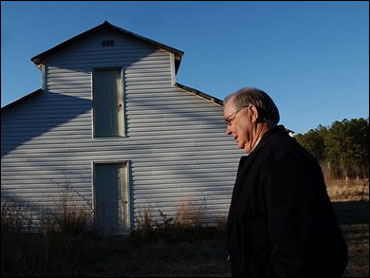 Robert Brooks had a simple reason for why his Hooters chain - known as much for the tight T-shirts of its waitresses as for its cuisine - stayed in business.

Brooks, chairman of the restaurant chain, was found dead at his home Sunday. It was unclear how Brooks died, but the Horry County coroner's office told The (Myrtle Beach) Sun News that an autopsy would be performed Monday. He was 69.

Since opening its first store in Clearwater, Fla., in 1983, Hooters of America Inc. has expanded into 46 states and 19 countries. Hooters has about 61 million annual visitors.

Born on a tobacco farm outside Loris near Myrtle Beach, Brooks graduated from Clemson University with a degree in dairy science. According to a Newsweek article in June 2005, Brooks broke into the food industry with a milkshake formula that was used by restaurant chain Burger King.

In 1966, he founded Eastern Foods Inc., which started off selling nondairy creamer to airlines and now makes dressings and sauces as Naturally Fresh Foods. He continued as chairman of the company that has more than $100 million in sales each year.

He also had a few other businesses, including the White Water Country Club in Fayette County, Ga.; the Super Sports Co., which makes merchandise sold in Hooters restaurants; and, the World Business Center, a land development company in Atlanta.

He owned speedways in Lakeland, Fla.; Jefferson, Ga.; and Hudson, N.C.; and was co-owner of a video production company, Hallbrook Productions, which produces commercials for his ventures.

But he's best known for his Hooters restaurants. In 1984, he and a group of Atlanta investors bought expansion and franchise rights for the Hooters chain. He eventually bought majority control and became chairman.

"He was a wonderfully gifted businessman," said Brad Dean, president of the Myrtle Beach Area Chamber of Commerce. "He understood business, a lot more than just how to sell chicken wings."

Brooks tried to parlay the restaurant chain's success into an airline in 2003. At its peak, Hooters Air flew to 15 destinations, but the company racked up debt and stopped commercial flights earlier this year. The company now flies charters.

Brooks shared his wealth with his hometown, giving $2 million to Coastal Carolina University for its first football stadium, which was named Brooks Stadium in 2003. In 1996, he was named Entrepreneur of the Year by the Georgia Chamber of Commerce.