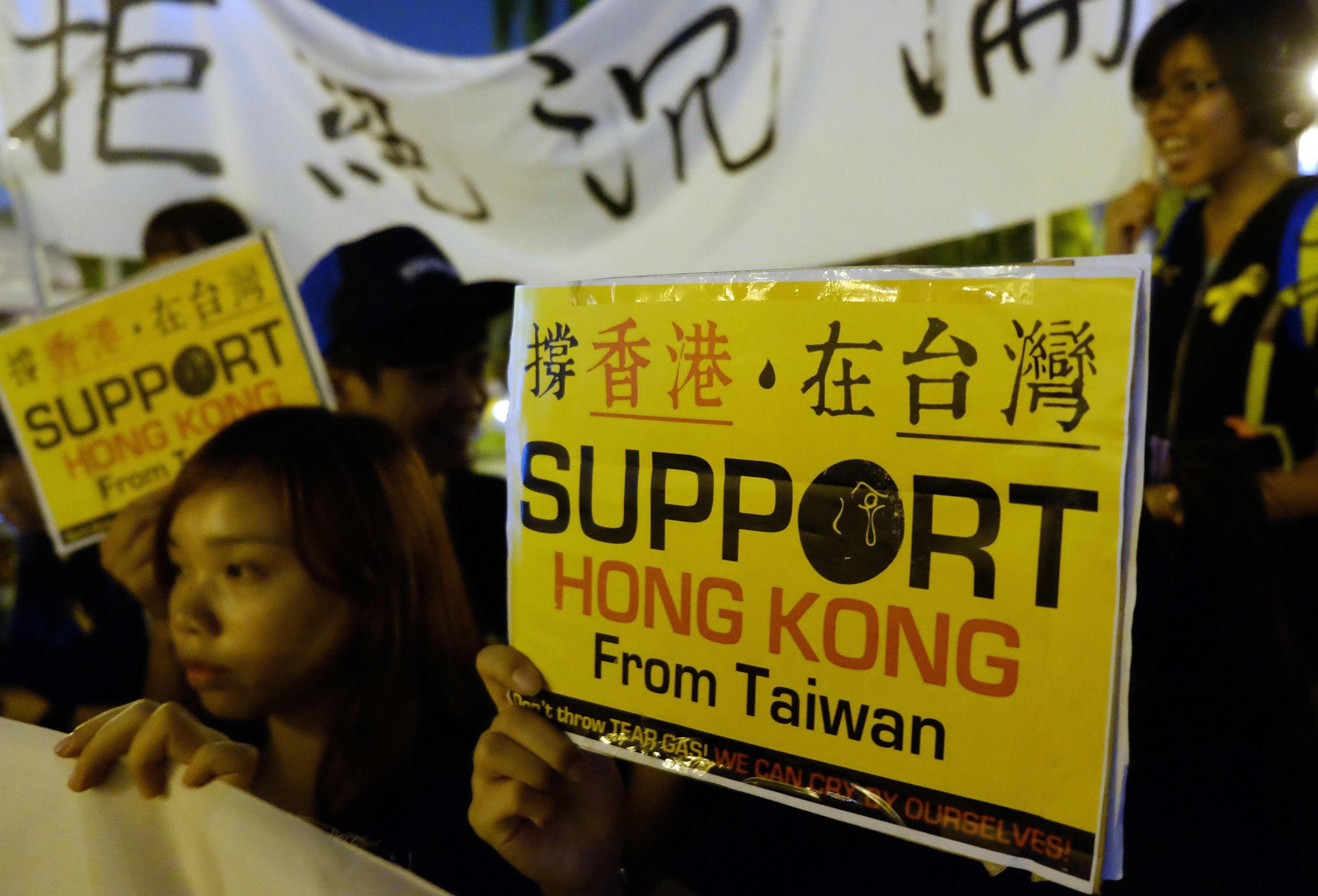 BEIJING -- Taiwan, an island that China's ruling Communist Party has long sought to bring into its fold under the same "one country, two systems" arrangement it has for Hong Kong, has thrown its support behind Hong Kong's pro-democracy movement.

Taiwanese leaders also have urged Beijing to live up to its pledges of autonomy in the former British colony or risk further alienating the Taiwanese public.

"If Hong Kong can soon achieve universal suffrage, it would be a win-win for Hong Kong and the mainland, and it can greatly help narrow the mental gap between residents on both sides of (the Taiwan Strait) and allow for the relations to develop positively," Taiwanese President Ma Ying-jeou said in a statement.

"Otherwise, it may deepen the antipathy of Taiwan's public and hurt the future of relations between the two sides," Ma said in the statement, dated Tuesday.

In August, Beijing rejected a proposal for open nominations of candidates for Hong Kong's first-ever leadership election, promised for 2017. Instead, all candidates must continue to be picked by a panel that is mostly aligned with Beijing.

In response, tens of thousands of people have rallied in Hong Kong's streets since late last week to press demands for genuine democratic reforms that are in line with "one country, two systems," the arrangement negotiated for the 1997 return of the city from British to Chinese rule.

That constitutional arrangement initially was formulated by China's late Communist leader Deng Xiaoping in an attempt to peacefully reunify with Taiwan, where the nationalist government of the Republic of China settled in 1949 as its last stronghold after losing a civil war to the Communists on the mainland.

The nationalist government's ambitions to reclaim the mainland later fizzled out, and the island became a self-governing democracy, although there has never been a formal declaration of independence.

Last week, Chinese President Xi Jinping put forward the "one country, two systems" arrangement for Taiwan again, only to see it openly rejected by both Ma and Taiwan's opposition party.

Speaking about the Hong Kong pro-democracy protests, Huang Di-ying, spokesman for Taiwan's opposition Democratic Progressive Party, said the city's residents had received "a birdcage election law that made a mockery of what the people of Hong Kong had come to expect."

On Tuesday, Taiwan's governmental Mainland Affairs Council issued a statement declaring its support for the pro-democracy movement in Hong Kong and invoking its significance for all Chinese people.

"People of Hong Kong have long had high hopes for the implementation of universal suffrage, using it to test if the mainland has truly fulfilled its promises under 'once country, two systems,'" the statement said.

Should Hong Kong's democracy move forward, the council said, "it will not only ensure the long-term stability of Hong Kong, but also be of profound significance to the long-term development" of relations between China and Taiwan and "for the development of democracy and rule of law for the entire Chinese people."