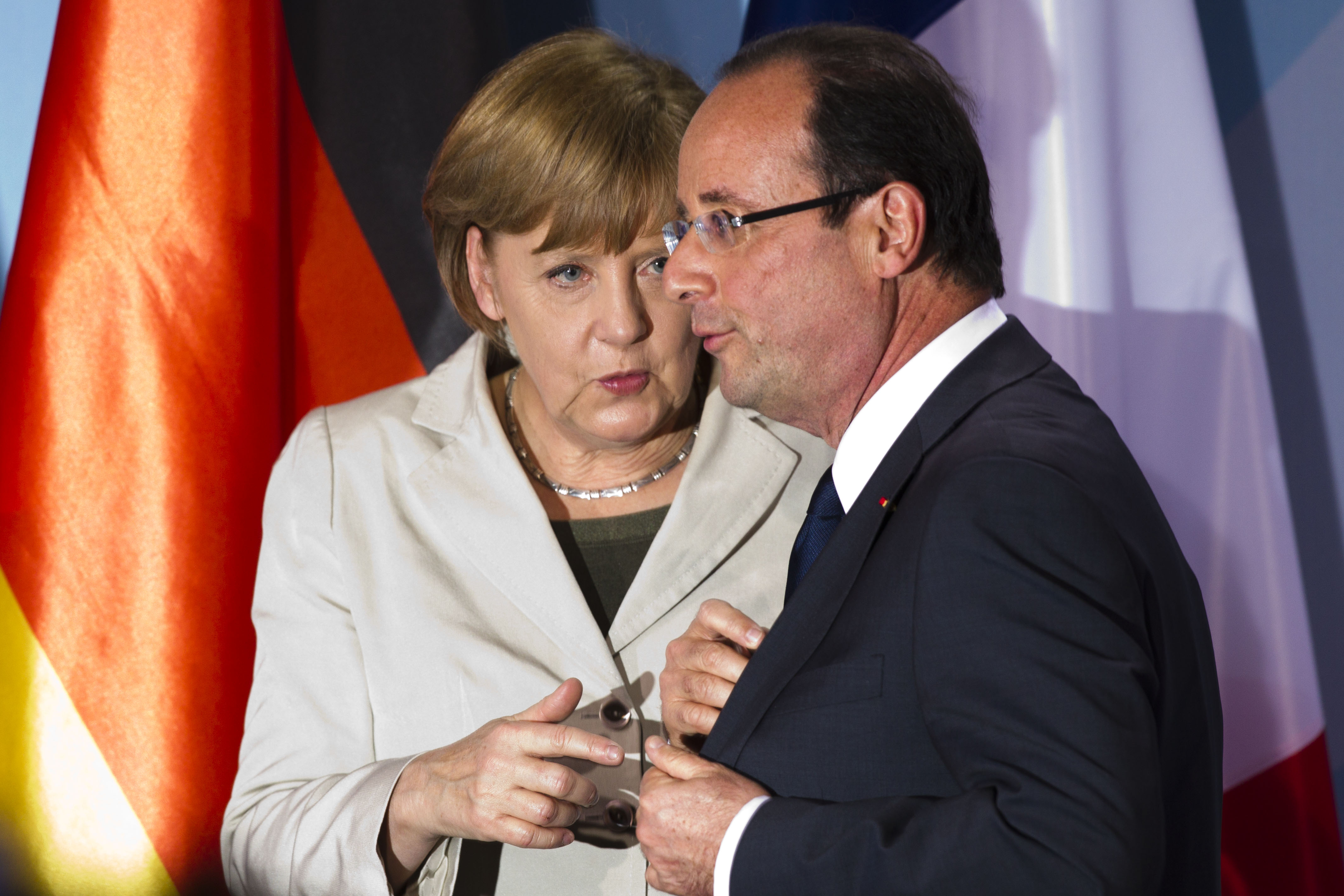 The conservative Merkel and Hollande, a Socialist who took office Tuesday, talked up their commitment to building a solid relationship after an election campaign in which Merkel backed then-President Nicolas Sarkozy, her key ally so far in tackling Europe's financial troubles.

Hollande has criticized Merkel's austerity-led approach to the continent's debt troubles and called for more policies geared toward boosting economic growth as opposed to just cutting government spending. During his campaign, he also called for the European budget-discipline pact pushed by Merkel to be renegotiated.


Hollande said during a joint news conference after their first meeting he "wanted to show that the Franco-German relationship is a constant for the French president" with his visit, which came just hours after he took office.

"We are aware of our responsibility, as Germany and France, for a good development in Europe," Merkel said. "Carried by this spirit, I believe we will of course find solutions for the different problems."

Merkel argued that the pair's differences have been overstated. Still, the disagreement over the budget pact, known as the fiscal compact, raised concerns ahead of Tuesday's meeting about the future strength of the relationship between Germany and France, the eurozone's two biggest economies.

Hollande said that "everything that can contribute to growth must be put on the table by everyone." He cited possibilities ranging from improving competitiveness, embraced by Merkel, to jointly issued eurobonds, which she has fiercely resisted.

The French leader gave no direct answer when asked if he is still demanding a renegotiation of the existing fiscal compact.

Once ideas for generating growth have been thrashed out, he said, officials will look at "what the legal ways of implementing them are; and it is at the end of this work that I will be able to answer your question."

An informal meeting of European leaders on May 23 will be followed by a summit at the end of June.

"It will be very important that Germany and France present their ideas together at this summit, and we have talked about the preparation," Merkel said.

"I am for budget seriousness," Hollande said. But, he added, "I am for growth" because that is the only way to reduce debt and cut budget deficits. Merkel has talked increasingly about growth this year but has argued that it needs to be generated by structural reform instead of relying on borrowing more money to finance greater government spending.

Hollande said he wants to work with Germany "for the good of Europe" and that he envisions "a balanced and respectful relationship."

Even as they hammer out how to stimulate greater growth, Merkel, Hollande and their fellow leaders will keep a nervous eye on events in Greece, which is to hold new elections next month after its politicians failed to produce a governing coalition following a vote that produced a deeply divided Parliament.

Both Merkel and Hollande stressed that they want to keep Greece in the group of nations that uses the euro currency, and that they want to help produce growth in Greece, but that existing agreements have to be maintained. Commitments to spending cuts and structural reforms have become hugely unpopular in Greece.

"I hope that the Greeks can express in these elections their attachment to the eurozone," Hollande said.

Merkel was blunter about the significance of the election. "We have to respect the fact that there are new elections in Greece," she said. "So we - I speak for myself - will make clear that we have the wish that Greece can stay in the eurozone, that its citizens will vote on that, and that part of this is that the agreements of the memorandum (with creditors) must be kept to."

Hollande's trip to Berlin got off to a stormy start when his plane was hit by lightning shortly after taking off. The aircraft returned to the Villacoublay air base outside Paris, and Hollande continued to Berlin on another plane. "We're very glad that he came to us in Germany on the day of his inauguration, and we're even more glad that he did so although lightning struck," Merkel said as she opened Tuesday's press conference.

"Perhaps this is a good omen for our cooperation," she said.