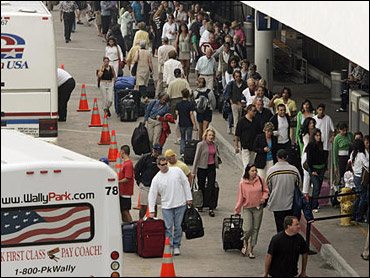 Anyone who took an early flight for a Memorial Day getaway has already gotten a taste of what summer air travel will be like: full planes, crowded airports and weather delays.

Airlines said they carried more passengers than usual Thursday, the kickoff of the summer season. Flights were delayed to some of the biggest airports – Chicago O'Hare, Boston Logan, Newark, N.J., New York LaGuardia and Fort Lauderdale, Fla. – according to the Federal Aviation Administration.

Despite rising prices, the travel industry predicts Americans will be traveling in record numbers this summer with Florida, California, Nevada and New York the top preferred destinations.

"Every sector of the travel industry will be up, up, up," according to Dr. Suzanne Cook, senior vice president of research for the Travel Industry Association of America, in a press release.

For this holiday weekend, "we expect over 37 million people to travel overall, and of that, 31 million, about 84 percent, will be going by car. That's about a 2 percent increase over last year," said the American Automobile Association's Mantill Williams on CBS News' The Early Show.

"In the last two weeks, every flight I've taken has been delayed," said passenger Rick Rude.

One of every four flights this year is being delayed or cancelled, and delays now average 52 minutes, longer than those which clogged airports with frazzled passengers in the summer of 2001. But aviation officials warn the air travel crunch is getting worse.

"We are heading into the toughest part of the year, without question," warned FAA administrator Marion Blakey.

Security-related delays are a concern, and so is one thing that no one controls: Mother Nature.

"In bad weather, that's when it shuts down," said Jack Evans, spokesman for the Air Transport Association, the industry group for major airlines.

Hot, humid air produces summer thunderstorms, typically in a zone that stretches from Texas to Michigan. They're too high to fly over, too dangerous to fly through and often too wide to fly around.

At hub airports — especially Chicago's O'Hare International — bad weather can combine with huge numbers of passengers to cause delays that cascade through the entire system. That's what happened in 2000, forcing thousands of passengers to sleep on terminal floors or sit fuming while their planes lingered on runways for hours.

Much has been done to improve things since then. Airports have added runways and terminals and improved efficiency, and the FAA has adopted new strategies.

But the system has yet to be tested during a bad thunderstorm season, and the signs so far aren't encouraging.

Many were taking advantage of cheap ticket prices. The average airfare for a 1,000-mile flight is now $118, 20 percent lower than it was in 2000, according to Transportation Department Inspector General Kenneth Mead.

Bargain airfares allowed Nancy Cross, a physician's assistant from Ashburn, Va., to take her husband and two stepdaughters with her to Orlando, Fla., where she was attending a medical conference.

Cross couldn't believe the security line. "I can't even see where it begins," she said, standing on tiptoes.

At least the weather was good.

While the number of leisure trips is up, the number of nights away from home continues to decline from 7.6 nights last summer to 7 nights this summer on travelers' longest trips, said the Travel Industry Association. Travelers plan on spending an average of $1,019 on their longest leisure trip this summer, a decrease of 7 percent from summer 2004 ($1,101).

"Again, what we see here is a trend to take more trips during the year of shorter duration. So while the spending per trip is down, the number of trips is up," said TIAA's Cook.

"I think these high gas prices actually historically have not prevented people from traveling. I think the people have to plan for it, budget for it," AAA's Williams told CBS.

But Memorial Day Weekend is only the second- or third-busiest travel time of the year.

"As far as the roadways are concerned, usually we have the highest concentration of travel usually on that Wednesday before Thanksgiving," Williams said.

Still, to avoid traffic congestion, AAA advises leaving before noon on Friday or waiting until Saturday morning on a holiday weekend, and not waiting until the last minute to return.