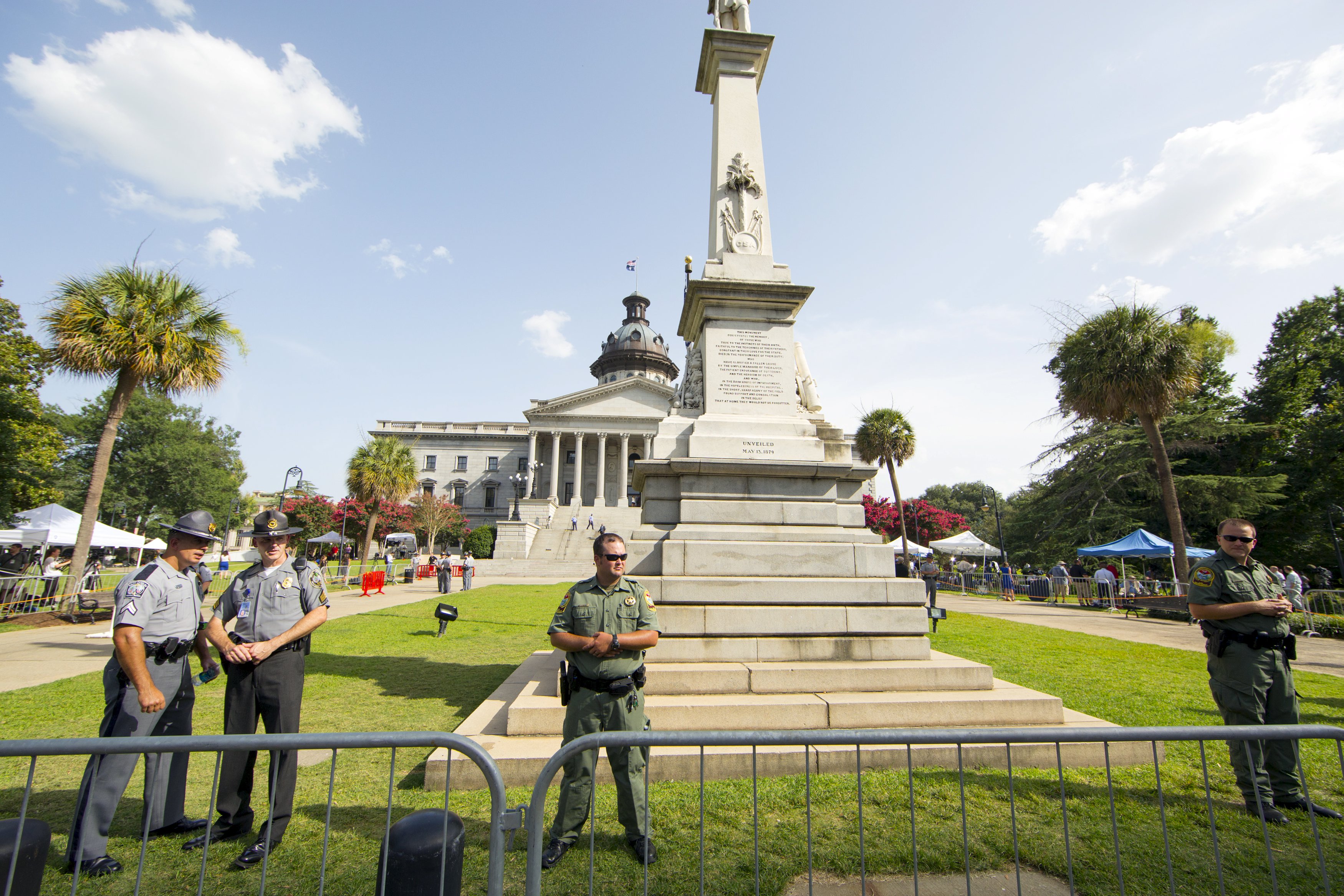 COLUMBIA, S.C. -- With protracted emotional debates and raucous protests behind them, South Carolina officials were preparing Friday to quietly and quickly remove the Confederate flag from the Statehouse where it has flown for more than a half-century.

The state planned a simple, short ceremony at 10 a.m. to remove the rebel banner, which was surrounded in its final hours by ropes and barricades.

"We will bring it down with dignity and we will make sure it is stored in its rightful place," South Carolina Gov. Nikki Haley said.

A special armored van will take the flag to the Confederate relic room, where it eventually will be housed in a multimillion-dollar shrine lawmakers promised to build as part of a compromise to get the bill ordering the flag's removal through the House.

South Carolina's leaders first flew the battle flag over the Statehouse dome in 1961 to mark the 100th anniversary of the Civil War. It remained there to represent official opposition to the civil rights movement.

Decades later, mass protests against the flag by those who said it was a symbol of racism and white supremacy led to a compromise in 2000 with lawmakers who insisted it symbolized Southern heritage and states' rights. The two sides came to an agreement to move the flag from the dome to a 30-foot pole next to a Confederate monument in front of the Statehouse.

Thousands of people showed up for the transfer. Flag supporters shouted, "Off the dome and in your face!" at protesters who wanted the flag gone, a line of police in special gear separating the two sides. A pair of Citadel cadets, one white and one black, lowered the flag from the dome as a dozen Confederate re-enactors marched to the brand new flagpole and raised the rebel banner.

Organizers didn't give out details of what will happen Friday, but said the removal will be short, simple and dignified. The flagpole will also be taken down, but no time frame has been announced for that.

The flag is coming down 23 days after the massacre of state Sen. Clementa Pinckney and eight others inside Charleston's Emanuel African Methodist Episcopal Church. Haley signed the bill with 13 pens. Nine of them went to the families of the victims.

At the ceremony, she was surrounded by Republicans, Democrats, and relatives of the church massacre victims, reports CBS News correspondent Omar Villafranca.

For weeks, demonstrators protested for and against the controversial symbol in a fight that sparked a nationwide conversation, Villafranca points out.

The measure to have the flag removed sailed through South Carolina's Senate earlier this week. But proceedings came to a crawl in the House, where lawmakers debated for more than 13 hours before adopting the bill just after 1 a.m. Thursday.

Authorities say they believe the killings were racially motivated. By posing with the Confederate flag before the shootings, suspect Dylann Storm Roof, who has not yet entered a plea to nine counts of murder, convinced some that the flag's reputation for white supremacy and racial oppression had trumped its symbolism of Southern heritage and ancestral pride.

"People say he was wrapped in hate, that he was a hateful person," said Democratic Rep. Justin Bamberg. "Well, his hate was wrapped in the cloak of that Confederate flag. That is why that flag is coming down."

Supporters of the flag were disappointed, but resigned.

"It's just like the conclusion of the war itself," said Rep. Mike Pitts, who submitted several amendments to fly a different flag on the pole that all failed. "The issue was settled, and the nation came back together to move on."

The move is already affecting South Carolina's future. The NAACP will consider ending its 15-year boycott of South Carolina's economy at its national convention this weekend. And the NCAA, which honored that ban, said it will resume holding championship events in the state.

Other states across the nation are moving on without their Confederate symbols. The rebel flag is gone from the Alabama Capitol, and the U.S. House voted that it can no longer fly at historic federal cemeteries in the Deep South. A city council committee in Memphis wants to move a statue and the remains of Civil War hero and slave trader Nathan Bedford Forrest out of a prominent park, and officials in Alaska want a new moniker for a U.S. Census district named for Confederate Gen. Wade Hampton.

Haley said the removal of symbols that have become divisive is the right thing to do for the family members of those killed at Charleston's Emanuel AME.

"We saw the families show the world what true grace and forgiveness look like," Haley said. "That set off an action of compassion by people in South Carolina and all over this country. They stopped looking at their differences and started looking at their similarities."