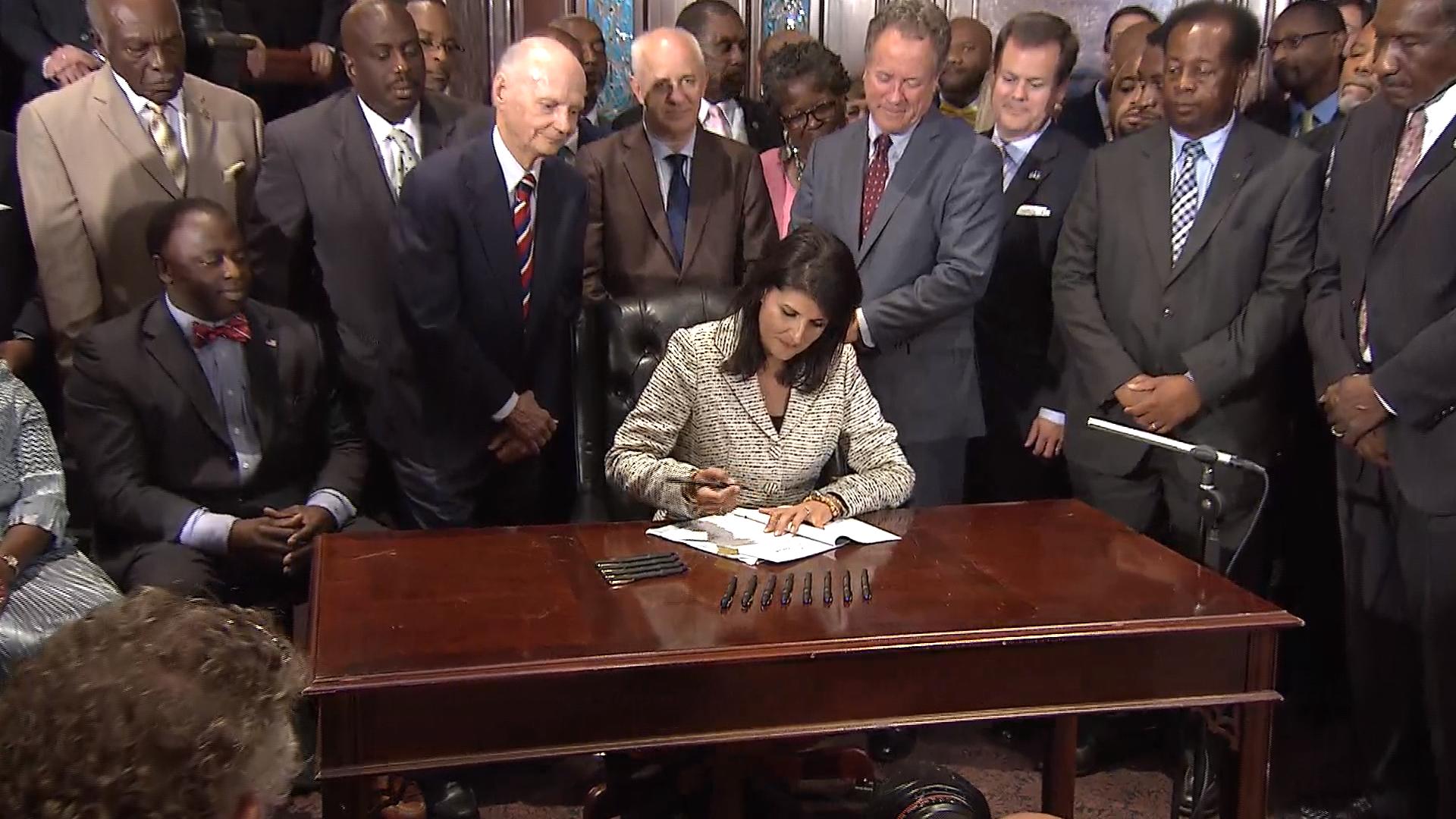 COLUMBIA, S.C. -- South Carolina Gov. Nikki Haley signed a bill on Wednesday which requires the Confederate flag to be removed from the state capitol. The signature comes as both houses of the state legislature voted within the past few days to take down the flag.

The flag will be taken down from the Capitol's front lawn and the flagpole it flies on during a ceremony at 10 a.m. Friday, said Chaney Adams, a spokeswoman for Republican Gov. Nikki Haley. Then, the banner will be taken to the Confederate Relic Room for display.

"And so what we saw was another action, and that action is that the Confederate flag is coming off the grounds of the South Carolina statehouse."

South Carolina was the first state to leave the Union in 1860 and raised the flag again at its capitol more than 50 years ago to protest the civil rights movement.

Haley pushed for the measure, which calls for the banner to come down within 24 hours of her signing the legislation. She has advocated for the removal of the flag since the June 17 racially motivated fatal shootings of nine black church members, including a leading state senator, at a Bible study in Charleston.

The man charged in the shooting, Dylann Roof reportedly took photographs of himself holding the Confederate flag.

At least one black lawmaker praised the removal of the flag, which comes after years of controversy over its meaning.

"South Carolina can remove the stain from our lives," said 64-year-old Rep. Joe Neal, a black Democrat first elected in 1992. "I never thought in my lifetime I would see this."

However, the removal of the flag was controversial and came with hours of contentious debate between South Carolina lawmakers.

Rep. Mike Pitts offered several amendments during the Wednesday debates, arguing that the flag is a reminder of how dirt-poor Southern farmers fought Yankees not because they hated blacks or supported slavery, but because their land was being invaded.

But Rep. Jenny Horne, a descendant of Confederate president Jefferson Davis became emotional to the contrary when arguing that the flag should come down.

She cried as she remembered the funeral of her slain colleague state Sen. Clementa Pinckney, the pastor of Emanuel African Methodist Episcopal church, who was gunned down in the Charleston shooting as his wife and daughter locked themselves in an office.

"For the widow of Sen. Pinckney and his two young daughters, that would be adding insult to injury and I will not be a part of it!" she screamed into a microphone.