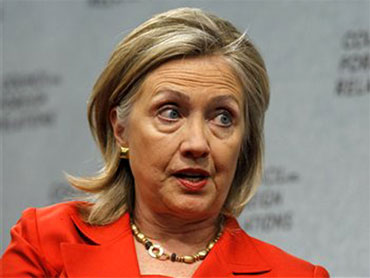 Secretary of State Hillary Rodham Clinton says plans by a small church in Florida to burn the Muslim holy book are "outrageous," and "aberational" and do not represent America.

In remarks made Wednesday to the Council on Foreign Relations, Clinton said it was "regrettable" that the tiny congregation had gotten so much attention for what she called a "distrustful and disgraceful" means of marking the ninth anniversary of the Sept. 11. 2001, terrorist attacks.

She urged the Rev. Terry Jones of the Dove World Outreach Center to cancel Saturday's planned Quran burning. Jones has vowed to go ahead with the event despite pleas from senior Obama administration officials, including Clinton, that it will put Americans abroad at risk.

"As of right now, we feel that this message is that important. We are still determined to do it, yes," he told "Early Show" co-anchor Harry Smith.

Despite admitting to CBS News in an interview Tuesday that his actions would almost certainly offend all the world's Muslims, Jones insisted Wednesday morning that his "warning" was "geared towards radical Islam," followers of which he claimed were trying to gain control and impose Muslim law in the United States.

"We see its influence around the world. We are sending a message to them that we don't want them to do as they appear to be doing in
Europe," Jones told CBS News. "We want them to know if they're in America, they need to obey our law and Constitution and not slowly push their agenda upon us."

"We are advancing America's interests and making progress on some of our most pressing challenges," she said in remarks prepared for her speech. "Today we can say with confidence that this model of American leadership works, and that it offers our best hope in a dangerous world."

Critics question whether the administration's foreign policy efforts are paying off, given Iran's refusal to negotiate over its nuclear program, continued stalemate in the Israeli-Palestinian conflict and an uncertain outlook for a successful conclusion to the wars in Iraq and Afghanistan.

The administration also has made no discernible progress in getting North Korea to give up its nuclear weapons program.

Last week Clinton hosted Israeli and Palestinian leaders for the first direct peace negotiations in nearly two years, and those talks are to resume next week in Egypt and Jerusalem.

According to excerpts of Clinton's speech provided in advance, she asserted that after years of war, many Americans are wondering what role the U.S. should play abroad in the years ahead.

"We will seize this new moment of opportunity this new American Moment. We are a nation that has always believed we have the power to shape our own destiny, to cut a new and better path," she said.