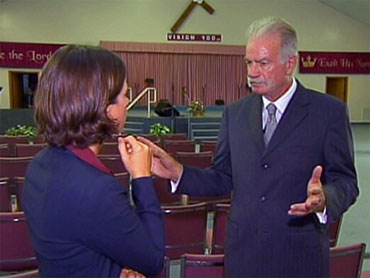 A Christian minister planning on burning copies of the Quran Saturday, the ninth anniversary of the Sept. 11 terrorist attacks, told CBS News that he's aware the act will likely insult all members of the Muslim faith.

"We are definitely probably insulting all Muslims," the Rev. Terry Jones of the Dove World Outreach Center told CBS News Correspondent Kelly Cobiella. "The fact that we offend them is the lesser of two evils."

Jones believes radical Islam could take over the United States and that the best way to fight back is by sending a radical message, Cobiella reports.

"Sooner or later we're going to have to say no to radical Islam," Jones told Cobiella. "We feel what we are doing is we are actually revealing the nature of Islam."

Despite such an acknowledgement from Jones and warnings from the White House and the top U.S. general in Afghanistan that the burning would jeopardize the lives of American troops, the minister intends to carry out his protest.

He left the door open to change his mind, saying he is still praying about his decision, which was condemned Tuesday by an interfaith coalition that met in Washington to respond to a spike in anti-Muslim bigotry.

Gen. David Petraeus warned in an e-mail to The Associated Press that "images of the burning of a Quran would undoubtedly be used by extremists in Afghanistan - and around the world - to inflame public opinion and incite violence."

But Petraeus' statement didn't make Jones back down.

"We understand what the general is saying, and I'm sure that it has somewhat some truth to it," Jones told Cobiella.

State Department spokesman P.J. Crowley echoed Petraeus, calling the plan to burn copies of the Quran "un-American" and saying it does not represent the views of most people in the U.S.

"While it may well be within someone's rights to take this action, we hope cooler heads will prevail," Crowley said.

Jones told the AP in a phone interview that he is also concerned but wonders how many times the U.S. can back down.

"We think it's time to turn the tables, and instead of possibly blaming us for what could happen, we put the blame where it belongs - on the people who would do it," he said. "And maybe instead of addressing us, we should address radical Islam and send a very clear warning that they are not to retaliate in any form."

Meanwhile, New York City Mayor Michael Bloomberg called Jones' plan "distasteful," but he said the minister has a right to do it.

Bloomberg was asked Tuesday about Jones' plan amid a national debate about a planned Islamic center near ground zero. The mayor is one of the center's strongest supporters.

The mayor said that he doesn't think Jones would like it if someone burned a book that Jones thinks is holy; however, Jones' planned act is protected by free speech rights, Bloomberg said, and "we can't say that we're going to apply the First Amendment to only those cases where we are in agreement."

Jones, who runs the small, evangelical Christian church with an anti-Islam philosophy, says he has received more than 100 death threats and has started wearing a .40-caliber pistol strapped to his hip.

The threats started not long after the 58-year-old minister proclaimed in July that he would stage "International Burn a Quran Day." Supporters have been mailing copies of the Islamic holy text to his Dove World Outreach Center to be incinerated in a bonfire that evening.

The fire department has denied Jones a required burn permit for Saturday, but he says he is going ahead with his event. He said lawyers have told him his right to burn the Quran is protected by the First Amendment whether he's got permission from the city or not.

Muslims consider the Quran to be the word of God and insist it be treated with the utmost respect, along with any printed material containing its verses or the name of Allah or the Prophet Muhammad. Any intentional damage or show of disrespect to the Quran is deeply offensive.

The interfaith group of evangelical, Roman Catholic, Jewish, and Muslim leaders meeting in Washington condemned Jones' plan to burn the Quran as a violation of American values and the Bible. Among the participants was Cardinal Theodore McCarrick, retired Catholic archbishop of Washington, D.C.; Rabbi David Saperstein of the Religious Action Center of Reform Judaism; and top officials from the Islamic Society of North America, the group that organized the gathering.

"This is not the America that we all have grown to love and care about," said Rabbi Steve Gutow of the Jewish Council for Public Affairs. "We have to stand up for our Muslim brothers and sisters and say, "This is not OK."'

In this progressive north Florida town of 125,000 anchored by the sprawling University of Florida campus, the lanky preacher with the bushy white mustache is mostly seen as a fringe character who doesn't deserve the attention he's getting.

Still, at least two dozen Christian churches, Jewish temples and Muslim organizations in Gainesville have mobilized to plan inclusive events - some will read from the Quran at their own weekend services - to counter what Jones is doing. A student group is organizing a protest across the street from the church Saturday.

The Vatican newspaper on Tuesday published an article in which Catholic bishops, including Archbishop Lawrence John Saldanha of Lahore, Pakistan, criticized Jones' plan.

"No one burns the Quran," read the headline in Tuesday's L'Osservatore Romano.

Jones, who has about 50 followers, gained some local notoriety last year when he posted signs in front of his small church proclaiming "Islam is of the Devil." The church is independent of any denomination but follows the Pentecostal tradition, which teaches that the Holy Spirit can manifest itself in the modern day. Pentecostals often view themselves as engaged in spiritual warfare against satanic forces.

Jones' Quran-burning scheme, after it caught fire on the Internet, brought rebukes from Muslim nations and an avalanche of media interview requests just as an emotional debate was taking shape over the proposed Islamic center near the Ground Zero site in New York.

The Quran, according to Jones, is "evil" because it espouses something other than the Christian biblical truth and incites radical, violent behavior among Muslims.

"It's hard for people to believe, but we actually feel this is a message that we have been called to bring forth," he said last week. "And because of that, we do not feel like we can back down."

FBI agents have visited to talk about their concerns for Jones' safety, as multiple Facebook pages with thousands of members have popped up hailing him as either a hero or a dangerous pariah.

His plan has drawn formal condemnation from the world's pre-eminent Sunni Muslim institution of learning, Al-Azhar University in Egypt, whose Supreme Council accused the church of stirring up hate and discrimination and called on other American churches speak out against it. Last month, Indonesian Muslims demonstrated outside the U.S. embassy in Jakarta, threatening violence if Jones goes through with it.