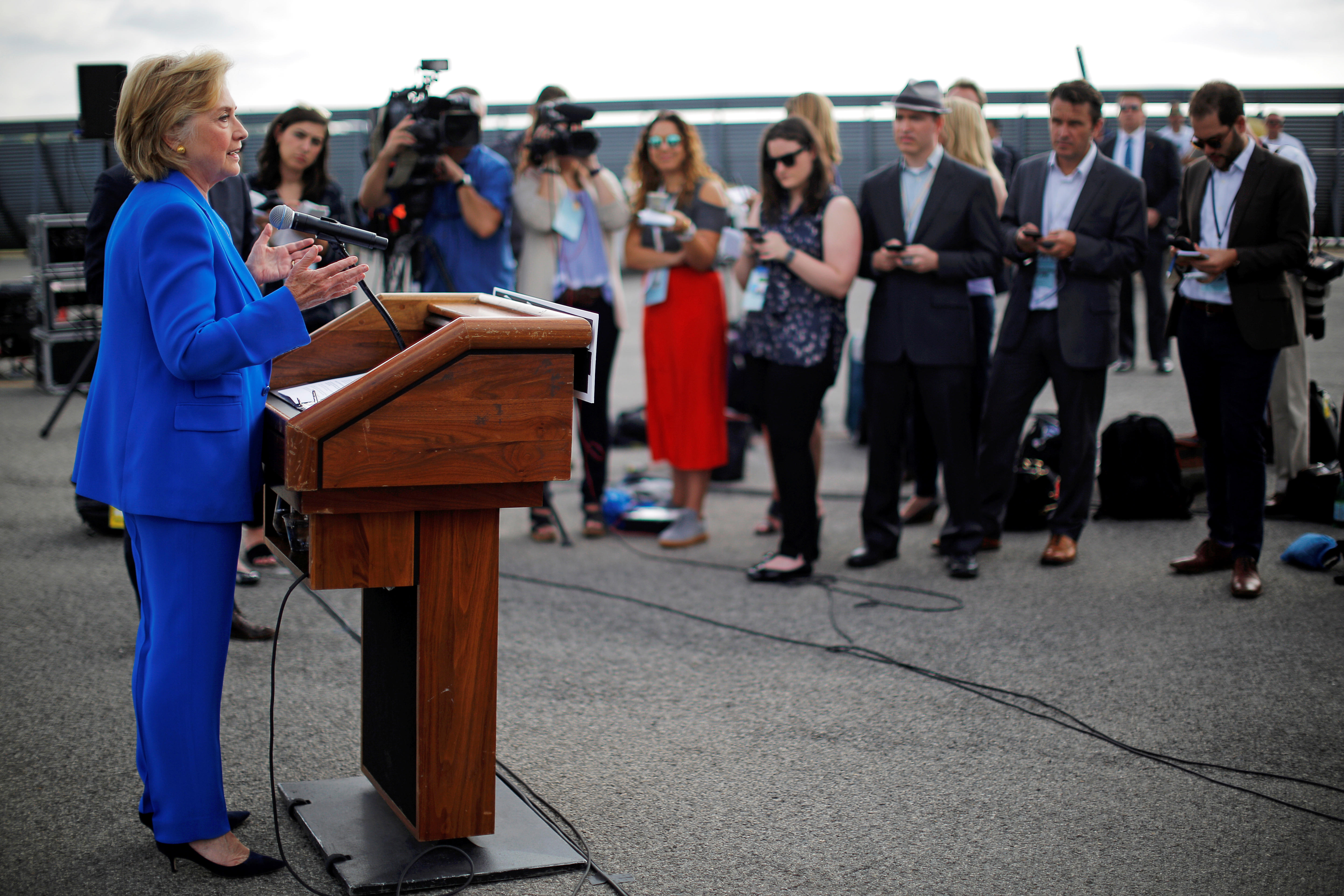 The morning after the two major party candidates participated in a “Commander-in-Chief” forum Wednesday night, Democratic presidential nominee Hillary Clinton came out swinging against rival Donald Trump, calling him a “gift for ISIS” and “temperamentally unfit and totally unqualified.”

Using his words against him, Clinton ran through a laundry list of Trump’s comments during the NBC News forum.

On the tarmac of an airport at White Plains, New York, Clinton called out how Trump “trash-talked American generals” when he said that they were “reduced to rubble” in Middle East conflicts and when he “suggested he would fire them.”

“Bizarrely, once again, he praised Russia’s strong man Vladimir Putin,” she said, noting that Trump had said he preferred the foreign leader to President Obama.

“That is not just unpatriotic and insulting to the people of our country, as well as to our commander-in-chief,” Clinton said. “It is scary.”

In a Trump administration, “Putin could do whatever Putin wants to do” and Trump would “make excuses for him,” she warned.

Clinton also blasted Trump’s proposals to take the oil in the Middle East as a way to combat terrorist organizations like ISIS.

“The United States of America does not invade other countries to plunder and pillage. We don’t send our brave men and women around the world to steal oil, and that’s not even getting into the absurdity of what it would involve,” Clinton said.

Of Trump’s policy proposals, the former secretary of state said: “That is a gift to ISIS.”

Citing counterterrorism expert Matt Olsen, Clinton said there was evidence of ISIS leaders “essentially throwing whatever support they have to Donald Trump.”

Clinton further previewed plans to convene a bipartisan meeting of top national security experts Friday, where people like Janet Napolitano, Michael Morell, and John Allen, would “discuss how to intensify our effort to defeat ISIS.”

In a rare move for the campaign, the Democratic nominee also took several questions from reporters.

Clinton also reiterated her Wednesday night promise that there would be no American ground forces in Iraq or Syria.

“I support the air campaign, I support special forces... I will absolutely be prepared to do whatever is necessary” to support Kurdish and Arab forces on the ground, Clinton said. But, she added, “There is no -- in my opinion -- path forward to [American] ground troops.”

When pressed about Trump’s statements discussing a national security briefing he received, Clinton chastised the GOP nominee for being “inappropriate and undisciplined.”

“I would never comment on any aspect of an intelligence briefing that I received,” she said.

Asked about Republican criticisms on her somber demeanor Wednesday night, Clinton said: “I don’t take any advice, anything seriously that comes from the RNC.  I know the difference between what we have to do to fix the VA, take the fight to ISIS -- than just make political happy talk.”