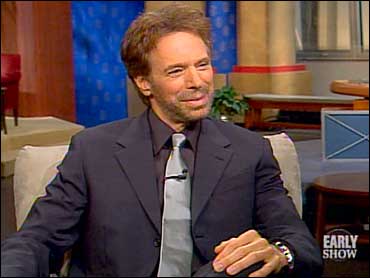 It produced, among other things, the top opening day and opening weekend grosses (both records just surpassed this month by "Spider-Man 3") and the record times to reach $200 million, $300 million and $1 billion worldwide. When the film ended its run in theaters, it had taken in more than $1 billion worldwide.

So how do you beat those numbers?

Producer Jerry Bruckheimer admits that "Pirates of the Caribbean: At World's End" has some big shoes to fill when it opens Memorial Day weekend.

"It's going to be very hard," he said in a recent interview on The Early Show. "You always want to break records. And, you know, we always look forward to doing that. But, you know, 'Spider-Man' came out at a perfect time because there weren't a lot of big blockbuster movies, so there were a lot of screens available. When we come out, there will be 'Shrek' in the marketplace — and 'Spider-Man' — so we won't get as many seats as initially."

Asked about the buzz that this is the best of the three "Prates" movies, the 61-year-old Detroit native says the last 40 minutes of the movie is "amazing film-making."

What's so amazing about it?

"Everything," Bruckheimer says. "The story, the romance, the humor, the action. It's just all packed in this 40 minutes.

"The cast is so good. These people are good. Keira Knightley is good, unbelievably beautiful. Orlando Bloom and Depp — I keep going back to that first, to the first 'Pirates' movie because this guy comes along and it was not what people envisioned and he created this completely crazy pirate."

Bruckheimer concedes that Depp's Captain Jack Sparrow character owes a big debt to Rolling Stone's guitarist Keith Richards on whom Sparrow is reportedly based. But Bruckheimer has another theory about Depp's characterization.

"You know, his (Depp's) better half works a lot," the producer explains. "So he stays home and is Mr. Mom. His daughter was watching all these cartoons.

"And so part of his character is from these cartoons that he was watching with his daughter. So between that and Keith Richards is how we got Jack Sparrow."

Richards has a small cameo in "At World's End." Bruckheimer dodged a question about whether Richards, as reported, plays Jack Sparrow's father: "You have to see the movie. Then we'll tell you about that."

But the producer pronounced the musician wonderful in his cameo role. "He had a great time doing it," Bruckheimer said. "We were thrilled to have him. He was so gracious on the set. He took pictures with everybody. When the scene was over, he stayed on the set and watched other people work."

There is a lot of secrecy surrounding the movie's plot and Bruckheimer was careful not to give anything away. "The writers can't even explain the third movie," actor Orlando Bloom was quoted as saying recently in an "Entertainment Weekly" interview. In that same interview, Depp said, to the delight of fans, that he would consider reprising the Sparrow role for a fourth time.

But Bruckheimer, whose television credits include the blockbuster "CSI" franchise, says the series was conceived as a trilogy almost immediately: "We started the first one. The writers come up with a terrific idea for one movie. And then we took that one movie and turned it in a trilogy."

Many scenes for the second and third movies were shot together in the Caribbean last year. "We did the location work in the Caribbean, two and three together," Bruckheimer said. "Then we went back and finished three, but it was all done in Los Angeles." Finishing touches were done just a short time ago, Bruckheimer admitted.