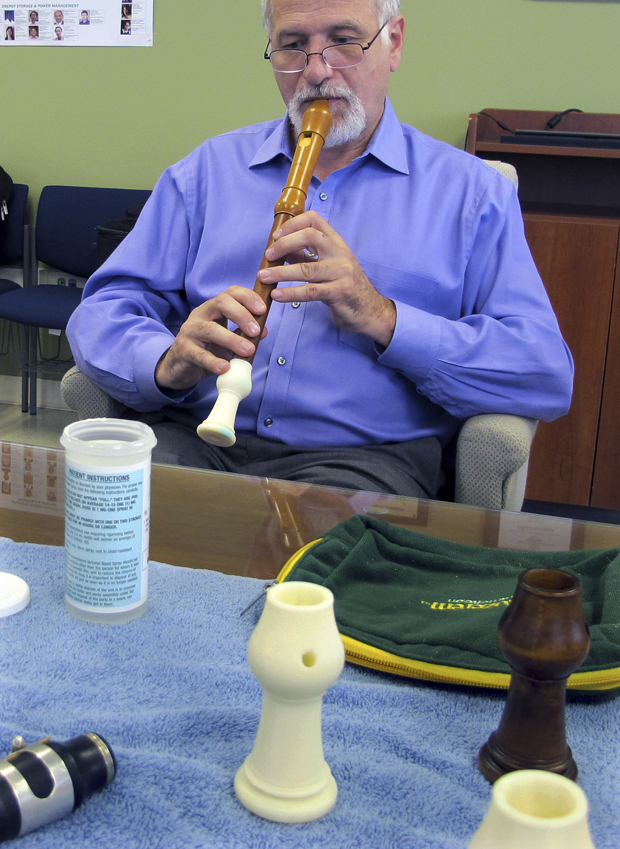 Researchers at the University of Connecticut are using medical technology to breathe new life into some antique musical instruments.

Dr. Robert Howe, a reproductive endocrinologist in East Longmeadow, Massachusetts, says his medical practice showed him how computerized tomography could make precise 3D images of body parts. As a student of music history, he realized the same CT scanning technology could help him study delicate musical instruments from the past.

Howe, who is also a doctoral student in music theory and history at UConn, last year brought his idea to music theory professor Richard Bass, who contacted Sina Shahbazmohamadi, an engineer and the school's director for advanced 3D imaging.

Together, they have developed a process for using CT scanning technology not only to make images of those instruments but also to print 3D copies of parts that will allow more of them to be played.

This week, they began seeking a patent for that process.

The CT scanning alone has yielded exciting results, including images that show the construction of an 18th-century English horn was much more complicated than experts originally thought. Because nobody would allow one of the rare and delicate instruments to be cut open, experts couldn't see the intricate set of bores and wooden pins used to hold it together, Howe said. The construction also didn't show up on a traditional X-ray because the pins are made of the same material as the horn.

A breakthrough by Shahbazmohamadi allowed the team to scan metal and wood at the same time. That allowed them to get exact 3D images of items such as a mouthpiece from one of the first saxophones made by Adolphe Sax in the 19th century.

"Only three original mouthpieces are known to exist in the entire world," Howe said.

Before this technology, an attempt to copy the handmade part would have required measuring it with metal calipers and other instruments, which would have left marks. An artisan would then have to translate those measurements into tooling for a duplicate, a time-consuming and costly process.

So instead, musicians have been jury rigging modern mouthpieces to fit old saxophones as best they can. The musical results can be disappointing, Howe said.

Paul Cohen, a saxophonist who teaches at New York University, said Howe's work could go a long way in helping experts understand what centuries-old music was meant to sound like.

"If they can accurately reproduce the dimensions in the mouthpiece that Adolphe Sax himself invented, it would be of fundamental, seminal importance in understanding our instrument," he said.

The UConn team scanned the original mouthpiece and, after some experimentation in density, produced a plastic replica on a 3D printer that can be fitted to the original saxophone. The team also has scaled the imaging data to size to make mouthpieces for a range of Sax's horns, from B-flat bass to E-flat sopranino.

"This is pretty darned good, and it's an $18 piece," Howe said. "The technology is not only very, very accurate, but very inexpensive."

The images can be kept on file, and as the technology improves, machines can make exact copies in the original materials, Shahbazmohamadi said.

The same technology could eventually be used to make copies of entire instruments or to repair broken ones. With the computer technology, flaws in the original can be fixed, he said.

Howe has already played one instrument, a 1740 recorder, with a replacement part made by the 3D printer.