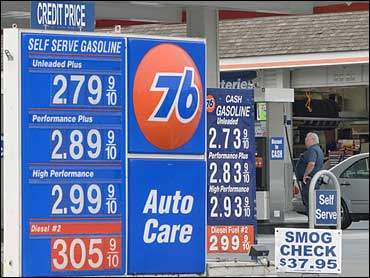 Skyrocketing crude oil prices are hitting Americans in the wallet in ways they might not imagine, increasing the price of everything from pizza delivery to patching a leaky roof.

Gasoline costs about $2.37 a gallon on average this week, reflecting global crude oil prices that are more than $65 a barrel. A year ago, oil cost $44 a barrel and gasoline $1.89 per gallon.

However, CBS News Correspondent Trish Regan reports that high gas costs have not stunted Americans' appetite for shopping. According to the latest numbers, America's shopping habits have grown more than 10 percent in the past year, the fastest growth in more than a decade.

As credit cards and home equity loans continue to give consumers easy credit, retailers are in for a very good year, with of without higher prices at the pump, Regan adds.

But gas prices will not decrease anytime soon. The Department of Energy warned Wednesday that gas prices could remain above $2 a gallon through much of next year.

Oil prices rose briefly to $66 a barrel on Thursday and settled at a new high amid strong demand and concerns about supplies. Light sweet crude for September delivery settled 90 cents higher at $65.80 a barrel, the highest level since trading began on the New York Mercantile Exchange in 1983.

"Americans are going to have to rethink this idea that somehow $1 gasoline or $1.50 gasoline is 'normal.' I think we're going to have to get used to higher prices," said Amy Myers Jaffe, associate director of Rice University's energy program, on CBS News' Up To The Minute.

"Americans have gotten by very lucky until now, and I think we can expect to pay more," Jaffe added, noting that countries like Japan and South Korea are paying $4 to $8 a gallon.

Many U.S. companies are passing on their rising fuel costs to their customers. Most large airlines charge per-ticket fuel surcharges of $20 to $87 for international travel, and many domestic fares have jumped more than $100.

Pizza makers are doing it, too. Major chains such as Domino's and Papa John's have added a $1 fuel surcharge in most major markets.

"Our restaurants have felt the pressures on the food cost side due to the higher ingredient costs related to fuel," said Chris Sternberg, a spokesman for Papa John's International Inc. in Louisville, Ky.

Few businesses depend more on surcharges than package delivery companies such as Federal Express, which has seen higher costs for jet fuel for its planes and diesel fuel for its trucks.

FedEx revises its surcharge monthly. For August it stands at 12.5 percent for express shipments and 2.75 percent for its slower ground service.

Fuel surcharges were first imposed in 2001. While unpopular, they allow those who ship via FedEx to factor for fuel price volatility.

"We are part of the supply chain. The surcharge allows them to plan ahead accordingly," said Lourdes Pena, a FedEx spokeswoman in Memphis, Tenn.

FedEx and rival United Parcel Service are racing to add delivery vans that run partly on electric power in a bid to cut fuel costs.

The federal Energy Information Agency, citing government forecasts released earlier this week, said Wednesday that pump prices are expected to average above $2.10 a gallon nationwide at least through the end of next year, assuming oil stays above $55 a barrel.

Higher fuel prices eat away at American incomes in less obvious ways, too.

Take roofer Larry Michaels in Kansas City. The asphalt he uses to patch leaking roofs and as a sealant under tiles and shingles is a byproduct of refining oil into gasoline.

"Almost all of our roofing materials, more than 90 percent of it, is made from byproducts of oil," Michaels said, explaining why he must pass on rising costs to customers.

Soaring gas prices also forced Michaels to restructure how he gets work.

"I never paid attention to the price of a gallon in my whole life," Michaels said.

He does now. To save on fuel, he lets bid requests build up for two days or more before driving to visit several potential clients at once.

Contractors who pave driveways, parking lots and roads also are raising rates to pass along rising prices for asphalt and other materials.

When oil prices rose sharply in the past, prices of related products followed, driving up inflation, the measure of rising prices across the entire economy

Inflation fears spiked early this year as crude oil surged above $50 a barrel, but the U.S. economy has proved flexible. Consumer-price inflation was a manageable 2.5 percent from June 2004 to June 2005.

Energy markets have been extremely jumpy about the refinery outages. Some traders said the troubles; the latest reported at BP PLC's plant in Texas City on Wednesday, is evidence that the industry and its aging infrastructure are having difficulty maintaining output at high levels.

But analysts and industry officials said refinery snags are not out of the ordinary for this time of year, when plants run hard to meet peak gasoline demand.