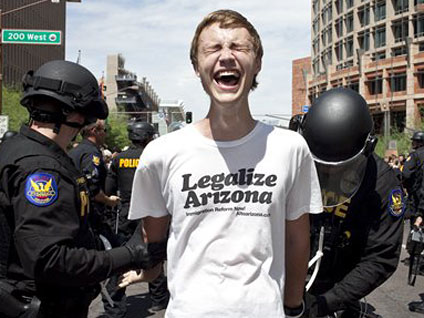 Carly Fiorina's nearly six-year reign at Hewlett-Packard Co. ended Wednesday as the company's board forced her out as chief executive, disappointed by her efforts to make the technology giant whose strongest business is printers more nimble and innovative. HP shares surged after the announcement.

Board members said they fired Fiorina, one of corporate America's highest ranking female executives, because she failed to execute a planned strategy of slashing costs and boosting revenue as quickly as directors had hoped.

"She made a lot of changes, including the merger with Compaq, layoffs, and reorganizations. A lot of employees resented her leadership," said CBSNews.com Technology Analyst Larry Magid.

Fiorina had championed the 2002 acquisition of Compaq Computer Corp. in 2002 despite fierce resistance from shareholders and directors. The board is now looking for better results from the more diversified operation.

"While I regret the board and I have differences about how to execute HP's strategy, I respect their decision," Fiorina, 50, said in a statement. "HP is a great company and I wish all the people of HP much success in the future."

Dunn said Wednesday morning in a conference call with financial analysts that directors had been discussing the change for "quite some time" based on a series of board meetings and consultations with senior advisers, ranging from venture capitalists to academics.

"Carly was brought in to catalyze a transformation of HP. She did that in a remarkable fashion, and she executed the merger with her management team in a superior fashion," Dunn said. "Looking forward, we think the job is very reliant on hands-on execution, and we thought a new set of capabilities was called for."

Fiorina's departure comes after months of speculation that HP needed a major shot of adrenalin to make it competitive with other technology companies, particularly rivals Dell Inc. and IBM Corp.

"Hewlett-Packard has recently been losing market-share in the PC business, which put her leadership into question," said Magid. "A lot of employees resented her leadership, and apparently the board was ready to see her go as well."

During its annual meeting in mid-January, HP's board of directors discussed shifting some day-to-day responsibilities from to other executives in an effort to improve the technology giant's performance.

"There was a certain style at Hewlett-Packard before Fiorina arrived. It was called the 'HP Way.' It was a very collegial and close-knit company. Fiorina changed all that, and frankly a lot of people at Hewlett-Packard are probably going to be happy about her departure," said Magid.

In recent months, Fiorina has been the target of intensifying criticism from technology analysts and the media for failing to execute an ambitious diversification strategy — an attempt to change Hewlett-Packard from a relatively marginal company that derived a disproportionate percentage of its profits from printers and ink into a Silicon Valley consulting and computing powerhouse.

"Long before Fiorina joined the company, its printing division had been doing very well, especially through the sale of supplies. A lot of people are concerned that her strategies have diluted that business and dragged the rest of the company down around it," said Magid.

Some Wall Street analysts have been suggesting that shareholders might be better off if the company were split into two or more pieces because the relatively dowdy printer business was sucking up resources and shifting focus from higher-profit opportunities in consulting services and areas of emerging technology.

"It appears that there's some incremental frustration," said Toni Sacconaghi Jr., an analyst with New York-based Bernstein & Co. "The change signals either the boards frustration or impatience with the status quo."

Wayman, who as recently as last year talked publicly of his desire to retire, emphasized Wednesday that he'd lead the company until the board picked a new chief executive, then return to his CFO role.

"I think I've demonstrated the flexibility to serve the company in whatever way is needed," Wayman said. "It's the board's top priority to find a new, permanent CEO, and that in no way is going to be an issue in regard to my retirement plans."

Dunn and Wayman said the board would consider all candidates but were leaning toward external applicants. They emphasized they did not foresee any other management changes at this time.

One of the lead dissenters to the acquisition of Compaq was HP director Walter Hewlett, the son of one of HP's late co-founders, who argued that HP was overpaying and couldn't afford to risk the difficulties of combining the two companies.

Fiorina took the helm at HP in 1999. The following year, the company added chairman to her list of titles, making her the first woman to hold all three top posts — president, CEO and chairman — at a major computer company.