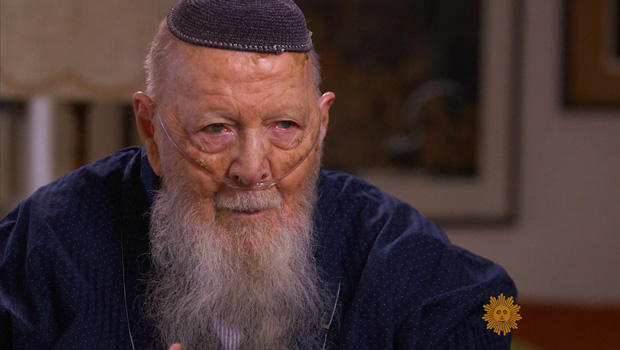 The enduring appeal of Herman Wouk's many novels speaks volumes -- and though he's well past the century mark, he's still writing, and also talking with our Tracy Smith:

In his Oscar-nominated role in "The Caine Mutiny" (1954), Humphrey Bogart made us believe he was crazy. His Captain Queeg is the skipper of a World War II minesweeper … and a study in paranoia:

Of course it's only a movie, but you may not know that it's drawn from real life.

The man who wrote "The Caine Mutiny," Herman Wouk, was once a naval officer himself. And he served for two years aboard a minesweeper called the Zane.

Now, at a rather reclusive 102 years old, he agreed to discuss it.

"People who read 'The Caine Mutiny' today might be surprised that it's actually based on truth," said Smith. "And was there a Captain Queeg?"

"Yes, there was a Captain Queeg," replied Wouk. "More than one actually. But he was unique in his way. He wasn't Humphrey Bogart. But he was a work of imagination drawn out of a real experience."

Talk about real experience: Wouk is a giant of American literature. "The Caine Mutiny" was only his first big success.

Wouk grew up in the Bronx, and after graduating Columbia University, found work writing for comedian Fred Allen's radio show.

"Did you at some point say, 'Okay, I need to stop writing comedy, and I need to do something more serious'?" Smith asked.

"Not in quite that way. But I was very tired of the joke writing. I felt there was more to do, but I really didn't know what to do beside that."

He wound up joining the Navy at the start of World War II. For gagwriter Wouk, it was a game-changer.

"I found my feet as a writer in the Navy," he said. "I was no longer trying to be funny or anything. I just reported the facts. That's what the Navy gave me. Cheers to the Navy!"

But if Wouk's two years at sea helped make his writing career, it was a night ashore that transformed his life.

He met Sarah at her birthday party, which he crashed.

Herman and Sarah were married in 1945, and in time she became his literary agent.

Smith asked, "What role did Sarah play in your writing?"

"It's just impossible to exaggerate there," Wouk said, pointing to her portrait. "There she sits looking at me, says, 'Don't mention me.' She says, 'You know, it's not important.'"

"But she was important?"

In 1951, with her encouragement, he published "The Caine Mutiny." It won him a Pulitzer Prize, and helped make him a celebrity.

But for all of its success, Wouk says "The Caine Mutiny" was only a start.

Smith asked, "Was there a moment when you knew, Wow, this is big?"

"Now without sounding conceited, I never thought of it as my big, big book," Wouk replied. "I knew that there was much more to do. I really did."

In Wouk's mind, the World War II books and movies up to that time were missing something -- so he started what he called "the main task."

Which was? "To, so far as I could, fix down in literature what happened in World War II and the Holocaust. That was my main task."

The result was a pair of novels for the ages:  the first, "The Winds of War," published in 1971, set on the eve of World War II.

"Did it meet your expectations?" Smith asked.

"Yes. It could have been better, deeper. But it told a story."

The book was a big bestseller, and, you may recall, it became a very big TV mini-series.

Seven years later, he finished the story with "War and Remembrance." The made-for-TV movie that followed broke new ground for prime time TV. The death camp scenes were actually filmed at Auschwitz, with no horrific detail spared.

"I was never interested in writing a history; I wanted to write a book about the war," Wouk said.

"But at the same time, you're teaching people history."

"Doggone right I am! That's the main task."

The Wouks moved to Palm Springs in the California desert in 1990:  The boy from New York City said it was his wife's idea, but added, "I love it here."

Sarah passed away in 2011, but she's still an important presence in his life.

"She believed in you," said Smith.

"Yes. More than that; she believed in me more than I did in myself at the time!"

"But you didn't want to get married at first? She had to kind of convince you?"

He says his latest book, "Sailor and Fiddler" (Simon & Schuster), a glance back at a remarkable life, will be his last.

Herman Wouk is a genius at telling stories; he just doesn't seem to care much for sharing his own.

Smith said, "I have a feeling you're not going to answer, but I'll ask you anyway: Have you stopped writing?"

"Have I stopped writing? Well, I always keep my diary."

"Beyond that, go find yourself another interview!" Wouk laughed.