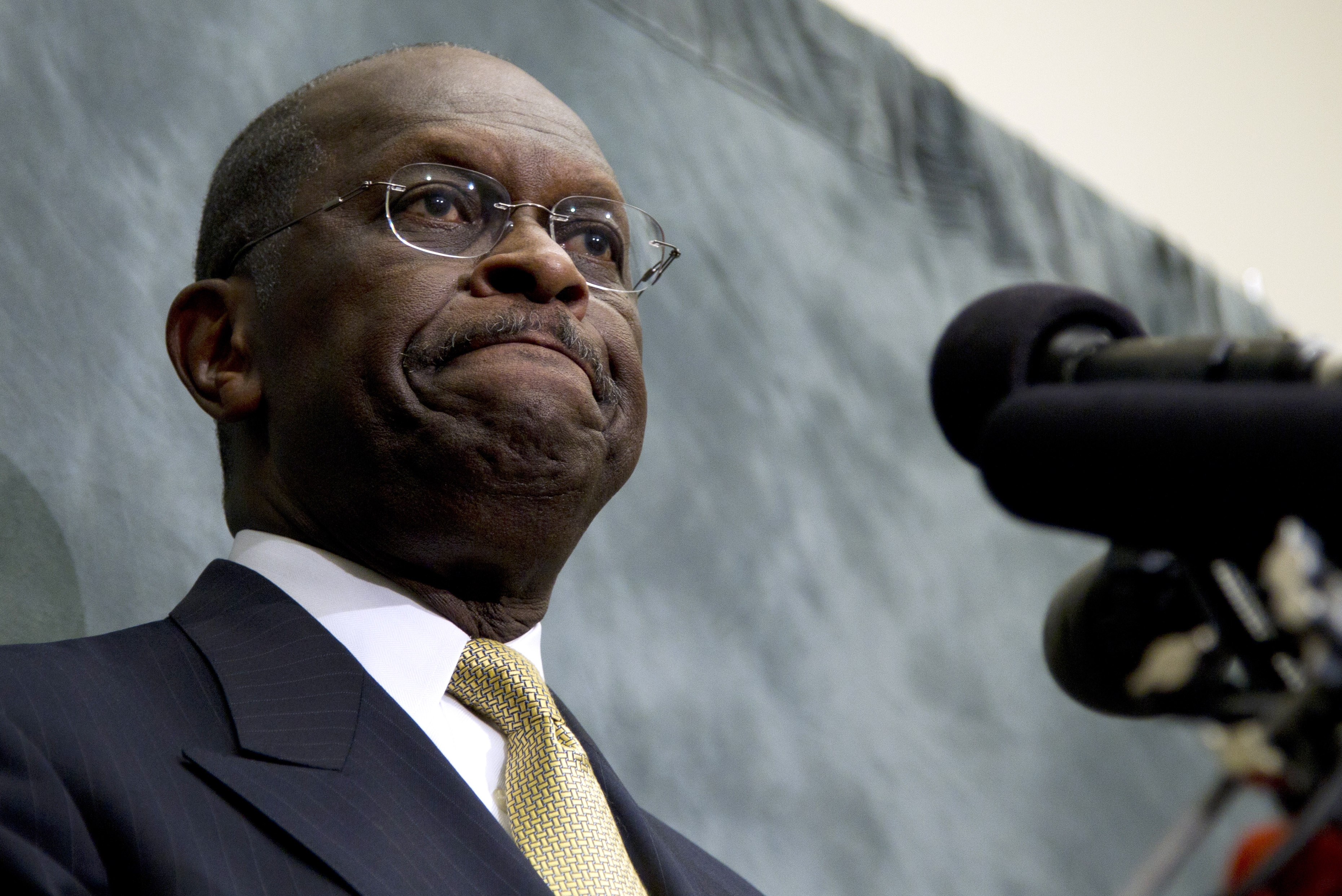 Republican presidential candidate Herman Cain spent the day deflecting questions about the 1990s era sexual harassment charges against him, but details continued to emerge -- and a third, unidentified woman said she considered filing a workplace complaint against Cain, the Associated Press reports.

The former National Restaurant Association (NRA) employee told the AP Cain invited her to his corporate apartment and described situations in which Cain allegedly spoke of how attractive she was. She spoke on condition of anonymity for fear of retaliation.

"Mr. Cain has said over the past two days at public events that we could see other baseless allegations made against him as this appalling smear campaign continues," he said in a statement. "He has never acted in the way alleged by inside-the-beltway media, and his distinguished record over 40 years spent climbing the corporate ladder speaks for itself."

Meanwhile, it remained an open question Wednesday as to whether one of Cain's other two accusers will be allowed to tell her side of the story.

Joel Bennett, the woman's attorney, told the CBS Investigative Unit that he's meeting with his client Wednesday night. For now, Bennett's client, one of two women who charged Cain with harassment during his tenure as the NRA's chief executive, cannot speak on the record because of a confidentiality agreement she signed as part of a settlement agreement with the NRA.

On Tuesday, Bennett told CBS News that the NRA "ought to waive the confidentiality and non-disparagement provisions and let the two women, if they choose to do so, come forward and tell their stories so that it can get a complete public airing."

The NRA said Tuesday it hadn't heard directly from Bennett, but the organization released a statement Wednesday afternoon saying the lawyer contacted the group that morning.

"An Association representative promptly returned his call and asked Mr. Bennett to contact the Association's outside counsel. Mr. Bennett indicated that he would do so tomorrow, after he met with his client," Sue Hensley, the NRA's senior vice president of public affairs communications, said in the statement.

So far, there is no word from the NRA on whether it will drop the confidentiality agreement. It's not clear if the second woman has a lawyer, or if she has requested to be allowed to speak on the matter. Sources tell CBS News the NRA is carefully looking at its legal obligations before deciding whether to release the women to speak.

Why Cain's story isn't like Clarence Thomas'sCondoleezza Rice to Cain: Don't play the race cardLawyer: Cain accusers should be allowed to talk

The New York Times reported that one of Cain's accusers received $35,000 -- a year's salary -- in severance pay to leave the organization.

Cain, for his part, said Tuesday he isn't sure whether he'll ask the NRA to release a woman.

Cain Wednesday morning delivered a speech at the Northern Virginia Technology Council in which he referenced forces out to "destroy" him personally, as well as politically. He maintained that his campaign will survive with the support of the public. Later, Cain spoke at a closed-door event with physicians in Virginia, where he got testy with reporters who pressed him on the matter as he left the event, and delivered a speech on Capitol Hill to the Congressional Health Caucus.

It's unclear how the developing story will impact Cain's frontrunner status in the race for the GOP nomination.

One former Cain staffer told CBS News, "He is very flirtatious with women whether it be a waitress or a staffer he just met. None of this is surprising... that is absolutely par for the course."

Oklahoma political consultant Chris Wilson, who worked for the NRA during Cain's tenure, said in a radio interview today that he witnessed some of Cain's behavior. If Cain's accuser is allowed to speak, he said, it will be damaging for the candidate.

"I was the pollster at the National Restaurant Association when Herman Cain was head of it and I was around a couple of times when this happened and anyone who was involved with the NRA at the time, knew that this was gonna come up," he said to Oklahoma radio station KTOK. "If she talks about it, I think it'll be the end of his campaign."

Wilson said the woman was a low-level staffer just recently out of college, but he declined to describe exactly what he witnessed, citing legal reasons.

Wilson released a statement later saying, "To be clear, and you can ask any of the reporters covering this story, I had nothing to do with leaking this in any way, and I've never discussed or shared this story with any of my clients - period."

So far, conservatives have largely rallied behind Cain. The campaign said in a release that they had received $400,000 in donations on Monday, after the allegations surfaced.

Forbes reports that Cain's camp is blaming former Cain staffer Curt Anderson for the story about the sexual harassment charges getting out. Anderson was a consultant to Cain's unsuccessful 2004 Senate campaign and now serves as an adviser to Cain's rival Rick Perry.

When asked directly if the Cain campaign was charging the Perry campaign with "stirring this up," Cain chief of staff Mark Block said "absolutely."

"Absolutely. And quite frankly, this is one of the actions in America that is the reason people don't get involved in politics. The actions of the Perry campaign are despicable," Block said. "Rick Perry and his campaign owe Herman Cain and his family an apology."

"Both the Rick Perry campaign and Politico did the wrong thing by reporting something that wasn't true from anonymous sources, and like I said, they owe Herman Cain and his family an apology," he added.

Anderson, however, denied that charge to CBS News, and the Perry camp called it "patently untrue."

"That is false, patently untrue, no one at this campaign was involved in this story," said Perry communications director Ray Sullivan.

Sullivan then suggested to CBS News and National Journal reporter Rebecca Kaplan that Mitt Romney's campaign is behind the allegations.

"I wouldn't put it past them," he said, stating that blog posts have noted that Cain's successor at the Restaurant Association "is a big Romney donor."

In response to the statement from Perry's team, the Romney campaign said it was "not true."