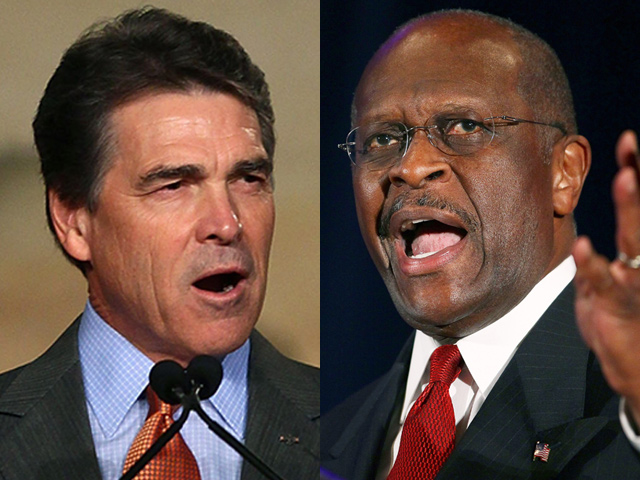 Rick Perry's presidential campaign says it is "absolutely not" responsible for leaking the fact that Herman Cain was accused of sexual misconduct while head of the National Restaurant Association to Politico, which broke the explosive story Sunday night.

"That is false, patently untrue, no one at this campaign was involved in this story," said Perry communications director Ray Sullivan.

Sullivan then suggested to CBS News and National Journal reporter Rebecca Kaplan that Mitt Romney's campaign is behind the allegations.

"I wouldn't put it past them," he said, stating that blog posts have noted that Cain's successor at the Restaurant Association "is a big Romney donor."

"There are much closer connections between the Restaurant Association, Cain and the Romney camp than there are with us," he said.

Federal Election Commission records show that Steven C. Anderson, who succeeded Cain as the Restaurant Association's CEO, gave $1,000 to Romney's campaign on July 14, Kaplan reports. He also gave a total of $1,000 to Cain in two $500 installments during Cain's 2003-2004 Senate campaign.

Lawyer: Cain accusers should be allowed to talk

Late Wednesday afternoon, Forbes ran a story suggesting that Cain's camp is blaming former Cain staffer Curt Anderson for the story. The story quotes Cain saying he briefed Anderson, then a campaign consultant, telling him about "one set of charges" from his time at the Restaurant Association.

"Those charges were baseless, but I thought he needed to know about them," Cain told Forbes. "I don't recall anyone else being in the room when I told him."

In a tele-town hall Wednesday night, Cain said, " We' ve been able to trace [the leak] back to the Perry campaign that stirred this up in order to discredit me, my campaign, and slow us down."

And on Fox News Wednesday afternoon, Cain chief of staff Mark Block said the Cain campaign was "absolutely" charging the Perry campaign with "stirring this up."

"And quite frankly, this is one of the actions in America that is the reason people don't get involved in politics. The actions of the Perry campaign are despicable," Block said. "Rick Perry and his campaign owe Herman Cain and his family an apology."

Anderson, now an adviser to Perry, denied involvement in leaking the story, telling CBS News/National Journal: "I've known Herman Cain for about 7 years. I was one of several consultants on his Senate race in 2004 and was proud to help him. I'd never heard any of these allegations until I read them in Politico, nor does anything I read in the press change my opinion that Herman is an upstanding man and a gentleman. I have great respect for Herman and his character and I would never speak ill of him, on the record or off the record. That's true today and it's not going to change."

The accusation came as the Associated Press reports that a third woman is alleging improper sexual conduct by Cain. According to the AP, the woman said he "made sexually suggestive remarks or gestures" and invited her privately to his corporate apartment. Cain's campaign denied the "baseless allegations."

They also follow comments by political consultant Chris Wilson, who worked for the NRA during Cain's tenure and said that he witnessed some of Cain's behavior. If Cain's accuser is allowed to speak, Wilson said, it will be damaging for the candidate.

"I was the pollster at the National Restaurant Association when Herman Cain was head of it and I was around a couple of times when this happened and anyone who was involved with the NRA at the time, knew that this was gonna come up," he said to Oklahoma radio station KTOK. "If she talks about it, I think it'll be the end of his campaign."