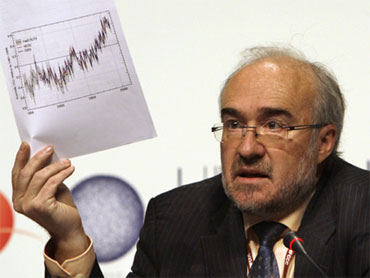 This skepticism predated the exposure of the East Anglia e-mails - those playful missives that reveal some of the most prominent climate researchers to be, if not outright charlatans, at least partisans.

Why don't people buy global warming? Doubtless the poor economy has pushed less immediate worries to the background. But even before the e-mails revealed that supposed neutral truth seekers were prepared to "redefine peer review," and engage in statistical sleight of hand "to hide" inconvenient truths, there were ample reasons for skepticism.

* It's chilly. There is the pesky fact that, contrary to the dire predictions of climate alarmists, there has been no measurable increase in world temperatures since 1998. Yet the amount of carbon dioxide pumped into the atmosphere has continued to rise. The computer models immortalized by Al Gore did not anticipate this; in fact, they predicted that temperatures would continue to rise steeply more or less forever, except that human beings would all die in 50 years or so with unknown (though presumably salutary) effects on the by-then Venus-like surface of planet Earth.

* Bullying. Every time a scientist or policymaker slammed his hand on a desk and growled, "The science is settled!" he demonstrated how remote he was from the scientific method. In true science, nothing is ever settled.

* Look at the graphs comparing sunspot activity since 1860 with global sea surface temperatures. They look like matching S curves (unlike the graphs comparing temperatures with CO2 output). Harvard astrophysicist Dr. Willie Soon notes that 2008 may have been a cold year because sunspot activity was low. The sun has been quiet in 2009 too. "If this deep solar minimum continues," Dr. Soon explains, "and our planet cools while CO2 levels continue to rise, thinking needs to change. This will be a very telling time and it's very, very useful in terms of science and society, in my opinion."

* Nuclear energy. Global-warming priests, while sermonizing about the need to spend trillions on new energy sources, almost never have a kind word for nuclear power - casting doubt on their motives. If the goal were really to reduce our carbon output (and not to recast our way of life), clean, efficient, affordable nuclear power would be the obvious choice.

* Fool me once. The same people whose hair is on fire now about climate change have dressed up in fright masks before. Thirty years ago they were (no joke) enormously agitated about the coming new ice age. From these same precincts (the Club of Rome, 1972) we were warned that the world was rapidly running out of oil, gas, aluminum, lead, zinc, copper, tin, and uranium. (We didn't.) At the same time, all of the smart people were absolutely convinced that overpopulation was the greatest threat to the globe and to humanity itself. Paul Ehrlich, author of The Population Bomb, offered in 1980 that "if I were a gambler, I would bet even money that England will not exist in the year 2000." That same year, the Carter administration issued a global forecast predicting that "the world in 2000 will be more crowded, more polluted, less stable ecologically . . . and the world's people will be poorer in many ways than they are today." Um, no.

The scaremongers' track record is poor. For people who seem to worship Mother Earth, they are oddly arrogant about their ability to understand complex systems like climate. Every day brings new discoveries about the incredibly complicated interplay of oceans, atmospheric gases, algae, wind, plants, animal excretions, solar radiation, and so forth.

The East Anglia e-mails reveal a priesthood becoming more and more hysterical as their certainty evaporates. Like all orthodoxies under duress, they are making war on heresy.

By Mona Charen:
Reprinted with permission from National Review Online