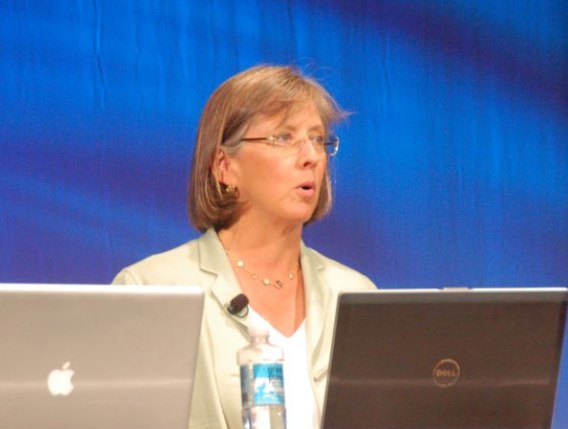 (CNET) When Kleiner Perkins Caufield Byers partner Mary Meeker was asked about Facebook's IPO during an interview at the D10 Conference Wednesday, she pointed to a key problem: That Facebook's shares were trading on the private market at $104 billion valuation before the company went public.

Actually, the shares traded even higher than that as the anticipation and hype surrounding the giant IPO neared.

Facebook (FB) was the most active stock on SecondMarket, an exchange for shares in private companies. And plenty of hedge funds and other big money managers were scooping up shares there -- often at prices far higher than where the stock is now.

Take a look at the chart below, which shows Facebook's average monthly share price -- and corresponding market value -- when it was trading on SecondMarket. To get to Facebook's current price -- around $28 a share -- you need to go back to the beginning of 2011. In fact, Facebook traded in the lower 30s on SecondMarket for most of 2011, and only began to shoot up after the company filed to go public and the hype and expectation started to build.

This was a problem. In a sense, Facebook was already a public company before it went public, and its rich $100 billion-plus valuation put , led by Morgan Stanley. The bankers needed to drum up enough interest that they could set the IPO price at least as high as it was on SecondMarket. Anything short of that would have been viewed as a flop.

One lingering question is how much pressure Facebook execs put on Morgan Stanley to meet this price, which raised a record-setting $16 billion for the company. Either way, that bar was set, and Morgan needed to get Facebook out at more than $100 billion, and that's exactly what it did.

What's happened since, of course, we all know. Investors have knocked $40 billion of value off the company. About 85 percent of those who bought Facebook shares on SecondMarket were professional money managers, and surely some of those people dumped the stock on IPO day. But you can bet plenty are kicking themselves for buying into the hype since no one expects Facebook to get back to a $100 billion valuation any time soon.