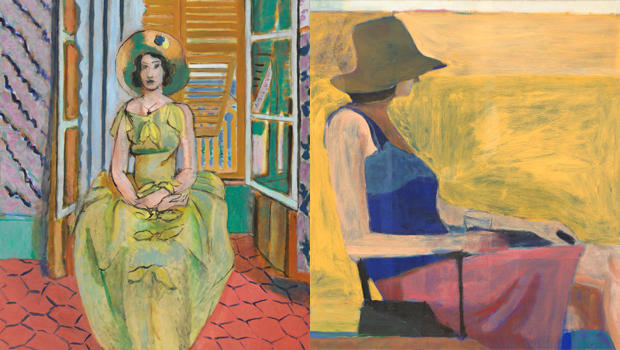 How do works by two painters from two different eras compare when we see them side by side? With Rita Braver, we take a look:

They were born nearly 50 years and an ocean apart.

And while French painter Henri Matisse is a household name in this country, many Americans have never heard of Richard Diebenkorn.

“And I’m hoping that that will change,” said curator Katy Rothkopf, who hopes viewers see the work of Matisse, the French Post-Impressionist master, and Diebenkorn, the influential but less-known American modernist, side-by-side for the first time.

Now on view at the Baltimore Museum of Art, the exhibit “Matisse/Diebenkorn” will travel to San Francisco in the spring.

When asked what are the greatest similarities between the two artists, Rothkopf replied, “They both loved color. And I think they both just had a magic touch with the paintbrush.”

“He was someone who was a real student,” Rothkopf said, “Certainly there were other artists that influenced him throughout his life, but no one more than Matisse.”

One reason that Richard Diebenkorn is less well-known than other important artists of the mid-20th century is that he lived and worked in America’s West -- far from New York, then the epicenter of modern art in America.

Born in 1922 in Portland, Oregon, and raised in the San Francisco Bay Area, Diebenkorn began drawing as a toddler, eventually going on to study art at Stanford.

His early work was in the abstract expressionist mode. “He loved abstraction,” Roithkopf said. “And that was certainly the style of the time.”

He first saw a Matisse in 1943, and was hooked -- over the years, traveling as far as Paris and St. Petersburg to view the older artist’s work. But Diebenkorn never sought to imitate Matisse.

“He felt very much that it was important to look to the past,” Rothkopf said. “And why would you not look at something that someone else had done? It didn’t mean that you were copying them, it just meant that they were inspiring you.”

Gretchen Diebenkorn Grant is the daughter of the late painter. She described her mother as the artist’s muse, though -- as seen in the artist’s 1961 “Sleeping Woman” -- a “little tired of posing, perhaps!” she laughed.

Braver asked, “Did you at any time while you were growing up realize that he was, indeed, influenced by Henri Matisse?”

“Oh yes,” she replied. “He had a wonderful collection of art books. And he had more Matisse books than anything else. People would give them to him all the time.”

And on the day she visited the Baltimore Museum of Art, Grant got to meet Sophie Matisse, Henri’s great-granddaughter, for the very first time.

“They look at the world in a sort of similar way. I’m looking around while I’m saying this, to see the sensibilities,” Grant said.

“Yeah, me too!” Matisse added.

“The work is not the same, but it’s very definitely related.”

“But they exchange kind of a mystical language between the two of them that I think comes out in this show, that’s just breathtaking,” Matisse said.

The parallels are unmistakable, including their contrasts of light and color.

Richard Diebenkorn died in 1993 at the age of 70, nearly forty years after Matisse’s death. Diebenkorn lived to witness his own success, but since he never met the man who influenced him along the way, their relationship would be left to the canvas -- and our imaginations.

Braver asked Grant and Matisse, “Could you imagine what a conversation between these two artists would have been?”

“I’m sure that my father would have loved to have met Matisse,” Grant replied.

“And how do you know they’re not, like, up there, looking down?” Matisse laughed.