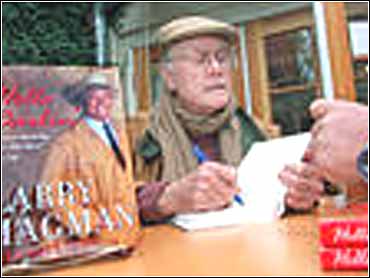 If Larry Hagman were writing his memoirs as J.R. Ewing Jr., his rascally character in the old TV soaper "Dallas," it would be loaded with recrimination against his enemies.

But Hagman isn't J.R. (tell that to those little old ladies who beat him over the head with their handbags for being so mean). And so his autobiography, "Hello Darlin': Tall (and Absolutely True) Tales About My Life" contains surprisingly little payback time.

"I didn't put anything in that I thought was going to hurt someone or compromise them in any way," he insists. "Not that I had too many of those things in my life."

The book, written with Todd Gold and published by Simon and Schuster, tells of drink and drugs, getting introduced to sex in a Mexican bordello, being so drunk at 18 that he was kicked out of the house by his mother, Broadway star Mary Martin, and of his escapades as the Mad Monk of Malibu.

Isn't he a bit harsh on Larry Hagman?

Hagman's madcap days ended in 1995 when he was diagnosed with acute cirrhosis of the liver, the result of a drinking habit that began when he was 14. It was also discovered that he had a malignant tumor on his liver. He was told that unless he had a transplant, he would die. After months of frantic waiting, a liver became available.

Hagman appears the picture of health, much younger than his 70 years. His nights in barrooms were exchanged for meetings with 12-step disciples. He swims regularly and works out in the gym. With his glasses and shiny pate he could pass for a college professor.

He was interviewed on a sun-swept afternoon at his Santa Monica home, an aerie high above the Pacific surf with a 180-degree view of the coastline from Point Dume to Palos Verdes and to Catalina, far out to sea. The place is decorated in high style by Hagman's wife for 44 years, Swedish-born Maj.

"Our other home is in Ojai," Hagman said, referring to the verdant resort town 50 miles northwest of Los Angeles. He produced a photograph of the place. Home? With a huge house and several outbuildings, it looks more like Xanadu in "Citizen Kane."

Hagman got comfortable on a deep sofa and related some of the highlights and lowlights of his extraordinary life. He was born in Fort Worth, Texas, to Ben Hagman, a small-town lawyer, and a 17-year-old singing hopeful, Mary Martin. They divorced when the boy was very young, and she went on to begin her dazzling career in New York. Young Larry spent his first 12 years in Texas and California with his grandmother. Then he lived for a year in Connecticut with his mother and her husband-manager, Richard Halliday.

"Richard and I didn't get along at all," Hagman recalled. "It was his turf, and he didn't want anybody else on it. The guy was an alcoholic and a speed freak; he was into amphetamine long before I ever heard of it."

When he told his mother of his ambition to be a cowboy, she sen him off to live with his father in Texas. On a hunting trip in Mexico, they visited a bar-brothel where the boy had his first exposure to sex. When he couldn't perform, he paid the woman $5 to say otherwise. His father and his friends were impressed when she raved about his prowess.

Hagman spent his last two years of high school in Texas, working summers in the oil fields. He returned to Connecticut and was sent off to Bard College at Annendale-on-Hudson, N.Y.

"I came home from school one day and drank a bottle of gin," he said. "I got loaded, and Mother said, 'You want to drink, you do it on your own time.' She gave me 50 bucks and I went to the big city and stayed in the Knickerbocker Hotel. It was such an old hotel that it ran on DC current. I plugged in my wire recorder and blew it right out."

Dropping out of college, he appeared in a circus and summer stock, becoming convinced that an actor's life was for him. During the Korean War, he spent four years with the Air Force in London, producing and directing service shows. While there, he met and married Maj.

Back in the United States, Hagman, who had gone into acting before the war, landed parts on and off-Broadway and became a regular on the TV soap, "The Edge of Night."

"I Dream of Jeannie" made him a star.

He remarked that he is better known for that 1965-1970 sitcom hit, which has been in continual reruns, than he is for "Dallas," which has been off the syndication circuit. (Half-hour sitcoms fare better in syndication than hour-long serials.)

Hagman has warm feelings for "Jeannie," but admits in his book that he clashed with director Gene Nelson, who wanted him dropped after 10 episodes. It was Nelson who got the gate.

As with "Jeannie," Hagman was constantly making suggestions for improving "Dallas." His first big tiff with management came when the producer-creator of "Dallas," Leonard Katzman, whom Hagman calls "a genius," resigned after disagreements with his co-producer.

Without Katzman, "Dallas" suffered a ratings drop. "I got him back," Hagman said. He did so by threatening to leave the series unless Katzman returned.

The second season of "Dallas" ended with the famed "Who shot J.R.?" cliffhanger, which was seen by an estimated 300 million viewers around the world.

"Now it was my turn to bargain; that's when I held out (for more money)," he recalled. "I went to England, where the show was tremendous. I was showing off, and it paid off. I knew all the publicity I got over there would trickle back to the United States. I knew (the Lorimar company) couldn't get somebody else. If they could, I was finished in the business."

He even met the royal family, and the Queen Mother demanded, "Now I want you to tell me, young man, who shot J.R.?" He replied, "Not even for you, ma'am." (It was Mary Crosby, Bing's daughter, as Kristin Shepard.)

Hagman got his raise, and "Dallas" lasted another 11 years.

His acting career simmered alonwith supporting roles in films like "Superman" and "S.O.B." plus stage work and TV movies. He has since appeared as politicos in "Nixon" and "Primary Colors" and in a TV movie, "The Third Twin."

Otherwise, he has been resting on his "Dallas" millions. He has remained alcohol- and drug-free since the transplant.

Does he miss the booze?

"No," he replied firmly. "I have so much time for other things. Drinking takes a lot of time, it really does. I can do a lot of things now that it wouldn't have even occurred to me to do before. And I wake up every morning feeling - wonderful!"

By Bob Thomas © MMI The Associated Press. All Rights Reserved. This material may not be published, broadcast, rewritten, or redistributed