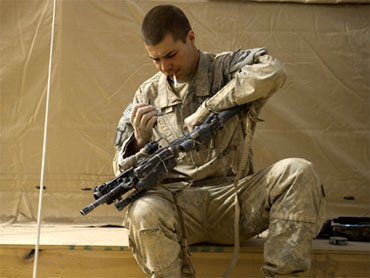 The U.S. and NATO are predicting heavier fighting this winter with more Taliban fighters staying in eastern Afghanistan instead of slipping over the border into Pakistan.

The prediction Wednesday by Maj. Gen. John Campbell came on the eve of the latest White House report card on the war that will show increased reliance on counterterrorism operations as part of the overall war strategy. The review also will identify insurgent safe havens in Pakistan as a stubborn problem that U.S. pressure on Pakistan has done little to address.

Campbell, commander of coalition forces in eastern Afghanistan, says that while attacks typically slow in winter, insurgents are expected to try to mount 15 percent to 20 percent more attacks in the volatile east than they did last year.

The president plans to stick with his pledge to start drawing home troops next summer after ordering one year ago that 30,000 more troops be sent to Afghanistan to blunt the Taliban's momentum. The goal of coalition forces is to shift control to Afghan security forces by the end of 2014.

A summary of the classified war report is expected to be released Thursday, when Mr. Obama will speak about the effort from the White House.

The review is expected to cite progress in combating the Taliban in Afghanistan, degrading senior al Qaeda leaders, and improving cooperation with the Pakistani government, Gibbs said. It will cite big challenges that still hamper the war effort, including Afghanistan's capacity to build up its own basic services and security forces, and the ability of militants to reside in Pakistan and undermine security in Afghanistan — "there's absolutely no doubt about that," Gibbs said.

Mr. Obama will not announce the pace or scope of the troop drawdown, Gibbs said; that is to be determined the coming months.

Gibbs said the report will leave no doubt that the war is going better now than it was before Mr. Obama increased the U.S. presence in Afghanistan.

It has also grown more deadly as the fighting intensifies. More than 680 international troops, including more than 470 Americans, have been killed in 2010, making it the deadliest year of the war. Hundreds of Afghan civilians have also died, most as a result of Taliban attacks.