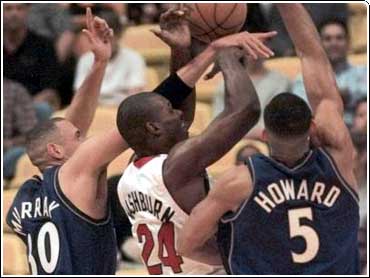 Alonzo Mourning and the Miami Heat took their time getting warmed up against the Washington Wizards.

Mourning scored 22 of his 32 points in the second half as Miami overcame a 17-point third-period deficit to beat Washington 99-92 on Friday night.

"We were like Jekyll and Hyde out there," said Mourning, who also had seven blocks and seven rebounds. "We were two different ball clubs."

Mourning has scored at least 20 points in a franchise-record 12 straight games, the NBA's longest active streak and one game shy of Mourning's career best.

Jamal Mashburn scored 17 of his 22 points in the first half for the Heat, who limited the Wizards to 35 second-half points. Miami's Tim Hardaway added 17.

"Our guys adjusted well in the second half and we simply attacked," said Miami coach Pat Riley, whose team has beaten Washington six straight times.

It was the fifth time this season that the Heat have come back from a double-digit deficit to win.

In his second game back after missing seven with fractured right ribs, Mitch Richmond led the Wizards with 21 points. Rod Strickland contributed 20 and Juwan Howard 16.

"Miami stepped it up a little defensively in the second half," Washington coach Darrell Walker said. "I'm still pleased with the effort."

The game was tied at 90 when Mourning hit two free throws at the 2:51 mark.

After Clarence Weatherspoon connected on one of tw from the line, Voshon Lenard hit a 3-pointer to give Miami a 96-90 advantage with 1:01 to play.

The teams then exchanged baskets and Lenard added a free throw for the final margin.

Howard made a basket 46 seconds into the third quarter to give the Wizards their biggest lead, 59-42.

A pair of 3-pointers by Hardaway and Richmond's basket gave the Heat an 85-84 lead with 7:55 left in the game.