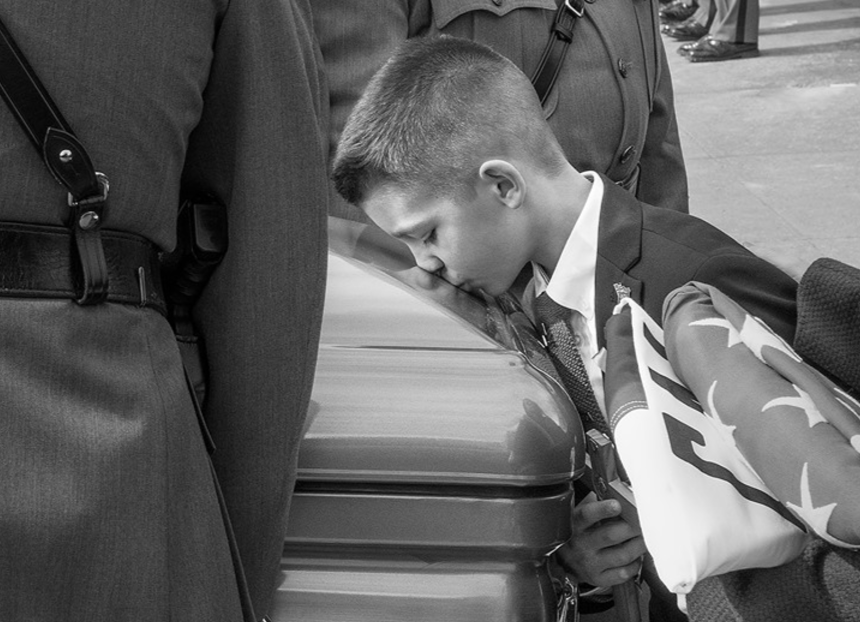 When 12-year-old Brian Falb Jr. stepped up to say goodbye at a funeral Sunday for his father, New York State Trooper Brian Falb, he paused for a minute, bent down and leaned in to kiss the casket. Hundreds of fellow officers, friends and family members were standing in line behind him, waiting to pay their respects, but in that moment, time stood still.

Photographer Damian Battinelli, who grew to become a close friend of the 47-year-old husband and father of four, snapped a photograph of the heartbreaking moment -- and now the black and white picture is going viral.

Falb, an 18-year veteran with the New York State Police and a World Trade Center first responder during the Sept. 11 terror attacks, died after a nearly year-long battle with brain cancer, which was directly related to inhalation of toxic air at Ground Zero in Manhattan.

“We’ve got a big problem,” Battinelli told CBS News. “Not only do we want to tell Brian’s story, but we want to continue the story of 9/11 cancers.”

Like Falb, Battinelli was a first responder on 9/11. He was diagnosed with bladder cancer a few years ago.

“I felt alone in the area. I didn’t know anybody who got cancer -- well, I knew other first responders, but they all seemed OK,” Battinelli said. “It was a low point of my life.”

Battinelli, who lives in Plattsburgh, New York, said his life changed when he met Falb and his family. Falb’s wife of 26 years, Mary, happened to call up Battinelli to ask him to shoot family photographs last year.

The Falbs helped Battinelli through the process to get cancer certified, which ensures him permanent health care.

In May, Falb discovered he had brain cancer. He underwent surgery to remove a tumor from his brain and recovery was going well.

When Battinelli heard about the surgery, he reached out to Mary, offering to take more family photos for free. In September, she took him up on his offer and they gathered near a barn near their New York home to take pictures.

“He put uniform on for first time since May when they found the cancer,” Battinelli said. “It was a pretty proud moment for him. He had never put it back on after those photos.”

But soon after, Falb’s health took a turn for the worse. Doctors found cancer on his spine, he suffered a stroke and died on March 13.

“His body just kind of gave up on him,” Battinelli said.

While planning his funeral, Mary called up Battinelli and asked him to photograph the funeral, something Battinelli has never done before. Of course, he said “yes.”

“I hope it’s something [Brian Jr.] will cherish for the rest of his life,” Battinelli said. “I hope someday he’s proud of it, because he should be.”

To state troopers, state officials and family, Falb was a hero.

“Brian Falb served the people of New York with the valor and dedication that embodies the very best of the New York State Police,” New York Gov. Andrew Cuomo said days after his death.

Bittinelli agreed, “When people say Brian was strong to the very end look at him, they weren’t lying. He knew things weren’t going very well, but he was still focused on getting back to work. He didn’t complain. He just fought a really, really hard fight.”