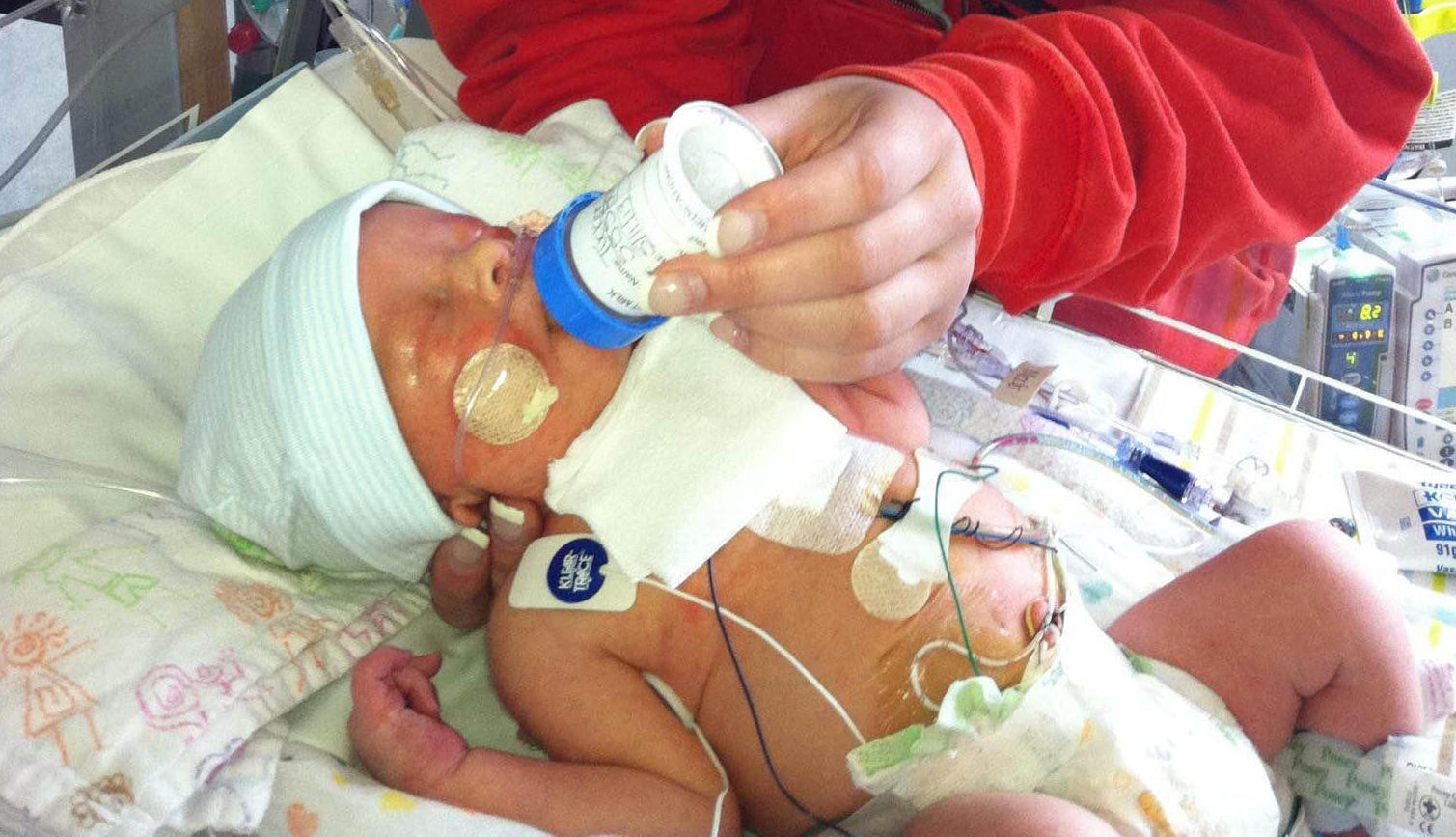 When Katie Rice and her partner, Mike Roussin, were expecting their second child, the Vermont couple went in for a routine 20-week ultrasound, excited to learn the sex of the baby. But along with the happy news that they were having a boy came some frightening information.

“All together, three doctors came in and did scans and then they told us they saw a mass on his heart and they weren’t really sure what it was,” Rice said.

The couple, from St. Albans, Vermont, soon learned it was a life-threatening tumor on their baby’s heart called an intrapericardial teratoma – a very rare diagnosis. The tumor forms in the sac surrounding the heart and is lethal if left untreated. Doctors can try to drain the fluid around the mass as the fetus grows and remove the tumor after delivery, but the strategy carries serious risks, and the child might not survive.

They were told that experts at the Children’s Hospital of Philadelphia (CHOP) might be able to help. After two trips to Philadelphia, they decided to move forward with a surgery that had never succeeded before. Surgeons would attempt to remove the tumor while the baby was still inside the womb.

Their case, along with seven other similar cases involving different treatments and outcomes, is highlighted in a recent study in the American Journal of Obstetrics and Gynecology. Theirs was the only case involving the prenatal surgery at 24 weeks of pregnancy.

Co-study leader and pediatric cardiologist Dr. Jack Rychik told CBS News that the first two times he saw Rice – appointments just a week apart – he could see that the tumor was growing quickly.

After conferring with colleagues, he said, “There was a uniform judgment we made. We saw them initially and then saw them about a week later and had documented the growth of the tumor and knew the fetus would not have survived if we hadn’t operated.”

Rychik, director of the Fetal Heart Program at The Children’s Hospital of Philadelphia, added, “The tumor can grow so wildly and it compresses the heart and ends the pregnancy.”

Just a few weeks after the ultrasound that first discovered the mass, a multidisciplinary team from CHOP – including experts from cardiology, surgery, imaging and obstetrics – performed the three-hour surgery.

Dr. Holly Hedrick, an attending pediatric and fetal surgeon at the hospital, said that timing played a key role in the the case.

“We just happened to have had some cases of the same diagnosis in the months leading up to it and they were very frustrating and really sad outcomes. And so when Tucker’s mom presented, we had just come off the heels of these other cases and the idea of ‘how can we make things better?’ She had really come sort of on the heels of that and those discussions. It was really dramatic – the tumor growth – and when we looked at some of prior cases and she was still OK, we knew that another week and we would have lost the war,” said Hedrick.

While fetal surgeries are still in the realm of “fantastic, amazing possibility,” and Katie Rice’s was a first-of-its-kind success, it was not the first fetal surgery, explained Rychik. Prenatal surgeries have been employed to correct spina bifida and lung tumors, for example.

“Nothing in medicine today is completely new. We build on the past. We took that knowledge and applied it in a situation where anyone previously identified with this type of tumor had died,” Rychik said.

For the operation, Hedrick said Rice was placed under general anesthesia and then they went through her abdominal wall to the uterus to reach the baby and remove the grape-sized tumor pressing on his heart.

Special monitoring kept fluids even in the uterus. The medical team also accessed the fetus’ tiny hands in order to provide IV fluids and medicines, and to monitor his oxygen level.

Rice said they were anxious as they waited out the rest of the pregnancy in a hotel in the Philadelphia area, close by so that CHOP doctors could continue monitoring her and her growing baby. Her father brought their 3-year-old son, Gavin, and the family dogs down from Vermont to keep up their spirits.

“The last half of the pregnancy we were on edge the whole time,” Rice said.

She had to take a leave of absence from her job and Mike, who worked for his family’s business, was able to take time off, too.

On May 9, 2013, Tucker was born. Rice said the doctors immediately swept him away for a few hours to stabilize his sternum, which had been opened during the fetal surgery and had not healed back properly. But overall, the surgery was a success.

“We have to go back to Philly once a year and he has to get blood work done once a year here in Vermont, but other than that, he’s a typical 3-year-old boy,” said Rice.

Rychik and Hedrick said that while breaking medical barriers is rewarding for the team at CHOP, the best part for them all is seeing Tucker growing up.

“Things are going beautifully,” said Rychik. “There’s an emotional aspect of changing nature and where nature intends a poor outcome and reversing it 180 degrees and giving a normal outcome to this child. To give this child, this fetus, a normal quality and duration of life as a unique human being.”