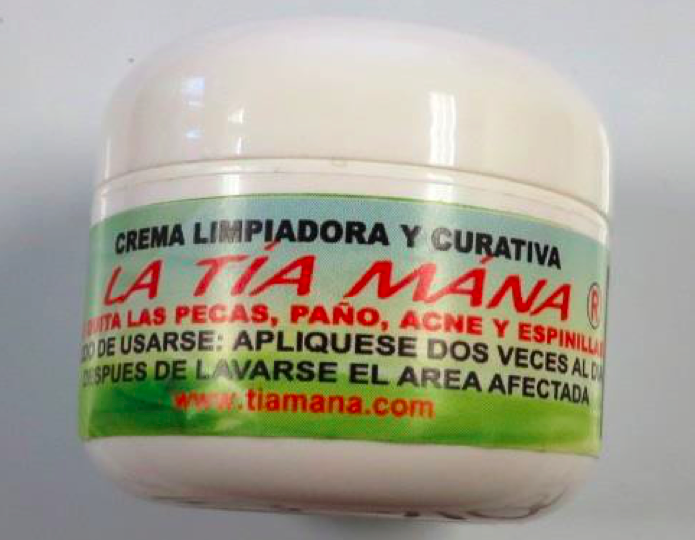 California health officials are warning consumers not to use a face cream because it contains mercury, a chemical that can affect the nervous system and other organs.

The Mexican-made face cream, sold under the name La Tía Mána and in unlabeled white cold-cream jars, were recently tested and came back positive for high levels of mercury, the California Department of Public Health (CDPH) said in a statement on their web site recently.

The facial creams were being sold at flea markets in California, but they can also be purchased online through eBay and on  Facebook. A Twitter feed touted the cream, with one tweet claiming it's "100% natural sin mercurio" — without mercury.

The company's Facebook page advertises the cream as a treatment for acne, freckles and age spots, claiming (in Spanish) that it's "the best cream to remove blemishes and spots on the skin."

Dr. Kenneth Spaeth, chief of occupational and environmental medicine at Northwell Health in New Hyde Park, New York, told CBS News that mercury is used in such products as a skin lightener. This is not the first time health officials have issued such warnings — just the latest.

"Most of these products are manufactured outside the U.S. Typically it's often intentional in skin creams because mercury has the ability to lighten the skin. It's used for blemishes or skin lightening. Unfortunately its' not commonly labeled," Spaeth said.

"Consumers should discontinue use of these products, as well as any skin cream that lists mercury, mercurio, mercurous chloride, cinnabar, or calomel in the ingredients, or is otherwise packaged without any labeling," said the CDPH, noting that so far, there have been no reports of illnesses linked with the products.

Mercury can harm the brain, heart, lungs and other organs. Symptoms of mercury poisoning include irritability, depression, nervousness, difficulty concentrating, fatigue, tremors, shaking or weakness, tingling or numbness in hands, feet or around the mouth.

Cosmetics that contain mercury can be dangerous even to the families of users, especially pregnant women, nursing mothers and babies and children, says the FDA.  Even breathing the vapors off of someone who is wearing the cream is unhealthy, Spaeth warned.

California has had cases in recent years of women, infants and teens seriously sickened by mercury-containing skin products.

"Even low doses of mercury can have a potential impact on fetal development. Likewise, if children are using it, they are more susceptible to the harmful effects of mercury. While it should be avoided across the board those, those two populations should be very careful," Spaeth said.

A person using the cream might not end up in an emergency room due to acute mercury poisoning, but it may be affecting them, he said.

"This is more subtle and someone may not perceive they've been exposed to mercury but that doesn't mean it's not exerting some harm to you or a fetus. It can be insidious because it hasn't announced itself," said Spaeth.

If you have any of symptoms and believe they may be linked to the skin creams, call your doctor, or call the Poison Control System hotline at (800) 222-1222.

Consumers who observe these products being sold are encouraged to call CDPH's toll-free Food and Drug Branch complaint hotline at (800) 495-3232.

"It's not something anybody should be using and exposing themselves to," Spaeth said.