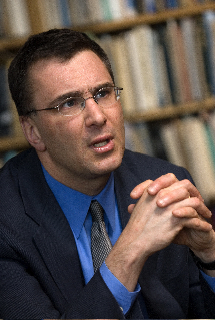 If you want to know whether the current health care reform
proposals can really improve care and cut costs, check out the state that's
taking the plan for a test drive. Granted, there are differences between the
three-year-old Massachusetts plan and the bills now in Congress, but as one of
the architects of the Bay State's legislation, MIT economist Jonathan
Gruber is in a prime position to evaluate the national plan's
chances. We're not the only ones who think so. During the 2008
election, Gruber advised all three major Democratic candidates on health care.
He currently consults for the administration and members of Congress seeking
insight into reform's ultimate costs and benefits.

Since Massachusetts passed its reform, the share of
residents without health coverage has fallen to 2.6
percent from roughly 10 percent pre-reform. Like the major national
bills, Massachusetts law requires nearly all residents to have insurance and
provides subsidies to residents who can’t afford to buy it. If your
employer doesn’t offer coverage, you can sign up for approved
fall-back plans, and you can’t be turned down for coverage because of
a pre-existing health issue. In what may be an alarming omen, though,
Massachusetts’s program has struggled to cover costs.

MoneyWatch.com contributor Michelle Andrews caught up with
Gruber, just as Congress headed home to take up the health care debate with
their constituents.

Was it a mistake not to address costs from the beginning in Massachusetts?

The goal was to provide universal coverage, and the truth
is that we’ve done so within the budget we set ourselves. The program
was never intended to bend the health care cost curve. That’s the
next stage. I don’t think we would have gotten this law passed if we’d
tried to do it all at once.


Would you say the same about national reform?

The big question at the federal level is, to what extent
do you want to hold broader coverage hostage to lower costs?

There are three possible courses of action: a bill
primarily about coverage, a bill with cost control, or nothing. If you pass a
bill that emphasizes coverage, it will cover 40 million people and will start
us down the path to cost control. If you’re not willing to take that
leap of faith, there’s a good chance you’ll just get
nothing. That’s the trade-off. Should the president sign a bill that
doesn’t fundamentally control costs in the long run? I think he
should. Others would disagree.

How does passing a bill that emphasizes coverage start us down the path to
cost control? Doesn’t it just increase usage and costs by a huge
amount?

There are two important points to make here.First,
cost control can’t really work without universal coverage, since the
uninsured represent a leakage in the system.For example, many of the
ideas on cost control work through the insurance incentives—
those can’t work on the uninsured. Second, broadening coverage takes
that issue off the table, politically speaking, and moves all the focus toward
cost control.We’ve seen that happen in Massachusetts.

Wouldn’t it actually be harder to get a bill passed without cost controls?

In broad terms, the bill would be more appealing with cost controls, so there is something in there for everyone.On the other
hand, cost controls may imply limiting the income of providers, which could create
new opposition to a bill.

How appropriate is it to use Massachusetts as a model for national health
reform?

The difference is, it’s just cheaper to do here.
We had a low rate of uninsurance, and we were already spending a lot to cover
the uninsured. But as John McDonough of Health Care for All said, the national
process is just like the Massachusetts process, only with three more zeros. Massachusetts
is proof that the model can work.

Really? Massachusetts residents report increasing problems finding doctors
who will see them and getting timely appointments.

There was a doctor shortage in Massachusetts even before
health care reform. It may have gotten somewhat worse now, although the
evidence is still limited. We have a crisis in primary care in this country in
that we don’t have enough doctors; adding 46 million people is only
going to make that problem worse.

One criticism of the national proposals is that they must do more to
discourage unnecessary services and promote quality. Could the Massachusetts
approach be a solution at the national level?

Not only could it be, it has to be the solution. If
we’re going to remain in a private system, a system that reimburses
providers based on volume of services has to change. Fundamentally that means bundling
reimbursements for all providers into a single payment for a given ailment to
discourage unnecessary tests and other procedures, and reimbursing providers
based on the quality of care delivered. Massachusetts passed cost control
legislation in 2008 that set up a commission to review the state’s
payment methodology, and the commission’s report calls for a move to
this type of reimbursement strategy.

A recent report found that patients
in Massachusetts could be hit with huge out-of-pocket costs for relatively
common medical problems. Wasn’t health reform supposed to prevent
this?

They found some very extreme examples. They did a useful
service, though, because the report pointed out in extreme cases that there are
holes in the law. We set an out-of-pocket maximum patient contribution of
$5,000, but did not include drugs in that. The researchers picked an example
that could rack up tens of thousands in drug costs. We’re working to
fix that.

What are the strengths of the reform proposals that have emerged to date?

The House and Senate HELP [Health, Education, Labor &
Pensions] bills are pretty good. In Massachusetts, probably the single biggest
flaw has been that we didn’t subsidize people above three times the
poverty line. So we had to exempt about 75,000 people from the mandate to buy
insurance. In Congress, by contrast, the reform proposals go up to four times
poverty. That’s good. The proposals feature exchanges to buy
insurance, which are good, and a mandate, which is effective.

What do you think the chances are that we’ll see comprehensive
health reform in the U.S. this year?

Fifty-fifty. You’ve still got some Republicans
in the room discussing it, and the president is very engaged. It’s
far from over.