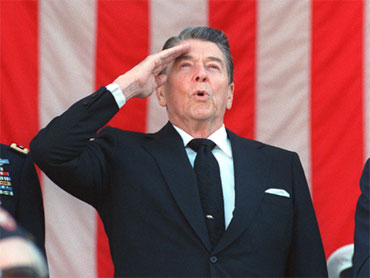 NEW YORK - Those who idolize the 40th President of the United States - and those with barely contained antipathy for him - will be fascinated by the wealth of material in the new HBO documentary "Reagan." But be warned: Anyone prone to paint Ronald Reagan and his legacy with broad brushstrokes will be dumbfounded.

If anything, the documentary (which was screened at the Sundance Film Festival and debuts on HBO Monday, Feb. 7) proves that one of the most influential political figures of the 20th century continues to confound easy description. This is especially timely given the beatification with which conservatives invoke his name in the service of promoting their agenda.

Conservative pundits and politicos hold up Reagan as a tax cutter (he actually RAISED taxes six of his eight years in office) who preached smaller government (the size of the federal government actually ballooned during his tenure) and fiscal responsibility (the U.S. debt TRIPLED under his watch).

Liberals lambaste Reagan as a hawk (he engaged with the Russians in arms reduction talks), a reactionary (he granted immunity to 2.2 million illegal immigrants) and a simple-minded tool of advisors who pulled his strings (he knew exactly what happened during the Iran-Contra affair).

But the most intriguing aspect of Eugene Jarecki's documentary - which features much rare footage from throughout Reagan's career - is how it rewrites the trajectory that set a young lifeguard in Illinois off to the White House.

For many, the Cliff Notes version of Reagan's career is that he was an actor who transferred his craft honed on the soundstages of Hollywood onto the political stage. But as we see in "Reagan," it was his work as a spokesman for General Electric in the 1950s and early 1960s that really prepared him for public office.

Reagan worked as a TV spokesperson for GE, selling the benefits of "better living electrically," and touring GE plants and offices across the country, to meet and speak with employees in order to sell the company. While on his speaking tours, he preached politics - corporate to a degree, anti-union and anti-Communist.

In effect, he was engaged in out-of-town tryouts before taking his act to Broadway.

And what he was selling was a brand of corporate conservatism, at a time when the United States was being increasingly torn by '60s rebelliousness. To many in his audience, the good-looking star with the tough-talking, homespun demeanor was exactly the tonic they sought when the country was in upheaval.

"That's one of the major contradictions and the most poignant contradiction of Reagan," said Jarecki, whose previous films include "Why We Fight" (2005) and "The Trials of Henry Kissinger" (2002), and a segment of last year's anthology "Freakonomics."

"He's out on the road across America campaigning to workers on behalf of General Electric, to woo workers away from trade unionism and into the bosom of the corporation. He's saying to them, 'Don't give this company a hard time with your union organizing and that troublemaking; trust the company and it will take care of you.'

"That's a very strange message coming from a former union president and New Deal enthusiast who loved FDR and was himself a liberal Democrat. And yet, in a very short time, because GE asks him to, Reagan gives those Readers Digest Americans advice that was against their interests.

"What you see in its baby shoes is what you see more and more over the course of his life, which is a strange and very poignant disconnect, where Reagan (who I don't believe wanted to do ill to anyone) comes to believe in and makes himself useful to a pro-corporate ideology in this country that works to undermine the very people he most indentifies with and the very people he came from."

More on Ronald Reagan:
Reagan: The "60 Minutes" Interviews, 1975-1989
What Reagan Would Think of His 100th Birthday
Reagan and the Debate Over Alzheimer's Onset
Ronald Reagan's Presidency: A Polling Retrospective
President Reagan's Legacy (Video)

The film's even-handed portrait of Reagan acknowledges the man's popularity and political skill as well as his flaws and the failures of his policies, even as his most ardent admirers do not.

Jarecki interviewed many who knew Reagan professionally, but even the man's closest compatriots agreed that he was not one to open up. One of the paradoxes of Ronald Reagan was that, as personable and friendly as he presented himself to the world (he could not fire people face-to-face), he was inward and remote even to those closest to him.

Jarecki also interviewed two of Reagan's sons: Michael Reagan, a devout conservative, who avidly promotes his father and his legacy to conservative causes; and Ron Reagan, a devout liberal, who describes his father as a complicated man who had difficulty relating to issues unless he could put a face to them. As an example he describes the years in which Reagan refused to utter publicly the word "AIDS" while millions suffered, until a fellow Hollywood actor and friend, Rock Hudson, succumbed.

Jarecki says pretending Reagan was a straight-arrow model for ethical rigidity, loyalty and honor is incorrect: "What is there is a complicated, contradictory man who is able to move us and touch us with gracefulness and communication and beauty, but at the same time is able to have blind spots where all of those great qualities can be used to an effect I think far more ill than he might have contemplated."

He also sees the dangers inherent in Reagan being used as a branding device for politicians and ideological movements.

"Reaganism as a political movement has enormous resources behind it," said Jarecki, "and it seeks - through stagecraft and through a tremendous level of effort toward propaganda - to present an image of Reagan that is so much larger-than-life that it sort of blinds us all, and keeps us all in a warm, happy, nostalgic state, thinking of a man who can do no wrong. And then anything that his 'brand' is applied to must be great and good for America.

"If you want to impress upon the public that taxes should be cut for the wealthy, you need some way to make the public think that somehow that's going to help them. What they are trying to sell the public are privately held agendas of their own, which frankly I don't think would be popular with the public if expressed sincerely, in the naked light of day without the cloak of Reaganism to wrap it in," he said.

Jarecki believes such tactics are not only injurious to people's own interests, but damaging to Reagan as well.

"It does a great injustice to his legacy," he said. "To say that he teaches us that deficits don't matter, as Mr. Cheney did, is to lie to the American public. Ronald Reagan felt very great regret about the deficits to which he contributed on his watch. To say that Reagan teaches us that we should be against amnesty for illegal immigrants is to contradict what Reagan himself stood for - that he was in favor of amnesty. Reagan held up at a standard bearer that we should never raise taxes? He raised taxes eleven times while in office.

"It's a cowardly form of politically argumentation," Jarecki said of the tactic. "And it's deeply unfair to Reagan of course, but it's also dangerous to us, because there are real lessons to draw from Ronald Reagan's career. There are things he did well and things that he did badly, but you can't draw the right lessons if you're basing your lesson on illusion."

One of the most poignant interviews in the film is of a military officer who describes the honor he felt serving under Reagan, who happily voted for him, and cherished the pride he instilled in his country - and who today suggests that he might not have voted for him if he'd thought more about the issues.

Jarecki said, "Where I began, like a lot of Americans, is with an excessive tendency to look for a hero or a villain in the President of the United States, whoever he might be. This is a deeply problematic notion for anyone living in a democracy.

"The whole idea of a democracy is that we ourselves, the people, are supposed to make a path of our politics, and it is we who with our feet and our vote and our labors and our vigilance are supposed to shape our country. But isn't it amazing how much of the time, whether it's Ronald Reagan or Barack Obama or anyone else, how much our public discourse is dominated by evaluations of the Leader Figure."

Does "Reagan" have a lesson for our current president?

Jarecki says President Obama could learn from what Reagan did NOT do - show the people "tough love" when the nation was reeling, like an addict, from an economic, energy and moral crisis in the late 1970s and early '80s.

"He made them feel better, but I'm not sure it was the time we should have been made to feel better. It probably was the time we needed someone to say, 'Go to therapy, let's get this right because in the decades ahead you'll want to have gotten it right.'

"Obama faces a similar challenge," Jarecki said. "He has to learn to not encourage Americans to put their head in the sands."