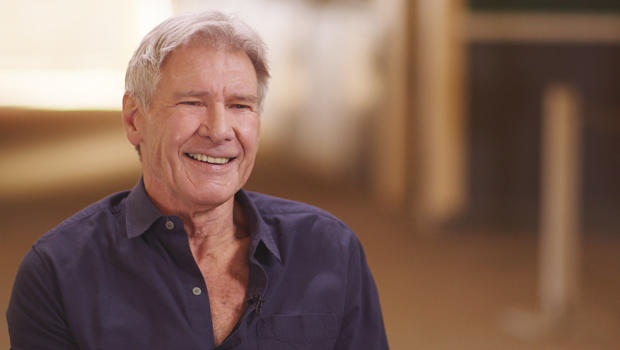 ... because your life is flashing before your eyes, one memorable movie moment after another.  It's not just that Ford embodied some of the most enduring characters ever put on film — Han Solo, Indiana Jones, Rick Deckard — and not just once, but a few times. It's that after more than 40 years of doing it, Ford remains unstoppable.

He just wants to keep making movies, whether he gets top billing or not. "Look, I've enjoyed every job I've ever had, because I love the work," Ford said. "But I don't have to be a leading man anymore!"

Cowan asked, "When you return to roles, whether it's Han Solo or Indiana Jones, what's the challenge for you in coming back to the same role years later?"

"Tryin' not to look silly, you know, running around in tight pants and high boots," Ford replied. "I'll give you a more appropriate answer, considering that I'm gonna start doing Indiana Jones in about two months. You know, [the reason] we have the opportunity to make another is because people have enjoyed them. I feel obliged to make sure that our efforts are as ambitious as they were when we started."

"Can you tell us anything about the new Indiana Jones?"

What we can tell us about is his latest role, in one of the best tales about Man's Best Friend ever written: Jack London's "The Call of the Wild."

The challenge for Ford was that his co-star, Buck, wasn't real; he's computer-generated. A former Cirque de Soleil performer, Terry Notary, was actually the dog's human stand-in. "He gave me someone to establish an emotional relationship with," said Ford.

"'Cause you have to have that, right? Can't just be staring at nothing?" asked Cowan.

"You have to have something to work off of. I mean, it's a little strange, I'm rollin' around on the floor with this guy, and scratching his tummy, and rubbing him behind the ear!"

"You physically were doing that with him? 'Cause you had to, I guess, right?"

"There was money involved!" Ford said.

Just like many of us, "The Call of the Wild" was required reading for Ford in high school. Jack London first published his naturalist work in 1903, and of all the lessons it offers, one in particular hit pretty close to home. "We're in danger of losing the support of nature for our lives, for our economies, for our societies," said Ford. "Because nature doesn't need people, [but] people need nature."

While he's quietly campaigned for a myriad of causes since the early 1990s, when the United States pulled out of the Paris Climate Accord, that brought him to the front line.

Cowan said, "You've spent a lotta time working with big business on trying to get their focus."

"Yes – businesses, NGOs, municipalities, state governments have all stepped into the gap," said Ford. "I'm now seeing that I think we're coming close to being able to really commit the resources and energy to confronting the issue, because it's taken up on the highest level of politics. It's taken up on the streets by young people."

"This is a bottom-line issue?" asked Cowan.

He often brings his passions into his films. While he may not be an archaeologist, Ford is a first-rate carpenter in real life, or at least he used to be. When asked if he still gets to work much as a carpenter anymore, he replied, "Every once in a while I sharpen my tools! I just don't find enough of a block of time to get back my chops."

"Your dad also had a shop, right?"

"My dad had a shop, but I was there when he cut the end of his finger off cutting a piece of plywood on a table saw," Ford said. "Maybe, maybe having seen that – look, hey, look," showing off all ten fingers. "Thanks, Dad!"

He likes process, whether it's building a cabinet, or flying airplanes. That's a hobby that got a lot of attention five years ago, after a mechanical problem in his vintage Ryan PT-22 forced Ford to make an emergency landing on a golf course, shattering his pelvis and his back, but injuring no one on the ground.

Is he still flying? "Oh yeah. Absolutely," he said. "I love to fly. I love being up in the air. I love the experience of the third dimension. We're living in two dimensions down here. You get up there and you see, it's spectacular."

It's easier to get away from prying eyes in the sky, too.  Ford is by no means a recluse, but he's a private man – pragmatic to the core.

Cowan said, "You're not a big fan of doing red carpets and interviews like this."

He also knows his celebrity pales in comparison to the size of the world's problems. But at 77, this somewhat-reluctant superstar hopes that he can at least get people talking to each other again.

Cowan asked, "You're a good Midwesterner; you don't really talk politics or religion much, but that's changed a wee bit?"

"I think it's come to the point where we gotta start talking politics," Ford said. "But we gotta talk about it in a positive way. We gotta regain the middle ground. We're in these ideological enclaves. But the truth is in the middle. Progress is made in the middle."

"And you think we can get back there somehow?" asked Cowan.

"She's Brown like me": Young girls react to Halle Bailey in "The Little Mermaid"

The Queen on screen: Actors discuss playing the most private of public persons