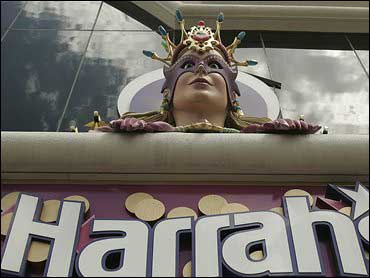 The board approved a $90 a share buyout offer from Apollo Management Group and Texas Pacific Group and recommended shareholder approval even as the company reserved the right to pursue even higher bids for about a month.

The buyers are also assuming $10.7 billion in debt in the deal.

It would be the largest going-private deal ever for a publicly held casino company and the seventh biggest leveraged buyout deal of any kind of company.

The $90 a share buyout offer was a 36 percent premium over Harrah's closing price on Sept. 29. That was the last trading day before the casino company announced Apollo Managment and Texas Pacific had offered $81 per share Oct. 2 to take the company private.

A special committee of Harrah's board, which excluded chief executive and chairman Gary Loveman, had been meeting in New York since last week after the company set a Tuesday deadline to receive offers.

Harrah's said the deal was expected to be completed in about a year, but said its special committee would continue to solicit third parties for a possible higher bid for the next 25 days.

"In Apollo and TPG, we will have owners who share our vision for Harrah's, are fully supportive of our current strategy and are committed to helping us execute on it," Loveman said in a statement. "This will be a change in ownership, not a change in direction."

Texas Pacific founding partner David Bonderman said he believed the private equity pairing would be able to "help Harrah's deliver on its growth strategy" with a long-term perspective.

The group made no immediate mention of large scale redevelopment plans in Las Vegas and Atlantic City, N.J., which Harrah's had previously said it would unveil by early next year.

Harrah's shares rose 12 cents to $82.30 Tuesday on the New York Stock Exchange before trading was halted for news of the deal which came after the markets closed.

The deal for Harrah's, excluding debt, ranks as the seventh largest leveraged buyout in history, according to Thomson Financial. The largest ever was RJR Nabisco Inc.'s $25 billion acquisition by Kohlberg Kravis Roberts & Co. in 1998.

Harrah's is the world's largest casino company by revenue, operating 39 casinos nationwide, including Caesars Palace, Bally's and Paris on the Las Vegas Strip, and Caesars and Harrah's in Atlantic City, N.J. It also has interests in Casino Windsor in Canada, to be renamed Caesars Windsor in early 2008, and Conrad Punta del Este in Uruguay.

By year's end, Harrah's is to acquire all the shares in U.K.-based London Clubs International PLC, which operates seven casinos in the U.K., two in Egypt, one in South Africa and is a consultant for a casino in Lebanon.

Harrah's also is pursuing projects in Singapore, the Bahamas, Spain and Slovenia.

How to prepare for Biden's student-loan relief application

Mortgage rates climb to their highest level in 16 years

More U.S. states are making employers say how much they pay
Thanks for reading CBS NEWS.
Create your free account or log in
for more features.
View CBS News In
CBS News App Open
Chrome Safari Continue
Be the first to know
Get browser notifications for breaking news, live events, and exclusive reporting.