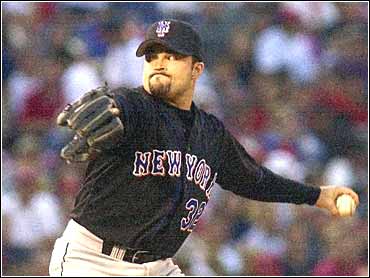 Mike Hampton is getting baseball's biggest contract. Now he has to avoid what has been routine for his Colorado Rockies' predecessors: one of its highest ERAs.

The most coveted left-hander on the free-agent market agreed to a $121 million, eight-year deal with the Rockies.

"They were the best by far," Hampton said. "Colorado is our kind of place."

Hampton, 28, went 15-10 for the New York Mets last season and was MVP of the NL championship series.

"We added a horse," Rockies general manager Dan O'Dowd said Saturday. "His leadership in the clubhouse will be very important for us in the next eight years."

He is the second prominent left-hander to sign with Colorado this week, following Denny Neagle, who agreed Monday to a $51.5 million, five-year deal.

Hampton has a 6.88 career ERA at Coors Field.

"It's a tough place to pitch," O'Dowd admitted. "We didn't come in there and sell Mike Hampton how it was pitcher's heaven."

"There's no doubt it's the toughest place to pitch," he said. "It's a test I look forward to and something that I think will make me a better pitcher in the long run."

The highest total contract in sports is Kevin Garnett's $126 million, six-year deal with the NBA's Minnesota Timberwolves, which averages $21 million. The highest average salary agreed to is $29.5 million, which will be earned by Shaquille O'Neal of the Los Angeles Lakers in an $88.5 million, three-year extension that starts with the 2003-04 season.

Hampton's contract, which includes a $20 million team option or 2009 with a $6 million buyout. is the longest for a pitcher since Wayne Garland signed a 10-year deal with Cleveland in 1977.

Hampton's average salary of $15,125,000 becomes the first- or second-highest among pitchers, depending on how Roger Clemens' $30.9 contract million extension with the New York Yankees is evaluated.

Clemens considers it a two-year deal averaging $15.45 million, while the Yankees consider it a three-year contract averaging $10.3 million.

Hampton's deal calls for a $20 million signing bonus, $1 million payable to charity and $19 million deferred without interest until after the contract expires. The remaining money will be paid in 10 yearly installments of $1.9 million, the money accruing 3 percent interest.

Because of the deferred money, Hampton's agent, Mark Rodgers, said its present-day value was about $85 million.

St. Louis had been the other finalist to sign Hampton, and Atlanta, Texas and the Chicago Cubs were interested.

"It didn't come down to the last dollar," Phillips said. "All the clubs were close enough. It came down to other issues, like the chance to win and quality of life for his family."

While Hampton's agent, Mark Rodgers, announced the total at $123.8 million, that figure included $2.8 million in interest that will accrue a decade from now. Neither the commissioner's office nor the players' association includes the interest as part of a contract's value.