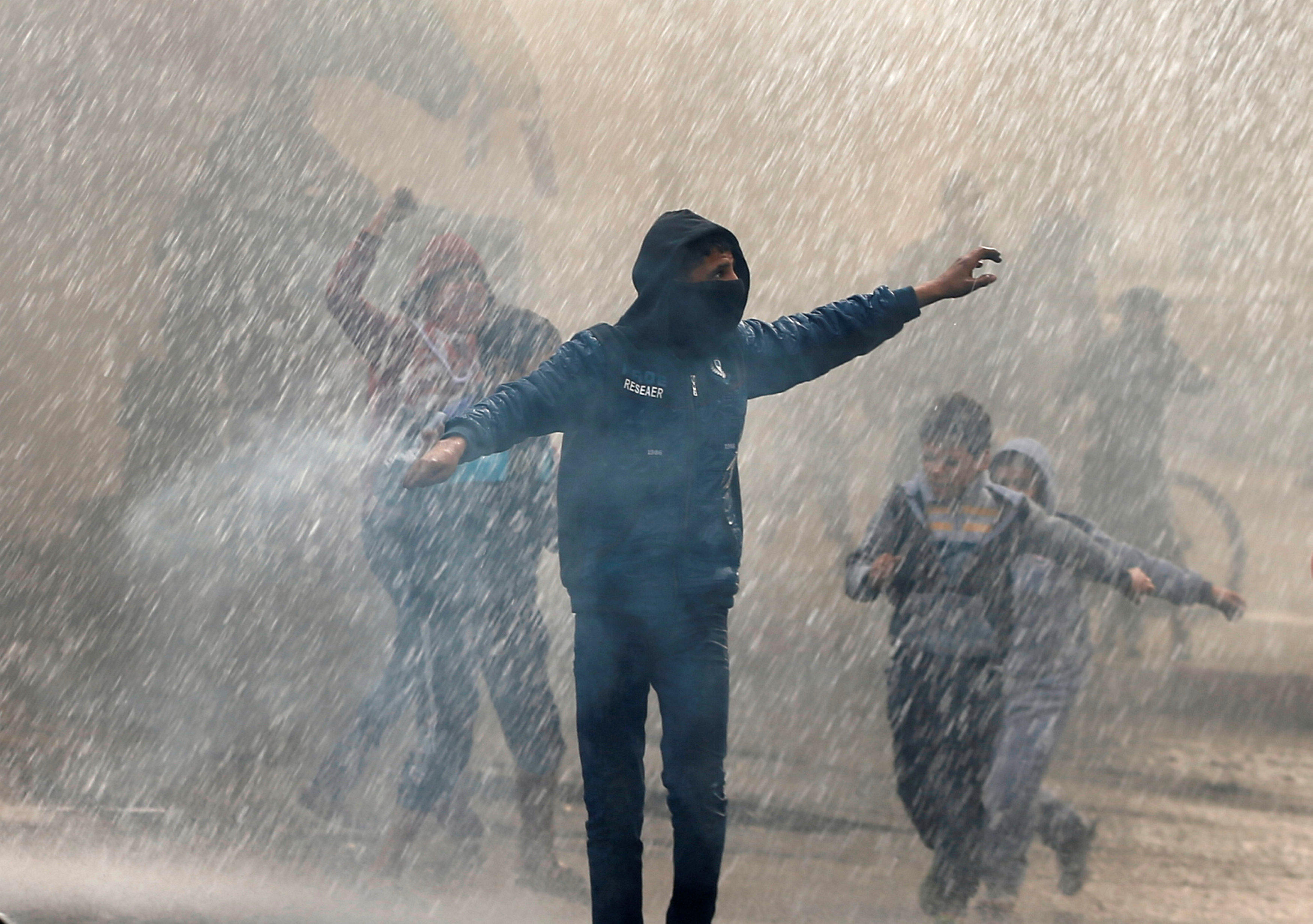 The leader of Islamic militant group Hamas on Thursday called for a new Palestinian uprising against the state of Israel in the wake of U.S. President Donald Trump's recognition of Jerusalem as the Israeli capital.

During a speech in Gaza, Ismail Haniyeh said, "We should call for and we should work on launching an intifada in the face of the Zionist enemy," the Reuters news agency reported.

"We want the uprising to last and continue to let Trump and the occupation regret this decision," Haniyeh also said.

Hamas killed hundreds of Israelis during an armed uprising in the early 2000s, but the group's ability to carry out attacks is more limited. Israel has imposed a blockade on the Gaza Strip, and many of Hamas' supporters in the West Bank have been arrested.

Even so, Hamas possesses a large arsenal of rockets in Gaza capable of striking many areas in Israel.

Meanwhile, clashes between hundreds of Palestinian protesters and Israeli troops erupted across the West Bank on Thursday while demonstrators in Gaza burned posters of President Donald Trump and Israeli Prime Minister Benjamin Netanyahu, as well as Israeli and U.S. flags.

In the West Bank, crowds of protesters set tires on fire and hurled stones at anti-riot troops. In the biblical town of Bethlehem, troops fired water cannons and tear gas to disperse a crowd, in clashes that could cloud the upcoming Christmas celebrations in the town of Jesus' birth. Projectiles were hurled through the air as protesters shot rocks with slingshots, CBS News correspondent Seth Doane reports. In Ramallah, the seat of the Palestinian government, protesters set tires on fire, sending a thick plume of black smoke over the city.

Iraq's government on Thursday decried the Trump administration's decision, calling it "unjust" and urging the United States to revoke it. Iraqi Prime Minister Haider al-Abadi warned in a statement of "dangerous consequences" for the region's stability and the world, as hundreds of Iraqis gathered in Baghdad to protest.

Iraq is a key U.S. ally in the region, with more than 5,000 American troops remaining in Iraq, according to Pentagon. With the backing of the U.S.-led coalition, Iraqi forces have retaken nearly all territory held by the Islamic State of Iraq and Syria (ISIS) group since 2014.

French President Emmanuel Macron also voiced his disapproval on Thursday, calling the move a "unilateral decision." He said the status of Jerusalem should be part of an international decision between Israel and the Palestinians.

U.S. Secretary of State Rex Tillerson responded to criticism by saying that the President was merely recognizing reality. Tillerson defended Mr. Trump's move on the sidelines of an Organization for Security and Cooperation in Europe conference in Vienna, where Foreign ministers from the OSCE nations were roundly condemning the decision.

Tillerson said the United States would still support a two-state solution to the Israeli-Palestinian conflict "if that's the desire of the two parties." He said Jerusalem's final status is still for Israelis and Palestinians to workout, and that "the whole world" wants a peace process, and the U.S. still believes there's an opportunity.

Mr. Trump's dramatic break Wednesday with decades of U.S. policy on Jerusalem counters long-standing international assurances to the Palestinians that the fate of the city will be determined in negotiations. The Palestinians seek Israeli-annexed east Jerusalem, captured by Israel in 1967, as a future capital.

Saudi Arabia's royal court, led by King Salman and his powerful son, condemned the Trump administration's decision in a rare public rebuke by the U.S. ally.

Saudi Arabia, a regional powerhouse that could help the White House push through a Middle East settlement, said Thursday the kingdom had already warned against this step and "continues to express its deep regret at the U.S. administration's decision," describing it "unjustified and irresponsible."

Additional NYPD vans, officers with K9s, and other NYPD officers were visible and more in force than usual on First Avenue, outside the U.S. Mission, office of U.S. Ambassador Nikki Haley, opposite the U.N. Headquarters, Falk reports.

In recognizing Jerusalem as Israel's capital, Mr. Trump was seen as siding with Israel's hard-line government which says it will not give up any part of the city.

Palestinian President Mahmoud Abbas has suggested that the United States disqualified itself as mediator between Israelis and Palestinians, a role it has played exclusively in more than two decades of stop-and-go negotiations on setting up a Palestinian state alongside Israel.

The talks, stalled in recent years, have failed to bring the Palestinians closer to the state the seek in the West Bank, Gaza Strip and east Jerusalem, lands Israel captured in the 1967 Mideast war. In parallel, Israel has steadily expanded Jewish settlements on war-won lands, even as it said it wants to negotiate a deal.

Mr. Trump's claim Wednesday that he still wants to pursue what he has called the "ultimate" Mideast deal was met by mounting skepticism.

"With its decision, the U.S. has isolated itself and Israel, and has pushed the area into a dangerous situation and stopped the peace process," said Nabil Abu Rdeneh, a senior Abbas aid. "Without a doubt, this decision will not help at all in solving the problems in the area, but rather strengthen the extremists."

Abbas has not said what steps he would take, if any. Later Thursday, he is to meet with his closest Arab ally, Jordan's King Abdullah II, to coordinate positions.

Jordan plays a central role in the mounting controversy and, alongside other U.S. allies in the region, has slammed Trump's decision on Jerusalem.

The king is seen as one of Washington's most dependable partners in the battle against Islamic extremism in the region.

At the same time, the legitimacy of his Hashemite dynasty is closely linked to its special role in Jerusalem, as religious guardian of a key Muslim shrine in east Jerusalem. Jordan, which has a large population with Palestinian roots, cannot afford to be seen as soft on Muslim claims to the holy city.

The consultations between the monarch and Abbas will kick off a series of meetings in the Arab and Muslim world on how to respond to Trump.

The Arab League, a group representing most states in the Middle East and North Africa, will meet Saturday. Next week, Turkey will host a gathering of the Organization of Islamic Cooperation, which has 57 Arab and Muslim member states.

The region has been bracing for fallout from Mr. Trump's seismic policy shift.

Turkish President Recep Tayyip Erdogan on Thursday accused Mr. Trump of throwing the Middle East into a "ring of fire" and said his motives were difficult to fathom. "It's not possible to understand what you are trying to get out of it, Erdogan said, referring to Mr. Trump in a speech to a group of workers at Ankara's airport.

"Political leaders exist not to stir things up, but to make peace," Erdogan said. "If Trump says 'I am strong therefore I am right,' he is mistaken."

Defying dire, worldwide warnings, Mr. Trump insisted that after repeated peace failures it was past time for a new approach, starting with what he said was his decision merely based on reality to recognize Jerusalem as the seat of Israel's government. He also said the U.S. would move its embassy from Tel Aviv to Jerusalem, though he set no timetable.