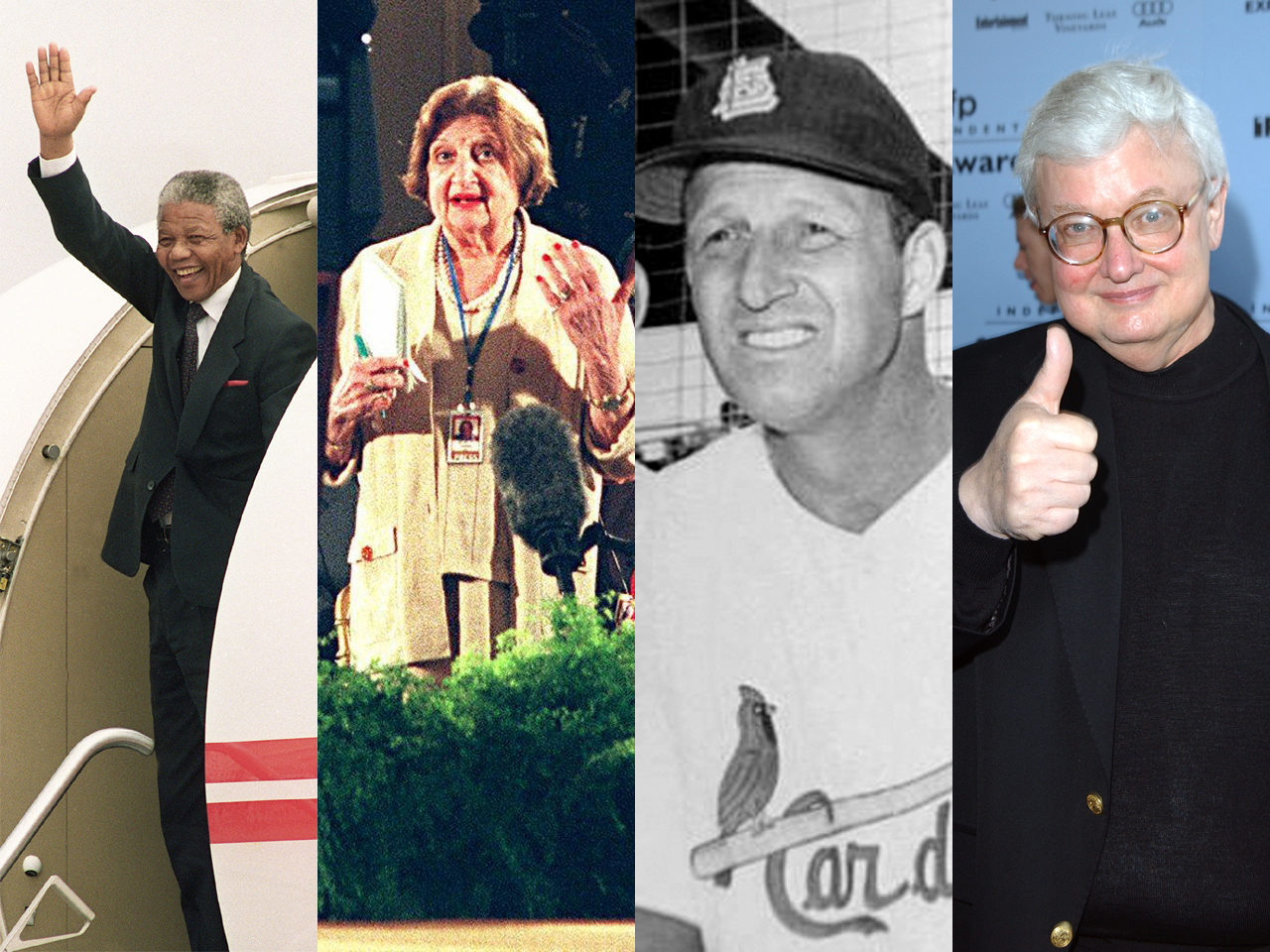 They led us and inspired us. They were singers and actors, writers and poets. They gave us advice and inventions, and so many memorable moments. So Charles Osgood says hail and farewell to those who left us in 2013, for auld lang syne.

Nelson Mandela walked out of prison after 27 years with his head held high and his mind fixed, not on revenge, but on the more difficult task of reconciliation.

"The time for the healing of the wounds has come," he said.

Thank you, Nelson Mandela, for showing us that -- in the right hands -- courage, grace and forgiveness are more powerful than any weapon.

And thank you, Van Cliburn. With your two hands, you struck a chord of camaraderie in Moscow in 1958, warming Soviet and American hearts with your music.

Chinese ping pong champion Zhuang Zedong reached out a hand of friendship to American Glenn Cowan in Japan in 1971, and got a gift in return: A T-shirt with an American flag, a peace symbol, and the words, "Let It Be."

Their gestures opened a door between our two countries that had been closed for decades.

As a Rose Garden ceremony with the Chinese team, President Nixon said, "Friendship between our two great peoples will mean a better chance for peace for all the world."

Thank you, Zhuang Zedong, for your ping pong diplomacy.

Goodbye to David Frost, whose interviews often made headlines . . . none more famously than his interview with former President Nixon, who offered his first and only apology over Watergate:

Frost: "I think, unless you say it, you're going to be haunted for the rest of your life."
Nixon: "I let the American people down, and I have to carry that burden with me for the rest of my life."

British Prime Minister Margaret Thatcher left office with NO regrets: "It is because we on this side have never flinched from difficult decisions that this House and this country can have confidence in this government today," she said.

Goodbye to you, Iron Lady.

And to you, Murial Siebert; as the first woman to hold a seat on the New York Stock Exchange, you opened doors for women on Wall Street. "If the doors didn't open, I just reared back and pushed 'em open," she said.

Helen Thomas pushed open the door to the White House Press Room at the start of the Kennedy era, and stayed there -- front and center -- asking the tough questions of 10 administrations.

And you, Ed Koch. You asked the same question for three terms as New York's pugnacious mayor ("How 'm I doin'?"), and weren't afraid of the answers.

"There are very few people in public office who would invite someone to say, 'You're doing terrible!'" he laughed.

Al Neuharth thought our newspapers should be more colorful, and that news stories should be simpler and more bite-sized. He gave us USA Today.

Annette Funicello was irresistibly sweet as a Mousketeer -- and later, when she lost the mouse ears, donned a bikini, and headed to the beach.

Even when MS made walking difficult, Annette Funicello kept her winning smile, showing us all how to move through life with courage and grace.

Esther Williams plunged into life with daring, grace and style -- swimming her way to fame with a smile no amount of water could wash away.

So many varied gifts they gave us:

Ray Dolby helped invent the world's first videotape recorder; THEN he went on to revolutionize SOUND. Chances are, you're hearing me better right now thanks to Ray Dolby.

Amar Bose put his name on some of the world's finest speakers and earphones. Our thanks to him.

And Doug Englebart gave us the computer mouse, opening up a universe of information with just a click.

Passage: The inventor of the computer mouse

Jean Stapleton was a fine actress in the movies and on stage.

But we will remember her most fondly as Edith Bunker, Archie's loving and long-suffering wife, on "All in the Family."

Archie: "The only thing anybody could ever pin on you, and as far as I know, it ain't no crime, is bein' a dingbat."
Edith: "Oh, thank you, Archie!"

She made us laugh, with her big heart and earnest struggles.

Priest: "Did you ever wish you were somebody else?"
Edith: "No, but when I was a little girl, I used to pretend to be somebody else . . . Deanna Durbin!"

Deanna Durbin was the girl many little girls dreamed of being in the 1930s . . . smart and spunky, with a voice like an angel.

Durbin charmed America through those dark Depression days, then walked away from the spotlight and died quietly this year, at 91.

Patty Andrews and her sisters lifted our spirits during World War II. If there is a canteen in heaven, the Andrews Sisters are together there now, teaching the angels to swing.

Good bye to Patti Page, who waltzed us through the Fifties with her sweet, silky voice.

And to Eydie Gorme, whose sophisticated style put us over the moon.

Scott Carpenter never made it to the moon, but he DID bring us closer, riding a rocket into orbit in 1962. He had the right stuff.

Yvonne Brill was a rocket scientist who managed to raise a family AND invent a propulsion system to keep satellites in orbit in her spare time.

Ruth Benerito gave us permanent press fabrics. She saved us countless hours of ironing . . . time we could spend on the Etch-A-Sketch, thanks to Andre Cassagnes. Hats off to them.

And hats off to Kenneth Battelle, known to everyone as Mr. Kenneth. He was a genius of hair.

In baseball, Stan Musial was Stan the Man, one of the greatest hitters of all time, and a true gentleman. Hats off to him.

And to Deacon Jones, football's Secretary of Defense.

And to the Baltimore Orioles' manager Earl Weaver, whose record for ejections from ball games will probably never be beaten.

"On my tombstone, just write, 'The Sorest Loser Who Ever Lived,'" was what Earl Weaver had to say about that.

Dr. Robert Edwards created a sensation in 1978 when Louise Brown, the first test-tube baby, was born. Millions of people now have a chance to raise a family, thanks to Robert Edwards.

Virginia Johnson created a sensation of her own in 1966 when she and her partner, Dr. William Masters, published their scientific study of sex.

She said, "Our work will contribute to a change in the attitude to our sexuality to the extent that it will be more practical and wholesome."

Dr. Joyce Brothers made house calls in our living rooms, as the first television psychologist.

Pauline Phillips shot off sage and snappy answers for nearly half a century. Thanks for the advice, "Dear Abby."

And thank you, Surgeon General C. Everett Koop, for your good advice about the dangers of smoking cigarettes: "If I had my way, I would say it is just as addictive as heroin or cocaine."

Cory Montieth, you sang your songs for far too short a time. As Finn Hudson on "Glee," you inspired teenagers to find their own voices -- then broke their hearts when you succumbed to your own darker angels.

"I will not be a common man," Peter O'Toole wrote in his journal at age 18, "I will stir the smooth sands of monotony."

And did he ever! Dashing across the Arabian desert, playing warriors, kings, and swashbuckling leading men ("I'm not an actor, I'm a movie star!"), characters that will live forever.

Seamus Heaney died this year. He was a great poet from a country of poets, Ireland. He wrote this, a poem called "Digging":

Between my finger and my thumb
The squat pen rests; snug as a gun.
Under my window, a clean rasping sound
When the spade sinks into gravelly ground:
My father, digging.

When Doris Lessing won that coveted prize 12 years later, she greeted the news in her own unconventional manner.

Doris Lessing defied convention all her long life, a life she chronicled with visionary zeal and a skeptic's honesty. "The Golden Notebook" is considered a feminist Bible, although she never considered herself a feminist, or any other kind of "-ist." She was one of kind.

Richie Havens, YOU were one of a kind. You gave a new generation an anthem at Woodstock in 1969.

Good bye to Karen Black, a uniquely talented actor . . . and YOU, Eileen Brennan . . . and YOU, Milo O'Shea, with your bushy eyebrows and Irish charm.

Farewell to the many fine actors who died this year, whose talent, humor and grace will live on: Richard Griffiths, Eleanor Parker, Lisa Kelly.

Our love to Julie Harris, who rode the Ferris Wheel with James Dean . . .  to Joan Fonataine . . . and a sad farewell to Paul Walker, who raced to superstardom in six "Fast and Furious" movies. When Walker's life came to a tragic end in a fast car this year, it was all too real.

Rodolfo Hernandez was awarded the Congressional Medal of Honor in 1952, for valor under fire in Korea, then devoted the rest of his life to helping his fellow veterans. A salute to him.

And to all the brave men and women who gave their lives for their country this year, thank you.

Tom Clancy's military thrillers extolled the virtues of those who serve, in stories so real some suspected he stole government secrets.

"I made up stuff that turned out to be true, " he said. "That's the spooky part."

And thumbs up to Bonnie Franklin, who won our hearts as a single mom on "One Day at a Time."

She was part of our TV family . . .  and so was Conrad Bain, the doting dad on "Diff'rent Strokes."

And Frank Bank, who played Wally Cleaver's friend on "Leave It to Beaver."

Marcia Wallace, you made us laugh as Bob Newhart's receptionist, and then tickled the funny bones of a whole new generation on "The Simpsons." She was a funny lady.

Jonathan Winters was a VERY funny man . . . he left us laughing this year.

Marcia Wallace, of "Bob Newhart" and "The Simpsons," dies at 70
Passage: Jonathan Winters

"Bad guys are the fun guys," Elmore Leonard wrote. He was a master of crime.

One of those bad guys was Ray "Bones" Barboni, played by Dennis Farina, a real-life cop who played both sides of the law in the movies and on TV. We will miss him.

And we will miss you, James Gandolfini. You were VERY good indeed, winning our hearts as the unlikely hero Tony Soprano, a mob boss with a questioning soul and a shrink. You were part of OUR family.

Tony Soprano: "Someday soon, you're gonna have families of your own, and if you're lucky, you'll remember the little moments, like this, that were good. Cheers."

What an amazing company of men and women left us this year, who gave of their hearts, and their souls, and their hands -- such as prima ballerina Maria Tallchief; James de Priest, one of the first African- American conductors on the world stage; record producer Phil Ramone; country music singer and songwriter George Jones; athlete and sportscaster Pat Summerall; math wizard Shakumtala Davi, known as "the  human computer."

We will miss them all, and be grateful for the times we had together that were good.