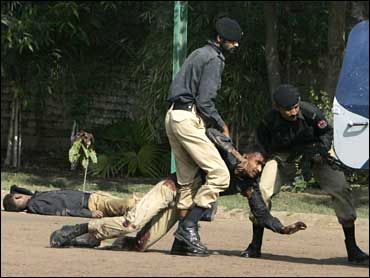 A group of gunmen attacked a police academy and rampaged through it for hours on Monday, throwing grenades, seizing hostages and killing at least eight police and three civilians, before being overpowered by Pakistani security forces in armored vehicles and helicopters, authorities said.

Six militants were arrested and eight others died in the eight-hour battle to retake the facility on the outskirts of this city in eastern Pakistan, said a top government official in Punjab province.

Of the eight dead, two blew themselves up, he said.

Television footage showed members of the army and police celebrating as the siege came to an end.

Officials said more than 90 officers were wounded by the attackers, some of whom wore police uniforms.

Reports on the death tolls from the assault have varied wildly, with officials confirming at least 11 to The Associated Press. Other reports gave higher numbers of dead. Two senior Pakistani intelligence officials in Lahore told CBS News' Farhan Bokhari that between 15 and 22 people were thought to have been killed by the attackers, with at least 90 more wounded.

The death toll was expected to rise because some of the bodies were inside the compound.

The attack came less than a month after an ambush on Sri Lanka's visiting cricket team in the heart of Lahore and underscored the threat that militancy poses to the nuclear-armed country.

It prompted the country's top civilian security official to say that militant groups were "destabilizing the country."

Interior Ministry chief Rehman Malik, who visited the police academy after the siege, described it as an "attack on Pakistan."

"There are two choices: to either let the Taliban take over your country or to fight it out. At this time the nation must unite," he said.

The country's information minister Qamar Zaman Kaira congratulated Pakistan's forces who participated in the battle with the militants, saying "they conducted it very successfully."

Monday's attack on the Manawan Police Training School occurred as dozens of police officers carried out morning drills. As many as 850 police and trainees were believed to have been in the center when the attack began, Hashami told CBS News. Many of them escaped as the siege unfolded.

Soldiers and other security forces surrounded the compound on the outskirts of the city, exchanging fire in televised scenes reminiscent of last November's militant siege of the Indian city of Mumbai.

Television footage showed several frightened police officers jumping over the wall of the academy to flee the attack.

Some crouched behind the wall of the compound, their rifles pointed in the direction of the parade ground where police said the attack took place.

Farther back, masses of security forces and civilians monitored the tense standoff, taking shelter behind security and rescue vehicles.

Security forces including the army battled the gunmen for around eight hours.

They managed to corner several on the top floor of a building on the compound, where the gunmen were holding some 35 hostages, said a top government official in Punjab province, of which Lahore is capital.

Police captured one of the suspected gunmen six hours after the initial assault, dragging the scruffy, bearded man to a field outside the academy and kicking him.

As the siege ended, black-clad Pakistani commandos fired their guns in the air in celebration at the top of the building, shouting "God is Great!" and "Long live Punjab police!"


No Militants Claim Responsibility For Attack

It was not immediately clear what group might be behind Monday's attack, but the earlier assault on the Sri Lankan team - featuring heavily armed, backpack-toting gunmen besieging a populated area - bore similarities to last year's siege of the Indian city of Mumbai.

India has blamed the Pakistani militant group Lashkar-e-Taiba (LeT) for that assault, and Pakistan has taken several of the outfit's alleged leaders into custody. Lashkar-e-Taiba, which is largely based in eastern Punjab province, has denied involvement in either Mumbai or the cricket team attack.

One of the intelligence officials told who spoke to Bokhari said Monday's attack was likely orchestrated by the LeT.

"It is still early to be sure, but initial information suggests that Lashkar-e-Taiba was involved," said the official, who spoke to CBS News on condition of anonymity.

The attack underscored the growing threat of militancy to nuclear-armed Pakistan, which is under U.S. pressure to battle al Qaeda and Taliban militants on its soil.

President host Bob Schieffer on Sunday that America needs, "to refocus attention on al Qaeda. We are going to root out their networks, their bases. We are gonna make sure that they cannot attack U.S. citizens, U.S. soil, U.S. interests, and our allies' interests around the world."

Mr. Obama told Schieffer his administration's new plan for tackling militants in Pakistan and Afghanistan, "does not change the recognition of Pakistan as a sovereign government. We need to work with them and through them to deal with al Qaeda. But we have to hold them much more accountable."

Most of the militant violence has occurred along Pakistan's northwest border with Afghanistan, where a suicide bomber blew himself up Monday at a police headquarters, killing at least eight people.

But Pakistan's eastern front has not escaped, with Lahore witnessing some brazen assaults.

In early March, a group of gunmen ambushed the visiting cricket team in a crowded city traffic circle, sparking a battle that left six police officers and a driver dead and wounded several of the players.