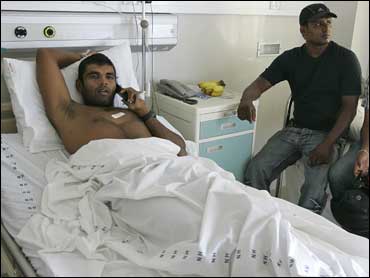 The bloody ambush of the Sri Lankan cricket team shows that security in Pakistan has "collapsed" under the country's shaky pro-Western government, an opposition leader said Thursday, as police questioned several people detained in the hunt for the terrorists.

The country's cricket chief, meanwhile, dismissed as "totally fabricated" claims by British referee Chris Broad that police abandoned him and other officials during Tuesday's attack.

"It's unfortunate that a gentleman of such a stature is saying such a thing," said Ijaz Butt, who promised to lodge a protest with the International Cricket Council over Broad's comments. "There is not a single bit of truth in his statements," he said, adding that a police commando was wounded in the neck protecting Broad during the attack.

Broad was not alone in his criticism, however. Other British and Australian cricket officials spoke out Thursday about the sense of abandonment they felt during the incident as they looked around and reportedly saw no law enforcement officials.

Six police officers and a driver were killed and seven players, an umpire and an assistant coach were hurt in the ambush in Lahore, which occurred despite government pledges to give the Sri Lankan players and match officials the same level of protection afforded a head of state in the country wracked by a virulent militancy.

"The security system in Pakistan under this regime has collapsed because this government is too busy doing other things, they are too busy in their quest for power," Mushahid Hussain, an opposition leader told a televised media conference. "They should be held responsible."

Days before the attack, Pakistan's government dismissed the opposition-led local administration in Lahore as part of a bitter political dispute. Several people have alleged that chaos resulting from that decision could have been a factor in the security lapses.

Lahore commissioner Khusro Pervez said the gunmen should have been battled by "back-up police support which didn't arrive."

"All convoys are provided outer cordons, but in this case the outer cordon did not respond or it was not enough. The vehicles used for escorting the Sri Lankan convoy were not adequate," the Dawn newspaper quoted him as saying to a television news show owned by the same media company.

"There are certain security lapses, which are very vivid and very clear," he said.

Salahuddin Niazi, the police official heading the investigation team, said several people were being questioned in the attack.

"We got some strong clues and leads, and several suspects are in our custody and raids are currently under way to capture more people on information gleaned from some of the detainees," he said, giving no more details. None of the attackers is believed to be in custody.

A senior Pakistani police official told CBS News' Farhan Bokhari on Thursday that as many as 20 suspects were being questioned, but it wasn't clear whether any of them would eventually be charged in connection with Tuesday's attack.

The official, who spoke to CBS News on the condition of anonymity from Lahore, said the suspects were detained, "on the basis of preliminary information."

Islamic militants are widely suspected, but authorities have not explicitly said that.

Pakistan has a web of extremist networks, some with links to al Qaeda and the Taliban, that have attacked foreign civilians in a bid to destabilize the government and punish it for supporting the U.S.-led invasion of Afghanistan.

The law enforcement official told Bokhari that most of the suspects being questioned were linked to Lashkar-e-Taiba (LeT), the Islamic militant group linked to last November's terrorist attacks in Mumbai, India.

The LeT is banned in Pakistan. In January, the Pakistani government also banned Jamaat-ud-dawa (JuD), the philanthropic arm of LeT, under pressure from the United States and India.

Referee Chris Broad was traveling in a van in the same convoy as the Sri Lankan team bus when the attackers opened fire with automatic weapons, grenades and at least one rocket launcher, killing his driver and critically wounding a fellow official.

"There was not a sign of a policeman anywhere," Broad said Wednesday after flying back to Britain. "They had clearly left the scene and left us to be sitting ducks."

He did not say how he managed to escape.

Cricket players said their bus stopped for about 90 seconds while under attack, before the driver stepped on the gas and drove them to the safety of the stadium. Broad and the players said Pakistani officials had promised to give them "presidential style" security as part of efforts to convince them to make the trip.

Some officials have speculated the gunmen - who were wearing backpacks stuffed with food, water and weapons - may have been intending to hijack the bus and hold the Sri Lanka players hostage.

The security lapse was all the more shocking because Pakistan knew any incident would end, perhaps for years, its hopes of regularly hosting international sporting events. Even before the ambush, most teams chose not to visit this cricket-obsessed country because of rising violence by Islamic extremists.

The surveillance video, broadcast on Pakistani television, showed several attackers apparently escaping down a side street on motorcycles while brandishing weapons. Three were shown walking along the middle of the street, apparently in no fear that they were being chased by police.

The assault bore similarities to November's three-day terrorist rampage in the Indian financial capital of Mumbai. The Pakistani group Lashkar-e-Taiba has been blamed for that attack, in which 10 gunmen targeted hotels, a Jewish center and other sites, killing 164 people.

Pakistani authorities have since cracked down on the group, which is based in eastern Pakistan.