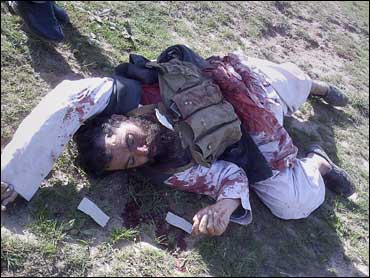 A suicide bomber wearing a police uniform blew himself up inside a police headquarters in southern Afghanistan on Monday, killing nine people and wounding eight others, an official said.

Canadian soldiers and Afghan police stood guard at the blast site and ordered journalists not to take photos, according to an Associated Press reporter at the scene. A spokesman for NATO's International Security Assistance Force said he would investigate the report.

Kandahar is the spiritual birthplace of the Taliban and continues to be a militant stronghold. Afghan police frequently suffer from Taliban attacks from roadside and suicide bombs.

Meanwhile, attackers armed with assault rifles and hand grenades struck a police training academy in eastern Pakistan on Monday, triggering a shootout that killed as many as 22 officers in the same area where Sri Lanka's cricket team was ambushed less than a month ago.

Taliban attacks have spiked the last three years, as militants have taken control of wide swaths of countryside. President Obama is sending 21,000 additional American troops to bolster the record 38,000 already in the country.

President host Bob Schieffer on Sunday that America needs, "to refocus attention on al Qaeda. We are going to root out their networks, their bases. We are gonna make sure that they cannot attack U.S. citizens, U.S. soil, U.S. interests, and our allies' interests around the world."

Mr. Obama told Schieffer his administration's new plan for tackling militants in Pakistan and Afghanistan, "does not change the recognition of Pakistan as a sovereign government. We need to work with them and through them to deal with al Qaeda. But we have to hold them much more accountable."

Officials from more than 70 countries are attending a conference in the Netherlands on Tuesday focusing on Afghanistan. The United States, which announced a new strategy for Afghanistan and Pakistan last week that will focus on fighting al Qaeda, is expected to explain its policies for the region.