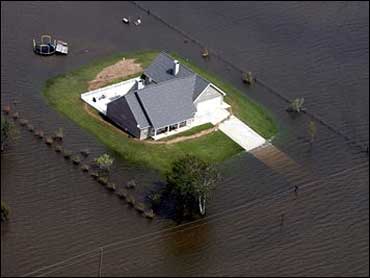 While Rita didn't match the destructive power of Hurricane Katrina, it still left a massive trail of destruction in Texas and Louisiana. The storm caused "tens of millions of dollars" in structural damage in the Houston area alone, one Harris County assessor estimated.

The governors of Texas and Louisiana each flew over areas slammed by Hurricane Rita in their states Sunday, while rescuers in southern Louisiana searched for perhaps hundreds of people trapped by floodwaters. Meanwhile, Houston braced for the return of nearly 3 million evacuees.

An official in Cameron Parrish told CBS News correspondent Randall Pinkston of the total destruction in rural areas of Southwest Louisiana. "If there is a buiding standing — its just barely standing," the official said. "In Holly Beach [a popular vacation and fishing spot] just water tower is standing."

Fishing communities in Cameron Parish were reduced to splinters, with concrete slabs the only evidence of homes that once stood there. Debris was strewn for miles by water or wind.

"Everything is just obliterated," Blanco told a room of emergency officials in Lake Charles' 911 emergency operations center when she returned.

CBS News correspondent Sharyn Alfonsi reports that the impoverished flooded area of New Orleans is already looking "remarkably better" than yesterday. She reports that Nagin is encouraging residents of parts of the city to begin returning as early as tomorrow, and hopes to have up to 300,000 people back by mid-week.

Officials set up regions that would reopen to evacuees on Sunday, Monday and Tuesday, and Texas Gov. Rick Perry urged evacuees from Houston to respect the schedule laid out for an "orderly migration." Commercial airline service to the city also resumed Sunday; many flights in were booked.

In southern Louisiana, rescue crews searched for people still stranded by floodwaters. Hundreds may still be trapped in Vermilion Parish's far-flung regions near the Gulf of Mexico, according to Jason Harmon, spokesman for the Abbeville Fire Department.

Calls for help were still coming in, but a rapid recovery effort is underway in New Orleans, Mayor Ray Nagin said. Parts of the city that were flooded by Hurricane Rita could be pumped day again within a week and officials say repairs to a canal are finishing up. That's far sooner than initially predicted, especially because levee breaches spilled deep flooding into the already ravaged Ninth Ward of New Orleans.

In Texas, Perry, speaking before he took a helicopter tour of the Beaumont area, said the region hit by the hurricane has been secured by law enforcement, but does not have water and sewer services available.

The lack of services means the Gulf Coast is "still a dangerous place for the average citizen to be," Perry

President Bush declared a "major disaster" in Texas, and authorities pleaded with the roughly 3 million evacuees not to hurry home too soon, fearing more chaos.

But after seeing the Gulf Coast pounded twice in the past month, Military officials told President Bush on Sunday that the

Bush said he has been interested in whether the Defense Department should take the lead in disasters "of a certain size."

"It's clearly the case in a terrorist attack," Bush said. "It's going to be a very important consideration for Congress to think about."

In contrast to Katrina, with its death toll of more than 1,000, only one death had been reported by Saturday night. One person was killed in Mississippi when a tornado spawned by the hurricane overturned a mobile home.

But despite its milder affects, Rita still

packed a violent punch
, knocking out hotel windows and flooding homes and roads along the North Texas coast, Pinkston reports.

During the evacuation, a bus burst intoSouth of Dallas while stick in traffic, killing as many as 24 nursing home residents.

In Jasper County, within the Piney Woods of East Texas, trees lying over the roads were making it difficult for sheriff's deputies to check on people.

CBS News correspondent Lee Cowan told Bob Schieffer on Face the Nation that Jasper, Texas, was a temporary home for some Gulf Coast evacuees. But when Katrina

hit Jasper (video)
, it was still a Category 1 hurricane.

"There are almost as many trees down as there are standing," said Jack Jett, chief sheriff's deputy.

"We don't have no money or nothing. It's hard," said Ronda Jordan, who was trying to return home to Galveston.

Adam Suire, 77, said he climbed into an oak tree Friday night with his wife, daughter and son-in-law when Rita flooded his house south of Erath, La. A Coast Guard helicopter plucked the battered family from the tree Saturday afternoon.

Search and rescue teams working with the Federal Emergency Management Agency arrived late Saturday in Lake Charles, La., in a convoy of about a dozen vehicles loaded with water, ready-to-eat meals, medical supplies and fuel. The crews planned to get some rest before getting to work not long after dawn Sunday.

Authorities used military helicopters and an air-conditioned bus Saturday night to move some of the 83 nursing home residents from Beaumont who had been stranded at an elementary school in Fred without power since Friday afternoon.

"It's scary," said Jack Fair, 68, who is undergoing rehabilitation for a concussion. "It's nobody's fault. There's just too much going on." Fair said he was more concerned about fellow residents who were afraid of the dark.

Damage to the vital concentration of oil refineries along the coast appeared relatively light, although industry officials said it was too early to assess whether there would be an impact on oil prices.

Late Saturday, two environmental cleanup workers spread booms and oil absorbent pads along a perimeter fence at the refinery. Knee-deep floodwaters were stained with dark brown crude oil, and the odor of petroleum hung thick in the air.

Rita roared ashore at 3:30 a.m. close to the Texas-Louisiana border as a Category 3 hurricane with top winds of 120 mph and warnings of up to 25 inches of rain. By early Sunday, it was a tropical depression with top sustained winds of 20 mph located about 20 miles southeast of Hot Springs, Ark.

Some of the worst flooding occurred along the Louisiana coast, where floodwaters were 9 feet deep near the town of Abbeville. In Cameron Parish, sheriff's deputies watched appliances and what appeared to be parts of homes swirling in the waters of the Intracoastal Waterway.

About 500 people were rescued from high waters south of New Orleans, some by helicopters.

Elsewhere, a portion of Interstate 10 over the Calcasieu River in Lake Charles was closed after barges broke loose from their moorings and slammed into the bridge.

Some New Orleans residents who had evacuated to Houston because of Katrina were forced to move again as Rita approached.

"We're tired of being pushed from place to place," said Cora Washington, 59, as she and her family sat on cots in Texas A&M University's basketball arena in College Station. "We want to try to go back to New Orleans and pick up the pieces."

Texas officials planned for an orderly return of the nearly 3 million people who had fled ahead of the menacing storm, setting up regions that would reopen to evacuees on Sunday, Monday and Tuesday.