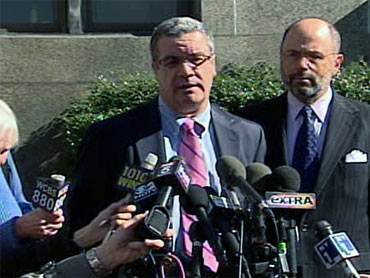 A television producer admitted Tuesday to trying to shake down David Letterman in a case that bared the late-night icon's affairs with staffers, avoiding a long prison sentence by pleading guilty in exchange for six months in jail and community service.

Robert "Joe" Halderman, 52, entered the plea in a Manhattan court to attempted grand larceny after being accused of demanding $2 million to keep quiet about the late-night comic's workplace love life.

Halderman, a former producer for CBS' "48 Hours Mystery," had mined information from reading his then-girlfriend's diary entries about her relationship with Letterman, her boss, authorities said.

The Manhattan district attorney's office said the debt-strapped Halderman threatened to ruin Letterman's reputation, disguising his demands as a deal for a thinly veiled screenplay about the comedian.

"In September of 2009, I attempted to extort $2 million from David Letterman by threatening to disclose personal and private information about him, whether true or false," Halderman said in court, reading a prepared statement at first so quickly that Manhattan state Supreme Court Justice Charles Solomon asked him to slow down.

Halderman acknowledged delivering the threat to Letterman's driver, in the form of a screenplay outline, or "treatment."

"This so-called treatment was just a thinly veiled threat to ruin Mr. Letterman if he did not pay me a lot of money," Halderman said, dressed in a gray suit. He subsequently met with Letterman's lawyer, who eventually gave him a phony $2 million check.

"I knew throughout this time that I was not engaged in a legitimate business transaction with Mr. Letterman and that what I was doing was against New York law," Halderman said, adding that he realized he had violated the privacy of Letterman and his family.

"I feel great remorse for what I have done," Halderman said, apologizing to Letterman, the comic's family, and his own former girlfriend, Stephanie Birkett.

Outside court, Halderman repeated his apologies, declined any interviews and said no more. He remains free on bail until his sentencing, set for May 4. In addition to the jail sentence, he agreed to 1,000 hours of community service; he would have faced up to 15 years in prison if convicted at a trial.

Halderman's passport will be retained but he can petition the court to travel for work and to see his family in Colorado, CBS News has learned.

"I need to talk to you about a segment of my life here that began six months ago. I found myself in some legal trouble, and pretty quickly, it was turned over to the District Attorney's office here in Manhattan. Now, I'd never been involved in anything like this in my life, and I was concerned and full of anxiety and nervous and worried. And the people in the District Attorney's office said, 'This will be handled professionally, this will be handled skillfully, and appropriately.' Well, the matter was resolved today, and they were exactly right - it was handled professionally, skillfully and appropriately. And by way of demonstrating my thanks to the men and women who worked on this, I would like to mention their names now: District Attorney of Manhattan Cyrus Vance, the former District Attorney Robert M. Morgenthau, the Special Prosecutions Bureau in the D.A.'s office and, of course, the New York City Police Department. Thank you all for your help."

"Mr. Letterman is a public figure, but like all New Yorkers, he has a right to a certain degree of privacy in his public life," said Vance, who took over the case from predecessor Robert Morgenthau in January.

Halderman's lawyer, who had raised free-speech and other issues in his attempt to portray the producer's behavior as a business deal, said Halderman ultimately decided he needed to end the case.

"We had a novel defense here involving complicated legal issues. I was very excited about the defense," said the lawyer, Gerald Shargel. "But there would be a long road ahead of us, and considering the risks and the rewards and the need for Joe to put this behind him and get on with his life, those needs were paramount."

"I'm not surprised at all; I would have been shocked in fact had the case had gone to trial," Cohen said. "The costs of litigation were simply too much here for the defense, and the theory - the so-called Tiger Woods theory for defense to extortion - was unlikely to fly."

Cohen added that a deal was not unusual in this case.

"When you hear court officials talking about this being a serious sentence, it is for an attempted extortion like this, but clearly the defense felt it was a good deal and they might likely get more time if they were to go to trial," Cohen said.

"This has been a difficult situation for the people involved and we respect the outcome of the legal process," CBS said in a statement.