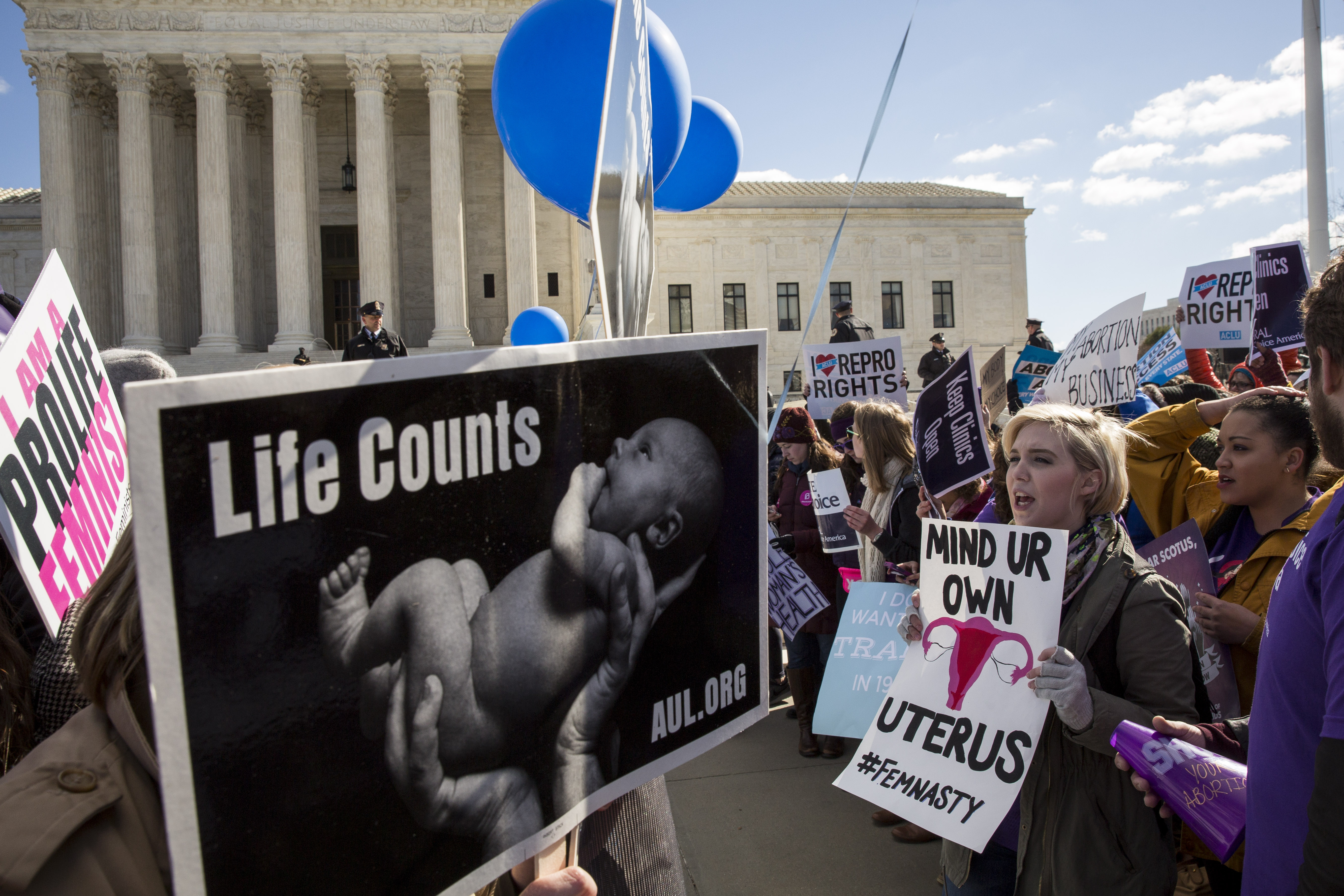 The tightening of restrictions on abortion clinics in many states has emboldened some abortion rights advocates to launch an outreach effort, reminding women they have relatively safe and effective means of ending a pregnancy on their own through use of a miscarriage-inducing drug.

Anti-abortion groups are wary of the phenomenon, disavowing any drive to prosecute women who self-abort but favoring crackdowns on illegal distribution of the drug. Even in the abortion rights community, the outreach effort has raised some concerns.

Dr. Hal Lawrence, president of the American College of Obstetricians and Gynecologists, says it's always preferable for a woman undergoing abortion to be under direct supervision of a medical professional.

Advocates of the new approach say they would agree, under ideal conditions, but they worry that many women -- out of fear, poverty or lack of a nearby clinic -- are not getting access to professional services and need accurate information if they're considering self-induced abortion. Notably, they want to highlight the option of using the drug misoprostol as a generally safe method for inducing a miscarriage within the first 12 weeks of pregnancy.

"There will always be people who need to do this for themselves, and they deserve to have the resources and information so they can do so safely and effectively, free from the threat of arrest," said Jill Adams, executive director of the Center on Reproductive Rights and Justice at the University of California-Berkeley law school.

She is chief strategist for the Self-Induced Abortion Legal Team, formed this year by women from several legal organizations after consultations with reproductive-rights experts and activists.

The team's goals -- outlined in a recent online document -- include halting prosecutions of women for self-induced abortions and expanding access to reliable information on how abortion medication can be obtained and used safely outside the formal health care system. Adams said a short-term goal is finding ways to increase access without breaking any laws.

"We're not here to incite unlawful activity, nor to reprimand anyone if they do step outside the law," she said. "We're here to equip our friends and allies with the information they've been asking for."

In the United States, misoprostol is legally available only through authorized medical professionals; it is commonly used in combination with another drug, mifepristone, as part of a nonsurgical abortion procedure with a strong safety record. In many Latin American and Caribbean countries, misoprostol is widely available, even over the counter in pharmacies in some countries, and has been used extensively for self-induced abortions in countries such as Brazil that have restrictive abortion laws.

Used alone, misoprostol is considered to be effective 75 to 90 percent of the time, according to the World Health Organization. That's lower than the rate of more than 95 percent for the two-drug combination, but reliable enough that the WHO has circulated guidelines for how to use it alone.

"There are all kinds of reasons why it's better for women to have access to professional medical care," said Vicki Saporta, president of the National Abortion Federation. "But when that is not available, and there is a desperate situation, these drugs are very effective, and women can safely terminate a pregnancy."

There's no precise data on the extent of self-induced abortions in the U.S.; they are rarely reported to any authority or statistician. An informal barometer was provided by economist Seth Stephens-Davidowitz, who calculated in a recent New York Times article that there were 700,000 Google searches for information about self-induced abortion in the United States in 2015. Eight of the 10 states with the highest search rates were among those with multiple restrictions on abortion, he said.

There has been heated discussion in Texas about the extent of self-induced abortion there. Its strict anti-abortion laws have contributed to the closure of about half of the state's abortion clinics, and the state shares a border with Mexico, where misoprostol is available in pharmacies without a prescription.

John Seago, legislative director of Texas Right To Life, says he would support efforts by law enforcement to crack down on any illegal trafficking of abortion-inducing drugs, but he opposes prosecutions of the women who terminate their own pregnancies.

"By putting that type of law in place, we'd be dissuading her from seeking medical help afterward," Seago said.

That outlook is shared by most national anti-abortion leaders.

"It's a subject that we in the pro-life movement are struggling to get our heads around," said Eric Scheidler of the Pro-Life Action League. "I'd put the focus on going after the providers of the drug. We don't want to go after the woman."

Although there are laws in numerous states that could be used to prosecute women who self-induce abortions, prosecutions are rare. Adams' legal team has identified 17 such cases in recent years that led to arrests or convictions. Among them:

- An Indiana woman, Purvi Patel, received a 20-year sentence last year in the death of her premature infant. Lynn Paltrow, executive director of National Advocates for Pregnant Women, said the sentence marked the first time a woman in the U.S. has been convicted and sentenced for attempting to end her pregnancy.

- A Georgia woman was jailed without bond last year before prosecutors decided police had wrongly charged her with murder after being told she used pills ordered online to terminate her pregnancy. Kenlissia Jones, 23, was freed and the murder charge dropped; a misdemeanor drug charge was maintained.

- In Indiana, a Chinese immigrant charged with killing her baby by eating rat poison while she was pregnant pleaded guilty to a misdemeanor count of criminal recklessness. It was part of a deal with prosecutors, who dropped a murder charge in 2013. Bei Bei Shuai, 36, spent 178 days in jail.

Lawyer Sara Ainsworth of Legal Voice, one of the groups engaged with Adams' legal team, would like to see more public health officials and legal experts speak out with a message that prosecution of self-induced abortion is inappropriate. "It drives people underground and puts their health at risk," she said. "It creates the back-alley scenario that we're all trying to avoid."

The era of back-alley providers and high-risk self-induced abortions is chronicled in "Every Third Woman in America," a book published last year by Dr. David Grimes, a North Carolina obstetrician-gynecologist. He formerly headed the abortion surveillance division of the federal Centers for Disease Control and Prevention and is an outspoken advocate of abortion rights.

The book suggests 1,000 women a year died in the U.S. in the 1940's from illegal abortions; it recounts the use of laundry bleach and turpentine by women seeking to end pregnancies on their own.

While saying he is grateful that contemporary women have a vastly safer option in misoprostol, Grimes regrets that anyone might feel compelled to forgo medical supervision.

"Why are women being driven to these means when we have an astounding record of safe, legal abortions?" he asked. "Why should we revisit the 1950s?"

Dr. Anne Davis, a professor of obstetrics and gynecology at Columbia University Medical Center, sees the potential for misoprostol but worries that women acting on their own might be sold counterfeit versions or might fail to obtain proper instructions on how to use the drug.

However, Davis, consulting medical director of Physicians for Reproductive Health, which supports abortion rights, expressed empathy with pregnant women in some locations who face confrontations with anti-abortion activists.

"The experience of going to a clinic in a hostile state has become so incredibly unpleasant for women," she said. "If there's a way we can do this that doesn't involve having to face that, of course we're going to try."