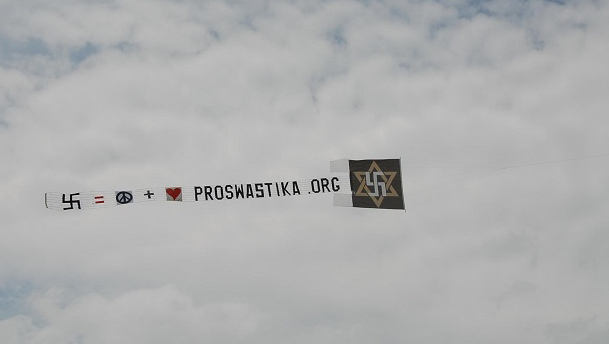 NEW YORK - A banner aiming to change people's minds about what swastikas stand for has stirred outrage after it flew over beaches in New York City and on Long Island.

Some beachgoers were appalled and officials fielded complaints after a plane toted the banner Saturday. The banner featured swastikas, a peace sign, a Star of David and a "pro-swastika" message.

It was arranged by the International Raelian Movement. The group tries annually to remind people that before Adolf Hitler's rise, the swastika was an ancient symbol of well-being to Hindus and Buddhists, among others. The Raelians - who believe human beings were created by extraterrestrials - have faced controversy over similar swastika banners in summers past.

Some beachgoers say there's just no way to rehabilitate a symbol that provokes such strong feelings.

Councilman Mark Treyger, who represents Coney Island, told CBS New York he was none too pleased about the ad.

"How they got clearance to fly this plane. Was there any kind of pre-screening, pre-clearance of what was going to be flown over," he said.

Treyger said regardless of the reason for the ad, it's still hurtful and offensive.

"I will not accept their twisted logic. And I am also going to speak out against sending chilling messages of fear and intimidation to residents," he said.