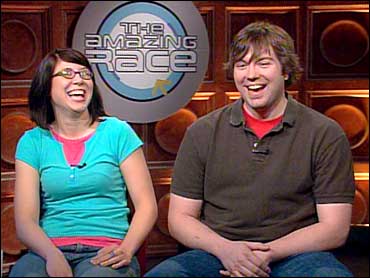 The seven remaining teams in The Amazing Race 9" jockeyed for position in Sicily in Wednesday night's episode against the dominant "Frat Boys."

Unfortunately for the self-proclaimed "dating nerds" from Manhattan, Kan., their racings skills weren't as strong as their romance, and Lori Willems, 25, a Pizza Hut manager, and musician David Spiker, 30, were sent packing.

The show's Web site says, "As Teams drove through the quaint towns of Sicily, "frat boys" Eric & Jeremy continued to set the pace with their third win in five attempts. A fish Detour caused Monica to break down crying, but in the end, dating couple Dave & Lori couldn't catch up in gridlock morning traffic becoming the fifth Team eliminated from "The Amazing Race."

… As Lake & Michelle stepped onto the mat in fifth place, dating couple Ray & Yolanda arrived at the Roadblock. While Ray initially struggled, even flipping his kayak, he eventually made a great shot to complete the task. Dave made a pretty good shot of his own to keep him and Lori in the running, but in the end, Ray & Yolanda fended them off in a footrace to the Pit Stop to finish in sixth place.

Stepping onto the mat in last place, dating couple Dave & Lori heard the news from Phil that they had been eliminated. A teary Lori said, "It's disappointing to be leaving the Race, but we ran a great Race. We did the best that we could. You can't ask for anything more. We enjoyed every minute of it." An introspective Dave added, "[I] already got the prize doing the Race with someone I love dearly. I love Lori with all my heart and you can't buy that with a million dollars. Hopefully, this adventure will launch our adventure in life together. Nerds rule."

On The Early Show Thursday, Lori co-anchor Harry Smith taking part in "Race" takes a toll: "You're traveling through all these time zones, and all these different continents, and it's day after day, and there's not very much time to sleep. (One day), we didn't have much to eat, and I left the water bottle in the airport. You're running up these hills. It's a lot tougher than it looks on television."

David told Smith that, back home in Kansas, "Our friends and family have just been extra-excited. They think we represent them well. … And that's what we wanted out of it, to be ale to share it with people we know and love. And the best way for them to be able to do that is to watch."

And they left the best for last, revealing to Smith that they're getting married. "He's the love of my life!" Lori exclaimed.