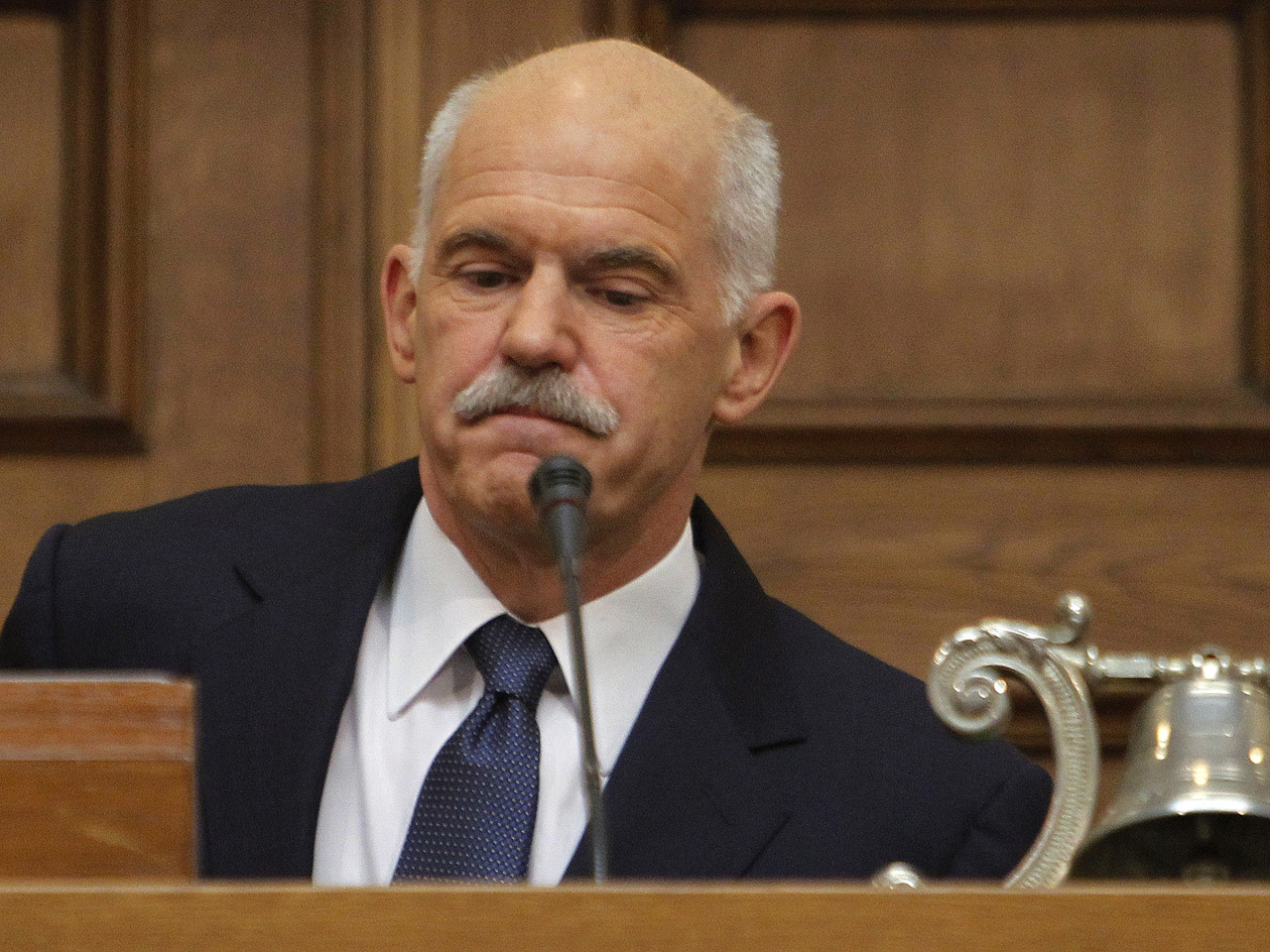 ATHENS, Greece - Europe's days-old plan to solve its crippling debt crisis and restore faith in the global economy has been thrown into chaos by the Greek prime minister's stunning decision to call a referendum on the country's latest rescue package.

A 'no' vote could cause a devastating disorderly debt default in Athens that would cause bank failures across Europe, new recessions in the developed world and see Greece leave the common euro union.

The reaction in the markets was brutal, particularly in Europe, with the Athens exchange down a massive 6.8 percent on worries the turmoil could bring down the government.

"While it may be the democratic thing to do ... what happen if Greece votes 'no', which is possible given how unpopular the bailout plan appears to be amongst Greece's voters?" said Michael Hewson, analyst at CMC Markets. "The resulting fallout could well result in a complete meltdown of the European banking system and throw Europe into turmoil."

The U.S. markets also responded negatively, with the Dow Jones Industrials average down around 200 points in morning trading.

Months of uncertainty over the vote, to be held early next year, would threaten the stability of larger economies like Italy, which saw its borrowing rates rise sharply on Tuesday and would be too expensive to rescue.

The turmoil will also hinder European leaders' efforts to implement their anti-crisis measures, such as getting countries like China to contribute to their expanded bailout fund and convincing banks to accept bigger losses on their holdings of Greek debt.

German Chancellor Angela Merkel and French President Nicolas Sarkozy agreed to hold emergency talks on Greece with the EU, the IMF and eurozone leaders on Wednesday. A separate meeting with the Greek government is also planned ahead of the Thursday summit of leaders from the G-20 economic powers in Cannes, France.

"Germany and France jointly with their European partners are determined to guarantee the full and swift implementation of the summit's decisions, which are more necessary today than ever," a statement from Merkel's office said.

Greek Premier George Papandreou shocked investors, as well as his own citizens, party lawmakers and partners in the eurozone, by announcing late Monday that a plebiscite will be held in what he called "a supreme act of democracy and of patriotism for the people to make their own decision."

Given that Greece is heading for its fourth year of recession next year, investors believe there is a real chance Papandreou may lose the referendum vote if it ever takes place. A victory in the referendum, on the other hand, could give the Greek government a solid mandate to pursue its austerity measures required in exchange for the bailout loans.

A recent opinion poll suggested that 60 percent of Greeks were against the austerity measures that have been required by international creditors from the eurozone and the International Monetary Fund in return for crucial bailout loans. However, other polls show broad support for remaining in the eurozone.

Opposition parties rounded on Papandreou, accusing him of blackmail and vowing to block the vote at all costs, and foreign European officials expressed dismay.

The Netherlands' Labor party indicated that the referendum would be a "deal-breaker" for last week's accord. The conservative Dutch government needs Labor's support to achieve a majority in parliament in support of the deal, meaning Labor could effectively veto it.

A senior politician in Germany's ruling center-right coalition said he was "bemused" by the announcement and made clear that a "no" vote would likely lead to a Greek bankruptcy.

"Then the other countries have to protect themselves, and Greece has to see by what means it gets out of its misery — whether they can stay in the euro, whether they leave, what they do," said Rainer Bruederle, parliamentary leader of the Free Democratic Party, a junior coalition party, on Deutschlandfunk radio.

And Swedish Foreign Minister Carl Bildt tweeted: "I truly fail to understand what Greece intends to have a referendum about. Are there any real options?"

The referendum would be the country's first since 1974, when Greeks voted to get rid of the monarchy, and is expected to be held early next year should the government get through the confidence vote.

The prospect of months of uncertainty has deflated any remnants of optimism over last week's grand European plan to contain the debt crisis.

After long and complex negotiations, eurozone leaders agreed last Thursday that private holders of Greek bonds should take a 50 percent loss on their holdings, reducing Greece's debt burden. They also agreed to boost the firepower of the bailout fund to euro1 trillion ($1.37 trillion) and to increase banks capital buffers.

Fears that the plan could come undone drove a broad retreat in global markets. Germany's DAX and France's CAC-40 both slid 5.2 percent but Italy's main index fared even worse, slumping by 6.7 percent.

The euro fell 1.5 percent to $1.3648 while borrowing rates jumped higher for Italy and Spain, considered the next weakest links in the crisis.

In Athens, Greeks on the street were largely negative on the referendum. Former customs worker Panagiotis Kandylas said he expected the vote to go ahead, but added that "it will come tumbling down on (Papandreou's) head."

"In his attempt to save himself, Mr Papandreou set a divisive, blackmailing dilemma that endangers our future and our position in Europe," New Democracy party leader Antonis Samaras said. "I explained to the president that New Democracy is determined at all costs — at all costs — to prevent such rash experiments, and it can do that."

He did not elaborate on what he planned to do.