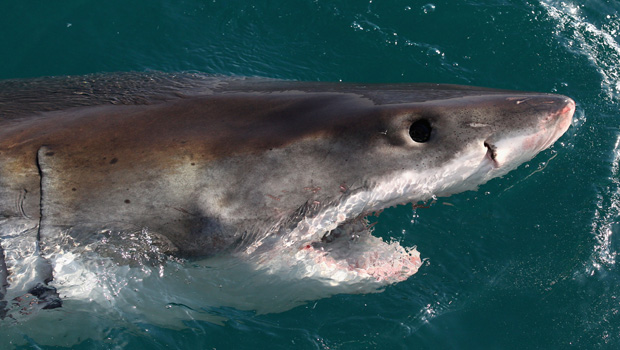 The number of great white sharks appears to be surging in the ocean off the Eastern U.S. and Canada, reversing decades of decline. That's bad news if you're a seal, but something experts say shouldn't instill fear in beachgoers this summer.

The study by National Oceanic and Atmospheric Administration scientists, published this month in the journal PLOS ONE, says the population of notoriously elusive great white sharks has climbed since about 2000 in the western North Atlantic.

The scientists behind the study attribute the resurgence to conservation efforts, such as a federal 1997 act that prevented hunting of great whites, and greater availability of prey. The species is listed as vulnerable by the International Union for Conservation of Nature.

"The species appears to be recovering," said Cami McCandless, one of the authors. "This tells us the management tools appear to be working."

Great whites owe much of their fearsome reputation to the movie "Jaws," which was released 39 years ago Friday. But confrontations are rare, with only 106 unprovoked white shark attacks - 13 of them fatal - in U.S. waters since 1916, according to data provided by the University of Florida.

They are, though, ecologically critical. They are apex predators - those at the top of the food chain - and help control the populations of other species. That would include the gray seal, whose growing colonies off Massachusetts have provided food.

"You should be concerned for a good reason," said James Sulikowski, a professor of marine science at the University of New England in Portland, who was not involved in the study but noted it could help better target future conservation efforts for great whites. "We need these sharks in our waters."

A separate study published in PLOS ONE this month suggested that great whites - also known just as white sharks - are also returning to abundance in the eastern north Pacific Ocean.

"There's this general pattern of where the white sharks are protected, they seem to recover," said Tobey H. Curtis, one of the authors of the Atlantic study.

The elusive nature of white sharks and the lack of historical data about their population levels required the authors to rely on sightings of sharks, as opposed to other ways to count sea life, such as commercial fishing surveys and census counts, Curtis said.

The research adds recent unpublished data to previously published records to establish 649 confirmed white shark sightings from 1800 to 2010. The data show that a period of decline in white shark abundance during the 1970s and 1980s has reversed, the authors said.

White shark abundance in the western North Atlantic declined by an estimated 73 percent from the early 1960s to the 1980s, the report says. Shark abundance is now only 31 percent down from its historical high estimate in 1961, the report states. The report does not provide a local estimate for the great white shark population, which some scientists say is between 3,000 and 5,000 animals.

The report also illuminates where people encounter white sharks - mostly between Massachusetts and New Jersey during the summer and off Florida in the winter, it says.

They also migrate based on water temperature and availability of prey, and are more common along the coast than offshore, the report states.