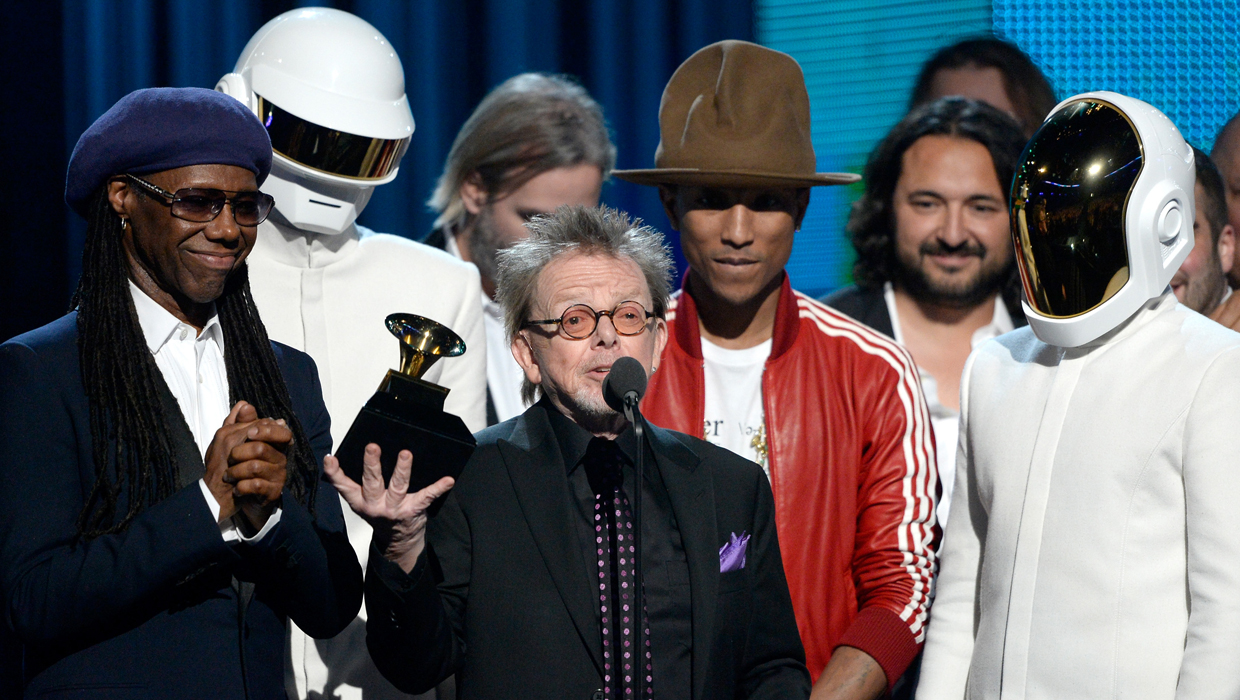 The 56th Grammy Awards saw wins by Lorde, Macklemore & Ryan Lewis and Daft Punk, plenty of performances and collaborations -- and even a Beatles reunion. Thirty-three couples also wed at the Staples Center in Los Angeles -- live on TV.

The French helmet-wearing electronic duo of Thomas Bangalter and Guy-Manuel De Homem embraced each other during the win, but didn't utter any words. They left that to collaborators Pharrell Williams, Paul Williams Giorgio Morode and Nile Rodgers.

And when they were announced as winners of best pop duo/group performance for "Get Lucky," the guys took the stage but again didn't speak. So, the song's collaborator Pharrell Williams did it for them: "On behalf of the robots, I'd like to say man, thank you, thank you, thank you. Of course, they want to thank their families." The same thing happened with the record of the year honor, which also went to "Get Lucky." Williams did the talking once again: "I suppose the robots would like to thank....Ultimately, I bet France is really proud of these guys right now."

In the end, Daft Punk won four awards, as did Williams and Macklemore & Ryan Lewis.

"Wow, we're here on the stage right now," a green-tux-wearing Macklemore said before thanking fans for their support. "Without them, there would be no us."

Seventeen-year-old New Zealand singer Lorde received best pop solo performance for her hot single "Royals." "This is the one thing that I did not expect the most tonight," she said. She later picked up song of the year with songwriter Joel Little. "Thank you to everyone who has let this song explode," Lorde said.

There were some emotional moments, too. Bruno Mars dedicated his best pop vocal album honor to his mother, who died last year. "Ma, I know you're watching; I hope you're smiling. I love you very much," she said.

Jay Z and Justin Timberlake won best rap/sung collaboration for "Holy Grail." Jay Z took the stage for this one, giving a shout-out to both his wife, Beyonce, and their daughter, Blue Ivy. "I want to thank God -- I mean a little bit for this award -- but mostly for all the universe for conspiring and putting that beautiful light of a young lady in my life." He added, "I wanna tell Blue that Daddy's got a gold sippy cup for you" as he pointed to his gramophone trophy.

Jay Z and Beyonce kicked off the night with a steamy rendition of "Drunk in Love." And that was just the start of a ceremony chock-full of performances. Lorde sang her winning song "Royals," and Katy Perry brought out a witchy performance of "Dark Horse." Hunter Hayes also took the stage in the first hour.

Collaborations were plentiful, too. Chicago and Robin Thicke went retro with a medley of Chicago songs, including "Saturday in the Park." And of course -- Thicke tossed a little "Blurred Lines" into the mix. Keith Urban teamed with buzzed-about singer-guitarist Gary Clark Jr., and Imagine Dragons performed with Kendrick Lamar.

Taylor Swift slowed things down with a ballad -- sitting at the piano for a rendition of "All Too Well." Pink took on some acrobatics for her performance, and Musgraves, winner of country album of the year, also took the stage.

Ringo Starr received a standing ovation for his performance of "Photograph." The former Beatle took the stage once again, joining McCartney for a version of "Queenie Eye," a song off McCartney's latest album, "New." The pair hugged after the song -- bowing as the crowd gave them a standing ovation. The pairing coincides with the 50th anniversary of the Beatles' arrival to the U.S., which will be celebrated with a special event on CBS next month.

The star-studded collaborations continued with a special performance featuring Merle Haggard, Kris Kristofferson, Willie Nelson and Blake Shelton. Sara Bareilles and Carole King took on a mix of their own sings -- Bareilles' "Brave" and King's "Beautiful." After their performance, King said, "I like her." One of the stand-out team-ups of the night took place with a get-on-your-feet version of Daft Punk's "Get Lucky," featuring Nile Rodgers, Stevie Wonder and Williams. It marked only the second time Daft Punk performed live on TV.

And 33 couples wed live on television during a mash-up of music, led by Macklemore & Ryan Lewis' same-sex marriage anthem "Same Love." Queen Latifah did the honors, saying, "Do you each declare that you take each other as spouses?" Then Madonna surfaced to perform "Open Your Heart" as the couples exchanged vows and rings.

To cap off the night's "in memoriam" segment Miranda Lambert and Billie Joe Armstrong of Green Day paid tribute to the late Phil Everly with a rendition of the Everly Brothers' "When Will I Be Loved?"

The night ended with yet another collaboration from Nine Inch Nails, Dave Grohl, Queens of the Stone Age and Lindsey Buckingham of Fleetwood Mac.

Justin Timberlake walked away with two awards in the pre-telecast -- best R&B song for "Pusher Love Girl" and music video for "Suit & Tie.”

Adele won best song written for visual media for "Skyfall," and Williams, Rihanna, Ziggy Marley, Michael Buble and Imagine Dragos were also early winners. Marley, who walked away with the best reggae album win, didn't even expect a nod. "I wasn't thinking about it. I was surprised. It's cool," he told CBS News about the nomination for his live album. "We were on tour for a while -- and said, 'Let's do some recording.' I liked the way it sounded. We put it out quietly and simply."

Going into the night, Jay Z led the list of nominees with nine nods, and Lamar, Macklemore & Lewis, Justin Timberlake and Williams were not far behind with seven each.

Host LL Cool J perhaps summed up the night best at the start of the show: "Music has the power to bring people together like nothing else in this world," he said, adding, "Today we're making musical history."