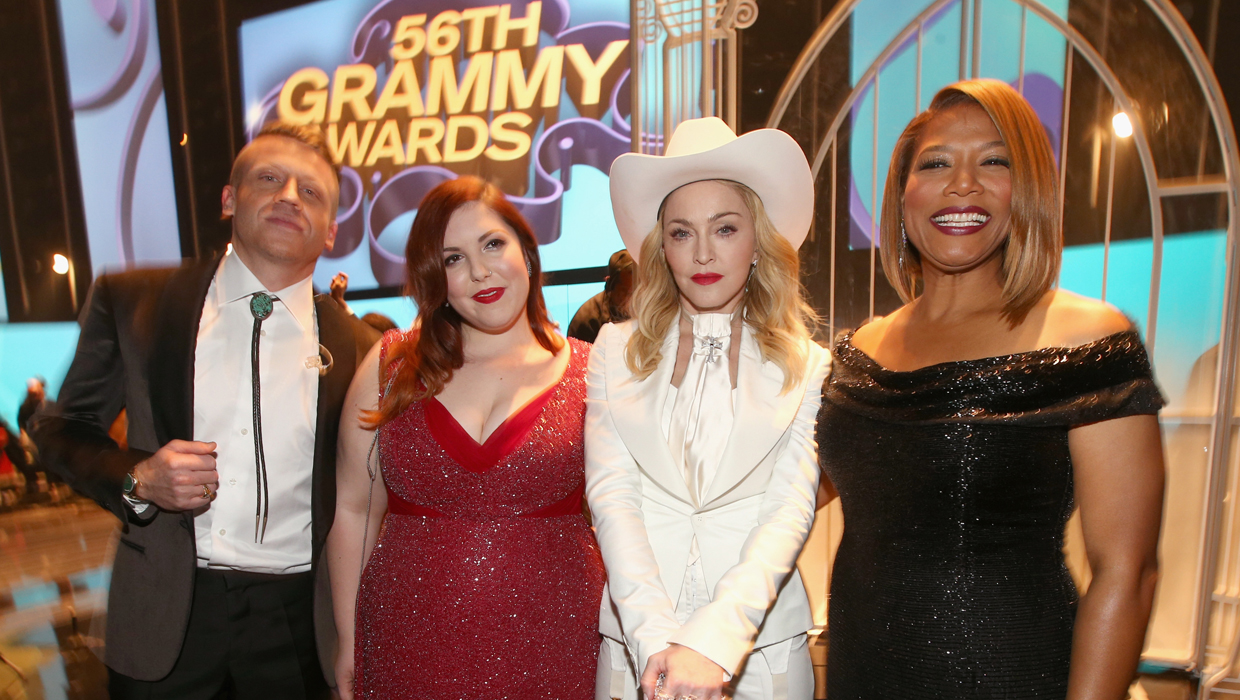 Some of music's biggest acts cozied up Sunday night for the 56th annual Grammy Awards at Los Angeles' Staples Center.

Hosted by LL Cool J, this year's awards ceremony was marked by a string of high-profile musical collaborations, starting with one of Hollywood's most famous power couples.

Beyonce Knowles and Jay Z set the tone of the night as the first performers. Clad in a sheer onesie, Knowles was joined onstage by her rapper husband for their duet, "Drunk in Love."

Later on in the night, Jay Z showed that he was a proud papa when he won a Grammy Award for his collaboration with Justin Timberlake, giving a shout out to his two-year-old daughter with Beyonce, Blue Ivy Carter.

"I wanna tell Blue, 'Look, Daddy got a gold sippy cup for you," Jay Z told the audience, pointing to his Grammy statue.

Robin Thicke and Chicago also boogied down together, with renditions of the rock group's 1970 classic "Does Anybody Really Know What Time It Is?" before launching into Thicke's 2013 hit, "Blurred Lines," complete with plenty of background pyrotechnics and a glittery gold-plated mic.

Imagine Dragons and rapper Kendrick Lamar also teamed up for a strobe-infused performance of "Radioactive," but the biggest collaboration of the night came when Julia Roberts took to the stage to introduce Paul McCartney and Ringo Starr, to mark the 50th anniversary of the Beatles' performance on CBS' "The Ed Sullivan Show."

The two only surviving Beatles band members joined each other for "Queenie Eye," much to the delight of fans watching in the audience and at home. On Feb. 9, CBS will air a special, "The Night That Changed America: A Grammy Salute to the Beatles," in celebration of the anniversary.

Another must-see performance came when Queen Latifah introduced Macklemore & Ryan Lewis, along with Mary Lambert, to perform their hit, "Same Love," which addresses issues of tolerance and homophobia. During the number, Queen Latifah chimed in to marry 33 Los Angeles couples standing in the audience.

"By the power invested in me by the State of California, I know pronounce you married couples," Latifah announced, as some in the audience began to visibly weep.

Madonna then joined in and sang "Open Your Heart" to the newlyweds.

The collaborations didn't end there.

Miranda Lambert joined Green Day frontman Billie Joe Armstrong for an acoustic rendition of the Everly Brothers' hit "When Will I Be Loved" during the Recording Academy's "in memoriam" tribute special. Phil Everly died on Jan. 4.

Daft Punk was joined by Pharrell Williams, Nile Rodgers and Stevie Wonder for Grammy-winning song "Get Lucky." It marked only the second time the French electronic duo has ever performed on live television.

The group went on to win album of the year for "Random Access Memories."

Tell us: What was your favorite team-up of the night?