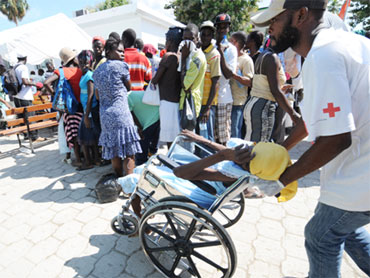 Hours after a party to celebrate his pending high school graduation, an 18-year-old is believed to have shot and killed his grandparents, his mother and two family friends before killing himself, the sheriff said on Monday.

Logan County Sheriff Michael Henry said he did not know if authorities would ever know why Scott Moody committed the shootings early Sunday morning, "but we're going to try."

Moody also shot his younger sister, who was in critical condition on Monday.

After the party to mark the graduation of Moody and one of the victims, Moody went to the neighboring farmhouse and killed his grandparents with a .22-caliber rifle, then came back home, where he shot the others, then himself, Henry said.

Moody and Megan Karus were to have graduated Sunday afternoon from Riverside High School in nearby De Graff. The school held the commencement as scheduled and school officials announced the shootings afterward.

The houses are about a quarter-mile apart along a two-lane state route a mile west of the city of 13,000 people 45 miles northwest of Columbus. Fields where corn and soybeans are grown surround the white-paneled, two-story homes.

Moody's sister and the lone survivor, Stacy Moody, 15, called her stepsister and told her that she and her mother had been beaten up and that she could not wake up her mother, Henry said.

The stepsister, Nicole Vagedes, went to the house and called 911, telling deputies about finding bodies throughout the house.

Later, she said, "Oh my God, there's one in the living room. There's another one on the couch."

Henry said the grandparents, Sharyl, 66, and Gary Shafer, 67, were shot in their kitchen.

Sheri Shafer, Scott Moody and Paige Harshbarger, 14, a family friend, were found in upstairs bedrooms of the house that Shafer shared with her children. Karus, 19, another family friend, was found on a living room couch.

Henry said the sheriff's office have received nuisance calls about loud music and parties at the house, but he did not know whether the complaints were about Scott Moody.

"It's tough on us," Henry said of the shooting. "We knew these people. We're familiar with these kids. I feel so badly for these families, this community."

People drifted in and out of the sheriff's office Sunday afternoon, hugging and crying. One woman nearly collapsed moments after arriving and speaking with people at the office, and deputies had to help her inside.

"Dealing with a small community like this, everyone knows everyone," Henry said.