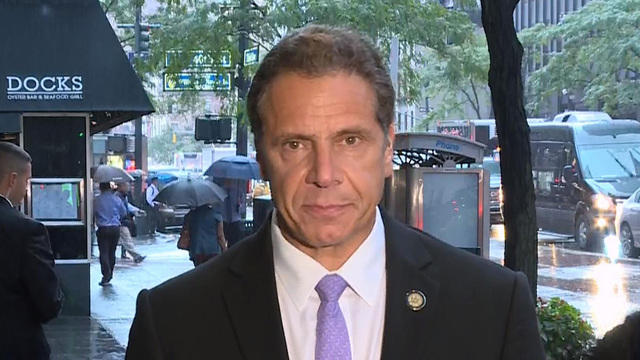 Authorities this morning identified a suspect in connection with the New York City bombing Saturday evening that injured 29 people.

When asked about the state of the investigation this morning, New York Governor Andrew Cuomo told “CBS This Morning” anchor Charlie Rose that he believed “it was clearly a terrorist activity.”

“Prosecutors will be careful because they want to make sure they have all of the elements of a crime, but you set off two bombs in New York City, Charlie, that is terrorism. It’s with an intent to cause damage and danger and intimidate a civilian population, so that, by definition, is terrorism.

“What we didn’t know yesterday and we don’t know yet is, is anyone taking credit and is it linked to international terrorism? We hadn’t heard from ISIS, et cetera, we didn’t have a suspect who was from foreign origin, so that was the open question.”

Cuomo said he expected to get an answer about a suspect today, and indeed, the FBI and ATF raided a home in Elizabeth, N.J. this morning, after releasing a wanted poster for Ahmad Khan Rahami, 28.  Officials tell CBS News that he is linked to the blast and to unexploded devices in Chelsea, to a trash can explosion in Seaside Park, N.J., and to a backpack filled with explosives found in Elizabeth.

Cuomo was optimistic that the investigation will be able to probe the devices found in New York and New Jersey. “From the bombs that were undetonated you can often get good evidence,” Cuomo said. “You can get fingerprints, DNA, et cetera.”

Co-anchor Norah O’Donnell asked, “The connection between the bombs in Chelsea and New Jersey, is this part of a larger threat facing this area?”

“But again, this is preliminary. The investigation is proceeding quickly. I believe we will soon be targeting an individual, a person of interest, and it may very well turn out that there was a foreign connection to this incident.

“But again, I was a former attorney general in New York and I participated in many of these investigations. They take different twists and turns. And you want to be careful what you say early on because you want to protect the information, but that would be my guess.”

President Obama and other world leaders are arriving in New York for the United Nations General Assembly which opens this week. Governor Cuomo ordered a thousand more officers to patrol.