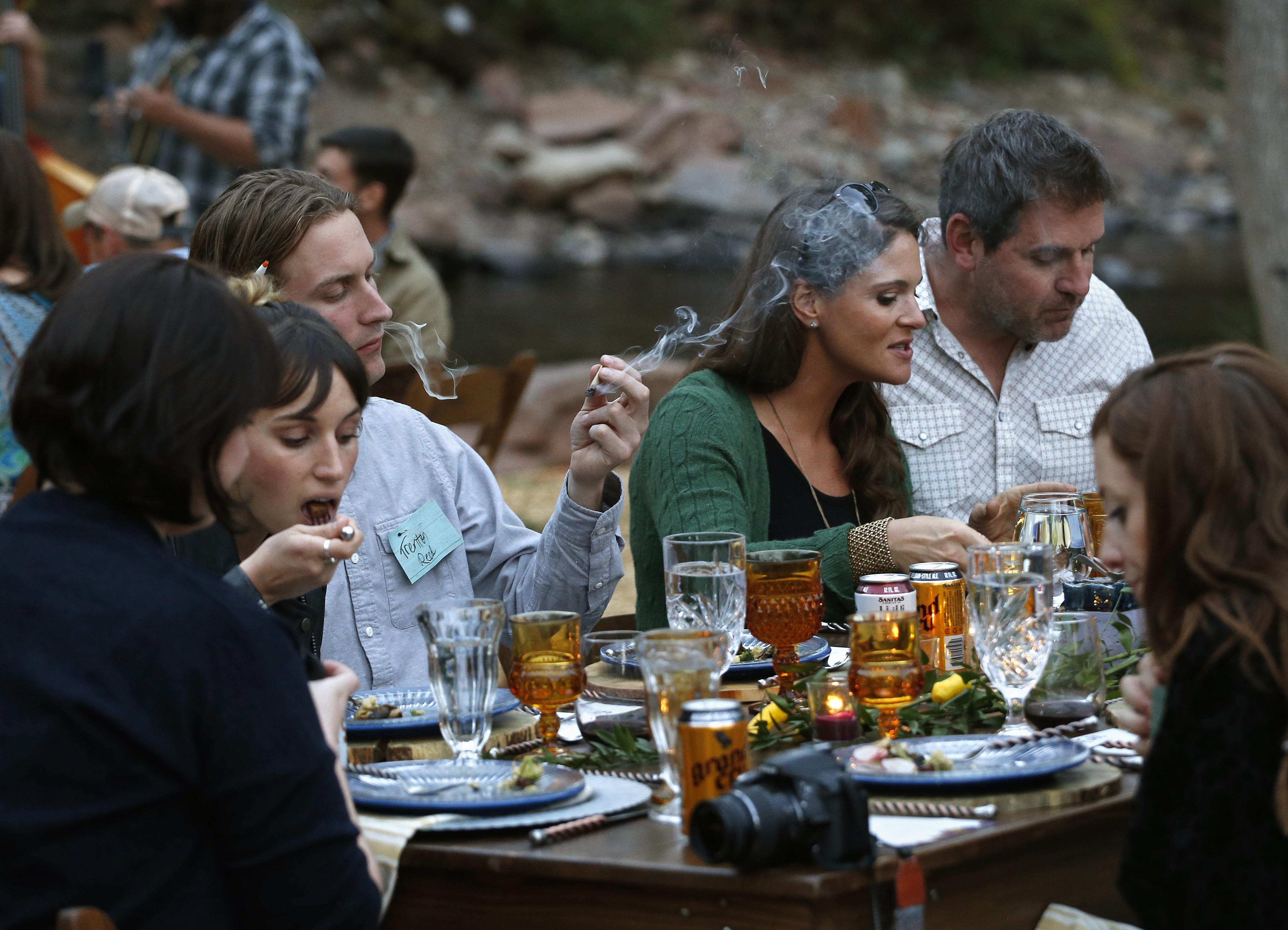 LYONS, Colo. How to set a tone of woodsy chic at a four-course candlelight dinner served under the stars in the Colorado foothills:

Beer and wine pairings with each course, check.

The 100 diners at this $200-a-plate dinner smoked a citrus-smelling marijuana strain to go with a fall salad with apples, dates and bacon, followed by a darker, sweeter strain of pot to accompany a main course of slow-roasted pork shoulder in a mole sauce with charred root vegetables and rice.

And with dessert? Marijuana-infused chocolate, of course, grated over salted caramel ice cream and paired with coffee infused with non-intoxicating hemp oil.

The diners received small glass pieces and lighters to smoke the pairings, or they could have their marijuana rolled into joints by professional rollers set up next to a bartender pouring wine.

The marijuana industry is trying to move away from its pizza-and-Doritos roots as folks explore how to safely serve marijuana and food. Chefs are working with marijuana growers to chart the still-very-unscientific world of pairing food and weed. And a proliferation of mass-market cheap pot is driving professional growers to develop distinctive flavors and aromas to distinguish themselves in a crowded market.

“We talk with the (marijuana) grower to understand what traits they saw in the marijuana... whether it’s earthy notes, citrus notes, herbal notes, things that we could play off,” said Corey Buck, head of catering for Blackbelly Restaurant, a top-rated farm-to-table restaurant that provided the meal.

The grower of one of the pot strains served at the dinner, Alex Perry, said it won’t be long until marijuana’s flavors and effects are parsed as intently as wine profiles. But that’s in the future, he conceded.

“It’s still looked down upon as a not-very-sophisticated thing,” said Perry, who grew a strain called Black Cherry Soda for his company, Headquarters Cannabis.

Holding his nose to a small jar of marijuana, Perry said, “If I asked my mom or my dad what they smell, they’re going to say, ‘skunk,’ or, ‘It smells like marijuana.’ But it’s like wine or anything else. There’s more flavor profile there.”

But chefs and pot growers trying to explore fine dining with weed face a legal gauntlet to make pot dinners a reality, even where the drug is as legal as beer.

Colorado’s marijuana retailers can’t also sell food, so guests at this dinner had to buy a separate $25 “goodie bag” from a dispensary for the pot pairings.

The bags came with tiny graters for diners to shave the pot chocolate onto their ice cream themselves; the wait staff could not legally serve a dish containing pot, even though the event was private and limited to people over 21. Diners were shuttled to and from the event by private bus, to avoid potentially stoned drivers leaving the dinner.

Marijuana dining may become more accessible in coming months, though.

Denver voters this fall will consider a proposal to allow marijuana use at some bars and restaurants as long as the drug isn’t smoked, with the potential for new outdoor marijuana smoking areas.

And two of the five states considering recreational marijuana in November – California and Maine – would allow some “social use” of the drug, leaving the potential for pot clubs or cafes.

Currently, Alaska is the only legal weed state that allows on-site marijuana use, with “tasting rooms” possible in commercial dispensaries. But that state is still working on rules for how those consumption areas would work.

For now, marijuana dining is limited to folks who hire private chefs to craft infused foods for meals served in their homes, or to special events like this one, limited to adults and set outside to avoid violating smoke-free air laws.

Guests at the Colorado dinner were admittedly experimenting with pairing weed and food, many giggling as they toked between bites. It became apparent late in the evening that a rich meal doesn’t counteract marijuana’s effects.

“What was I just saying?” one diner wondered aloud before dessert. “Oh, yeah. About my dog. No, your dog. Somebody’s dog.”

The man trailed off, not finishing his thought. His neighbor patted him on the back and handed him a fresh spoon for the ice cream.

Diners seemed genuinely curious about how to properly pair marijuana and food without getting too intoxicated.

“I am not a savant with this,” said Tamara Haddad of Lyons, who was waiting to have one of her pot samples professionally rolled into a joint. “I enjoy (marijuana) occasionally. I enjoy it with friends. I’m learning more about it.”

She laughed when asked whether marijuana can really move beyond its association with junk-food cravings.

“I have also munched out after being at the bar and drinking martinis and thinking, ‘Taco Bell sounds great,’” she said.