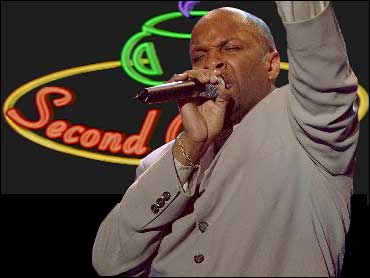 For the Easter weekend, Donnie McClurkin returns to The Saturday Early Show's Second Cup Café to perform some singles from his current number one gospel album, "Donnie McClurkin … Again."

Music lovers worldwide are familiar with the religious-inspired music of McClurkin. They helped him push his last album, "Live in London," to double- platinum success. But the singer says he gives the credit to God.

McClurkin's music combines urban/pop music and traditional gospel, a combination that's likely to have listeners singing along and tapping their feet. Some of his songs are even in heavy rotation on R&B radio stations.

For his new album, "Donnie McClurkin … Again" the gospel singer wrote seven of the album's eleven songs — working with producer and creative soul mate, Kevin Bond. Several of the selections were recorded live at the renowned West Angeles Church of God in Christ in Los Angeles.

One of the highlights of the album is a duet with gospel legend Yolanda Adams on "The Prayer," written and produced by producer David Foster.

McClurkin was formerly an assistant pastor to Pastor Marvin Winans at Detroit's Perfecting Church. He was later dispatched by his mentor in 1999 to Freeport, New York where he founded and still pastors the Perfecting Faith Church. He says his greatest calling is in the ministry.

But, fans don't have to fear losing the talented gospel singer because McClurkin says he is able to balance his church duties with his performances.