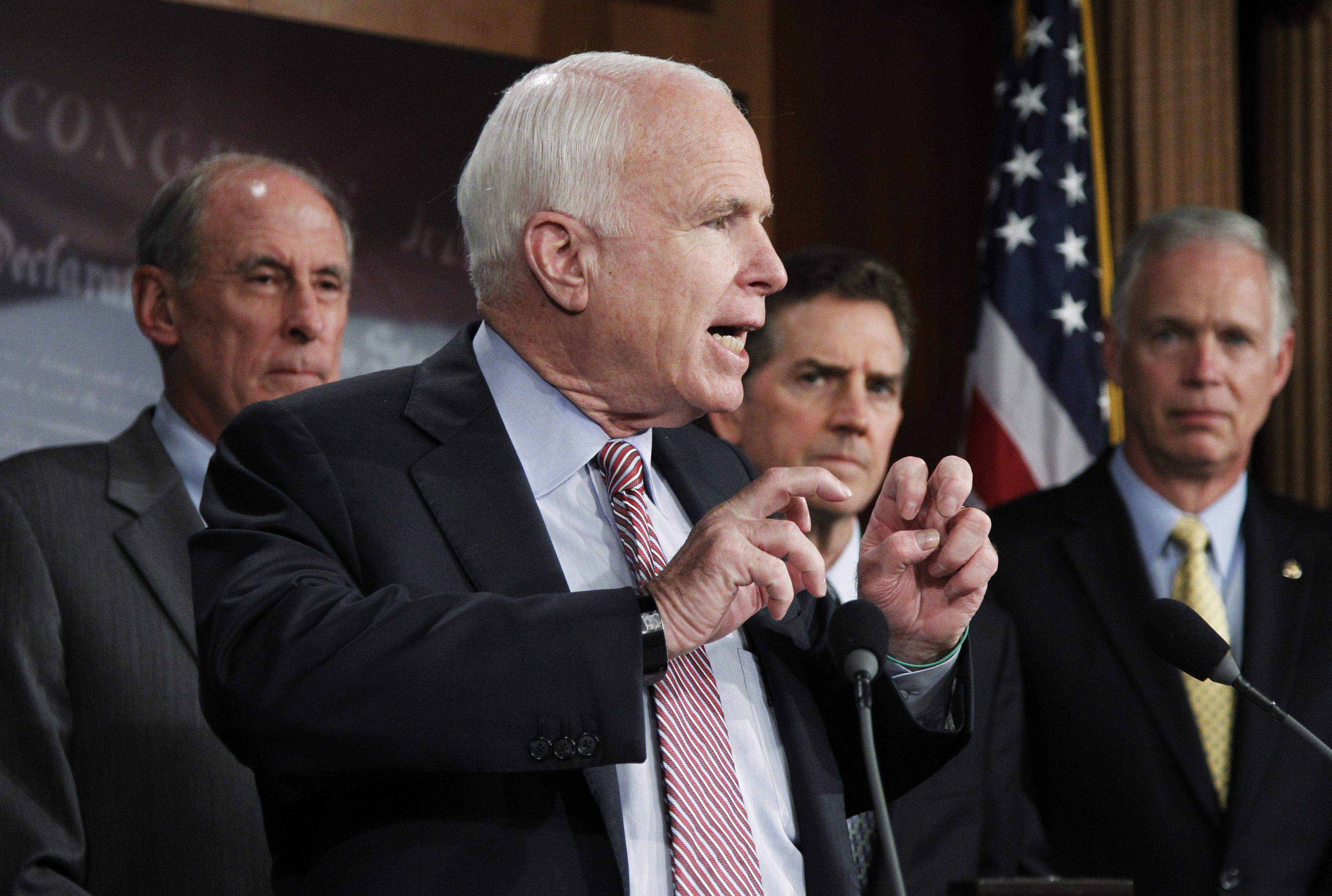 After 8 years of combat in Iraq, the United States Congress remains divided over the need for U.S. troops in that country. The president's official announcement today that the remaining U.S. troops will withdraw from Iraq by the end of the year drew praise from Democrats while high profile Republicans questioned whether the move is premature.

Republican Sen. John McCain said in a statement that the president's decision is a "harmful" setback for U.S. interests in the Middle East.

"I respectfully disagree with the President," McCain said. "This decision will be viewed as a strategic victory for our enemies in the Middle East, especially the Iranian regime, which has worked relentlessly to ensure a full withdrawal of U.S. troops from Iraq. It is a consequential failure of both the Obama Administration -- which has been more focused on withdrawing from Iraq than succeeding in Iraq since it came into office -- as well as the Iraqi government."

Sen. Lindsey Graham, R-S.C., echoed McCain's sentiments. "I fear this decision has set in motion events that will come back to haunt our country," he said.

Democrats largely praised the decision as a promise then-Senator Obama made while campaigning for President.

"I commend the President for a promise made and a promise kept," House Minority Leader Nancy Pelosi said in a statement. Pelosi said the move honors "the U.S.-Iraq Security Agreement and the wishes of the American people to bring all our troops home by the end this year."

That U.S.-Iraq Security Agreement was brokered by Iraqi leaders and President George W. Bush. As part of that agreement, President Bush approved the timeline that would bring U.S. troops home by the end of this year.

Congress has approved $800 billion that the United States has spent on the Iraq war and that country's reconstruction. That's around the same amount Congress authorized for the Troubled Asset Relief Program that bailed out banks to avoid economic catastrophe in 2007. Or close to the price of the president's stimulus plan that attempted to get the economy out of recession in 2009.

But 4,479 U.S. troops lost their lives fighting for the United States in Iraq and members of Congress have grown more and more weary of the war. Lawmakers overwhelmingly voted to approve military action in October of 2002, voted based on the false premise that Saddam Hussein had weapons of mass destruction.

In the last half of the war, members of Congress questioned whether it was worth spending money on this war in the midst of a recession. Rep. Maxine Waters, D-Calif., and a group of liberal Democrats formed an "Out of Iraq" Congressional Caucus in 2005 to push for an immediate withdrawal from Iraq.

In a statement today, Waters said that the members formed the group out of concern that "the war would place members of our armed forces at great risk while also depleting resources needed for our nation's domestic agenda."

Waters added that "as the war in Iraq draws to a close, it is my hope that this conflict will serve as a solemn reminder of the costs of war. We must carefully reexamine our approach to national security and how we view the United States' role in promoting international peace and security."

House Speaker John Boehner said he's concerned that the withdrawal could reverse progress made in Iraq, but he urged continued engagement between the two countries.

In a statement, Mr. Boehner said that despite U.S. soldiers leaving Iraq, "we owe it to them to continue engaging with the Iraqi government in a way that ensures our hard-fought gains translate into long-term success."

Boehner added: "I'm hopeful that both countries will work together to guarantee that a free and democratic Iraq remains a strong and stable partner for the United States in the Middle East."