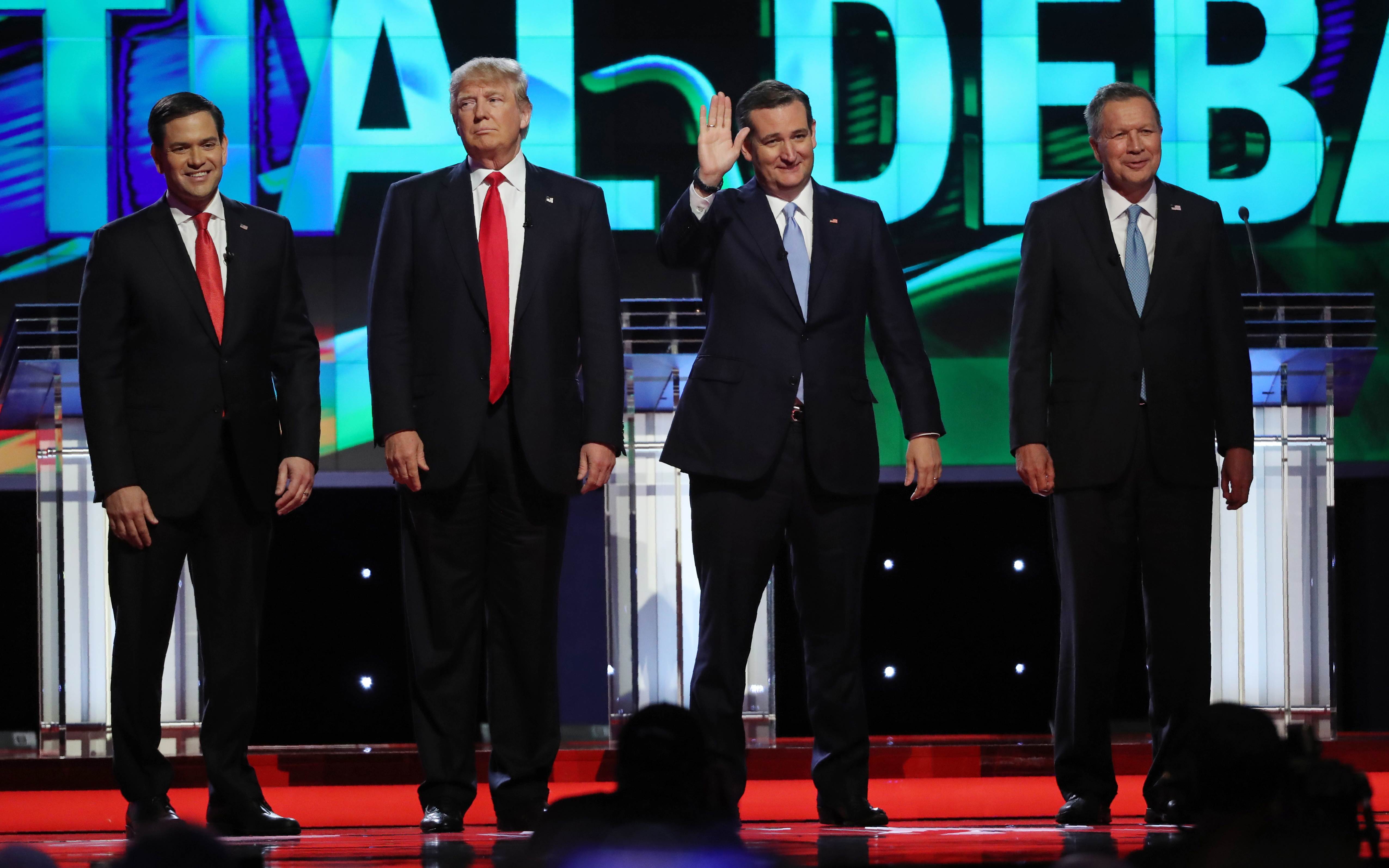 10:57 p.m. Closing statements: Kasich touts the positive campaign that he has run and will continue to run, he says. He asks his "Buckeyes" in Ohio for their vote in the critical winner-take-all primary on Tuesday.

Rubio says if Americans vote for him, the U.S. will work hard to do to improve the future of the country for children.

Cruz says he "can't wait" to stand on the debate stage with Hillary Clinton in the general election and says he would repeal Obamacare, abolish the IRS and stand with cops, firefighters and soldiers.

Trump says the Republican Party has a "great chance to embrace millions of people they have never known before." He also suggests it would take "centuries to recover" if Democrats win the White House in November.

10:46 p.m. Trump, who constantly says he is self-funding his campaign, is asked if he would pledge not to take outside contributions in the general election.

"I have not made that decision yet," Trump says, adding that he has already turned down about $275 million during the primary process.

10:40 p.m. Kasich is asked why shouldn't the person with the most delegates get the GOP nomination. The Ohio governor says "math doesn't tell the whole story in politics" and says "let's not get ahead ourselves."

Trump says that whoever gets the most delegates should win, and says "make me president" when Cruz starts talking. Cruz says he could be president of the Smithsonian.

Cruz says only he and Trump have a path to the nomination and points out he has defeated Trump in eight states so far.

10:33 p.m. Trump is asked to address the situation involving a Trump supporter who was arrested Thursday for punching a protestor at one of his campaign events. He's asked whether his tone has invited this violence.

"I hope not. I truly hope not," says Trump, who goes on to defend his supporters' anger over what he called bad trade deals and job losses.

He adds, "We have some protesters who are bad dudes...They are swinging, they are really dangerous."

"I certainly do not condone that at all, Jake," he says in response to the initial question.

"I used to think [German Chancellor Angela] Merkel was a great leader," adds Trump, who called Germany a "disaster."

10:19 p.m. Tapper says the Republican mayor of Miami, who has endorsed Rubio, wanted to know if the Florida senator would acknowledge the reality of climate change and accept the scientific evidence that proves it.

"Well, sure, the climate is changing and one of the reasons is because the climate has always been changing," Rubio says.

10:10 p.m. Rubio, a Cuban-American, says he would like the U.S. relationship with Cuba to change but it would require the Cuban government to change.

Trump says, "I want a much better deal" with Cuba.

Cruz, whose father is from Cuba, says he would break off the U.S. relationship with Cuba if he is elected president.

10:06 p.m. Rubio is asked what he would do to help military veterans as president. He mentioned the V.A. accountability bill he worked on with House Veterans Affairs Committee Chairman Jeff Miller of Florida and said he also gives Sen. Bernie Sanders "credit" for the legislation. Sanders previously served as the ranking member on the Senate panel.

9:56 p.m. After American student Taylor Force was killed in a stabbing attack in Tel Aviv this week, Trump is asked if he can still stay neutral in Israeli-Palestinian peace negotiations.

"There's nobody on this stage who's more pro-Israel than I am," he says, adding that he has made "massive contributions to Israel," but needs to stay neutral in a negotiation in order to make progress.

He says he would love to give revived peace negotiations "a shot" and would make it a priority as president.

Rubio says Trump's stance is "an anti-Israeli policy" and says the Palestinian Authority "is not interested in a serious deal." Kasich says it's true that the P.A. is inciting violence against Israelis and adds he doesn't believe there is any "long-term peace solution" between Israel and the Palestinians.

9:52 p.m. Trump is asked how he would order the military to target families of suspected terrorists while abiding by the law. He says, "We better expand our laws."

"In large mosques all over the Middle East, you have people chanting death to the U.S.A.," Trump claims.

Rubio is asked if he would also order the military to kill the families of suspected terrorists and says he wouldn't.

Cruz says the answer shouldn't be that "Muslims [are] bad."

9:46 p.m. Trump is asked if he meant all 1.6 billion Muslims in the world when he told CNN's Anderson Cooper on Wednesday that "Islam hates us."

"I mean a lot of them," Trump says. "I will stick with exactly what I said."

Rubio is asked to weigh in on that comment and says, "Presidents can't just say anything they want. It has consequences."

"I'm not interested in being politically correct; I'm interest in being correct," says the Florida senator, who adds that while "Islam has a major problem on its hands" with radicalization, the U.S. will have to work with the Muslim community.

9:37 p.m. Asked what the GOP should stand for in 2016, Trump says he holds views that are similar to other conservatives, but says he's "different in one primary respect," which is trade.

Trade deals, he says, are "absolutely killing our country."

9:34 p.m. A week after the candidates engaged in personal attacks at their last debate, Trump remarks he can't believe "how civil it's been up here."

9:29 p.m. Cruz takes a subtle swipe at Trump, saying that any politician who doesn't acknowledge that Social Security is "careening toward insolvency" is "not being a real leader."

"We need to see political courage," says the Texas senator, who is proposing for young workers to put their Social Security taxes in personal accounts.

Cruz says he has proposed to cut $500 billion in federal spending and has proposed to eliminate five major government agencies: Departments of Education, Commerce, Energy, and Housing and Urban Development, as well as the IRS, according to his campaign website.

9:22 p.m. Rubio is asked what should the new retirement age be for obtaining Social Security and how much of the benefits would have to be cut.

"I'm against any changes to Social Security that are bad for my mother," says the Florida senator, who says he would propose a graduating scale over a period of time to change the retirement age to between 68 and 70.

Rubio says he wouldn't touch Social Security for people receiving it now, but warns that the U.S. will face "a debt crisis" if the program isn't reformed.

9:17 p.m. Trump is asked for his specific objections to Common Core and he says it's education by Washington, D.C.

Trump says former presidential candidate and retired neurosurgeon Ben Carson is endorsing him in the morning. He says they spoke for over an hour and says Carson "has a great handle" on education.

Kasich says the conservative opposition by Common Core is "hysteria."

Cruz says Common Core is a "disaster" and would "abolish" the Department of Education if he were to become president.

9:12 p.m. Kasich says he has a "comprehensive" plan to improve the government's immigration system.

"I would say we would absolutely have to finish the wall and guard the border," says the Ohio governor, who said for the 11.5 million people living in the U.S. illegally should have a "path to legalization, not citizenship" if they haven't committed a crime.

Cruz lays out his immigration plan and argues that the U.S. is bringing in "far too many low-skilled workers," which he says is "driving down the wages of hard-working Americans." The Texas senator accuses Democrats of "supporting illegal immigration" because he says they view them as "potential voters."

9:06 p.m. Asked how voters can trust Trump to run the U.S. government differently than his businesses, such as his hiring of foreign workers, he says, "Nobody knows the system better than me. These are laws, these are regulations."

Kasich, Cruz and Rubio address free trade deals and argue that the U.S. first needs to protect American workers. Kasich, for example, says there should be "free trade, but fair trade."

"I support free trade deals that are good for America," Rubio says. "We have to have access to the hundreds of millions of people in the world who can afford to buy things."

9:00 p.m. Opening statements: Kasich says the strength of the U.S. rests in families, neighborhoods and in the states. Rubio says "this is the most election in a generation" because America's identity and as a people are a stake. Cruz says this election is about ensuring Washington doesn't stand in the way of hard-working taxpayers. Trump says millions of people are going out to the polls out of enthusiasm and out love, says the GOP is taking people "from the Democrat Party," and that the establishment should embrace it.

8:15 p.m. The remaining four GOP presidential candidates -- Donald Trump, Ted Cruz, Marco Rubio and John Kasich -- will face off at their next debate at 8:30 p.m. at the University of Miami.

It also comes just a few days before the critical winner-take-all primaries next Tuesday where Ohio and Florida are at stake.